Work Trip - We Were in Palo Alto/ Stanford 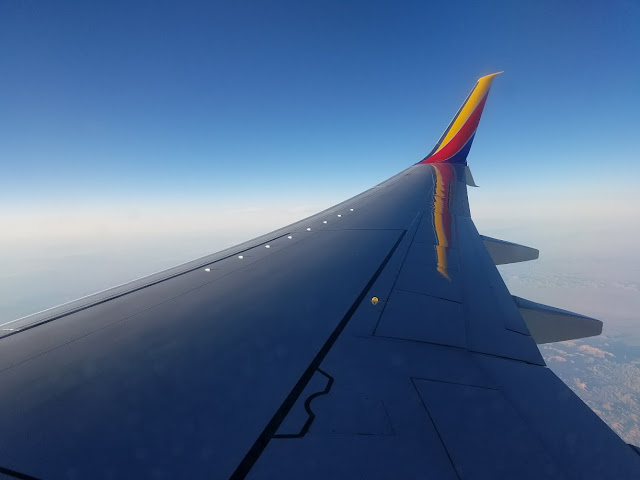 There's a bit of a travel season in Library-land, and it started this week (for me).

This week was a 72 hour turn around to Stanford to meet up with colleagues, plot the future, etc...

In my 9 years of working at my last job, where I traveled quite a bit, I never dealt with anything but the barest of inconveniences while flying or driving.  And, the bit of travel I've had so far with this gig, it's been the smoothest of all possible sailing.

Nothing "bad" happened, but Wednesday I was set to fly out at 10:30 AM to be in San Jose pretty early (I think 2:30 Pacific) so I could get my hotel, get some work done, meet up with colleagues to do dinner.  Instead a pretty standard issue awful spring weather system cut through Texas.


My flight was delayed seven separate times, the final time posted as 3:30 before they canceled the flight altogether.  I got a second flight that was Austin to San Diego to San Jose, landing at 9:30 or so Pacific, leaving Austin around 6:00.  I am glad I got to fly out, but that was 9 plus hours in the airport, mostly unable to work as I was having to keep my eyes on the flights the whole time.

Yeah, I feel bad for me, but the Southwest employees were doing their best in a tough situation, and I kept looking at these people with kids in tow and knowing I had the easiest of all situations to sort.  Aside from the fact the only food I ate all day aside from an airport ham sandwich came in Power Bar and Cliff Bar form, it could have been way worse.

Somewhere in there I was idly checking my email when I figured out I'd screwed up my hotel reservation and set it for the day prior - so they'd billed me for the night and canceled my reservation.  As you do.

I called and could get a reservation for that night, but not Thursday night.  So I got on booking.com, put in "Palo Alto" and picked the cheapest hotel possible - The Glass Slipper Inn.  The price difference between this place and most hotels in the area hit about $100 - 250/ night.

So, anyway, I arrived in San Jose around 9:00-something, but my bag did not.  I waited for the 10:00 flight to come in  (12:00, Central, so I was starting to get punchy) - and no bag.  What did give me confidence that I'd see my suitcase again was the Southwest employee who looked me in the eye and said, "we don't lose bags".  Fair enough.

Knowing that I could stay for another flight coming in and that would mean my bag would not be on the flight, or leaving and ensuring the bag would be on the flight, I left.  So, I bought $30 worth of airport priced sundries so I could bathe and clean myself up if my bag didn't show up to get delivered to me.

The first hotel I stayed at belonged to Stanford, was out at the atom smasher (because: Stanford) and was very nice, honestly.

At 6:00 AM I woke, called the front desk, and my suitcase still hadn't shown, but I showered - re-dressed, and at 7:00 was calling Southwest to have the bag sent to The Glass Slipper.

The meeting itself was a two-day event at Stanford, where I'd been once, but hadn't really seen.  I've been on a lot of campuses, but Stanford is its own thing, and if you get a chance, walk the campus sometime. 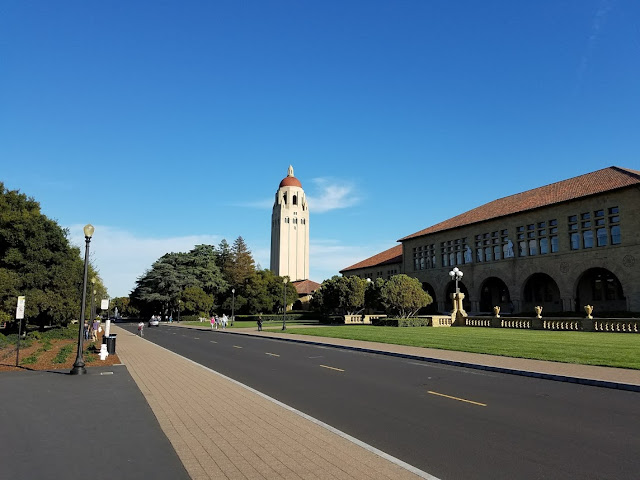 and my phone made this panorama, so enjoy:

After the first day of meetings, I Lyft'd with a pal who was staying a half block from me and we went and checked me in.

This, as I learned when I arrived, is The Glass Slipper. It's sort of an old-school themed motor-lodge that hasn't survived well into this century, but The Glass Slipper is still kicking it.  AND they had my suitcase!  It was a work trip miracle!

I have to say - that place was pretty boss.  It was one of the quietest hotels I have memory of staying in, and the staff were incredibly nice.  When I showed up, the owner looked at me and decided to upgrade me to a more comfortable room.  Which was the size of a full apartment.  Honestly, it was clearly formerly a home of some sort for motel staff.

No, I have no idea why he did it, but I am not complaining.  And I am fully recommending The Glass Slipper for all your sleeping needs when in Palo Alto.

I took a red-eye home.

At the airport, Jamie called with some bad news:  Lucy had hurt her front leg, which isn't great news as she has degenerative nerve issues in her back legs, so there's been a lot of toting Lucy around Saturday, but she's much better today.

My flight was direct, and of course a dude my size (I am a large fellow) sat next to me for the flight, so there was much figuring out of how to do this for the 3-plus hour duration.

That hotel looks a little surreal.

Normally I'm a careful traveler, but sometimes - I think - when things are looking bad, it's best to just trust the fates and see what happens. And I am often surprised how well that works out.