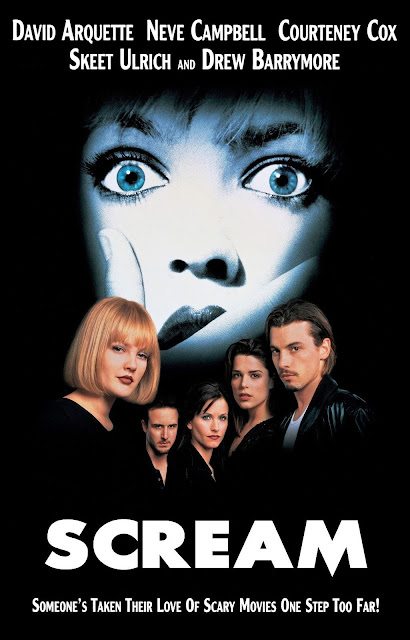 
I saw this movie the evening before it opened when JAL invited me and my roommates to come down to the theater he was managing for the technical screening.  At least that's how I remember it.

Anyway - it's kind of weird to watch now - what seemed incredibly innovative, narratively tight and clever from a commentary perspective has been imitated and repeated and baked into the genre to such a degree that half the horror films that come out are a wink of some sort.  But here in this first major take on representing the genre to aficionados and the general public - the cameos, homages and nods in the film are all pretty terrific.  And the movie may have helped give a second life to a horror industry and fan-base that needed something new as Nightmare of Elm Street and similar franchises had flagged and were being squeezed to death with unnecessary sequels.  Whether we needed 3 sequels and a TV show based on Scream is... debatable.

The cast is an interesting snapshot of the time - Courtney Cox having a laugh between seasons of Friends, Neve Campbell testing the waters after Party of Five and whether she would be the next Jamie Lee Curtis.  The curious Skeet Ulrich - who always felt like a poor man's Johnny Depp and who I assume is still working, but I couldn't say where.  Matthew Lillard, who had a star turn in Twin Peaks Season 3 and continues on, having ditched the goofy stoner persona.

What's now a bit chilling is seeing that this is a Dimension Pictures release, which means Weinsteins were involved, and so was Rose McGowan.  I've not read detailed accounts of what occurred between she and Mr. Weinstein, but I'll assume this movie was the or a nexus point.

The plot itself is windier than I remembered, and the misdirects and queues and clues all still work well even when you know the grand reveal.  And as it's been over a decade since last I watched the movie, details of how a lot of the movie plays out remains fresh, and the tragic backstory for Campbell's character is surprisingly effective as she peels away layers, largely by providing herself some distance and out of necessity of solving her current dilemma.

Some of what occurs in the movie you can tell was written and went before the lens just as new technologies of the time were just coming out and aren't reflected in the movie.  Simple stuff like *69, caller ID, etc... which both appeared in about 1994-95.

In an age before the internet, the sort of trainspotting of genre pictures or comics or whatever was sort of a thing.  Keeping that trivia in your head was a bit of a badge of honor for sad dudes like me (and is often called gatekeeping by people new to geek culture, and I'm very sorry people feel that way).  But it's interesting to see the encyclopedic knowledge play out with the characters as Ulrich's character and Jamie Kennedy's video store clerk not-so-casually drop horror film references at every opportunity, though with distinctly different angles in how they do it.

Also - remember how insane it was that they kill off Drew Barrymore in the opening scene?  I think people forget the movie was sorta sold as a Drew Barrymore movie, so that was kind of bonkers at the time.

All in all - it holds up terrifically well.