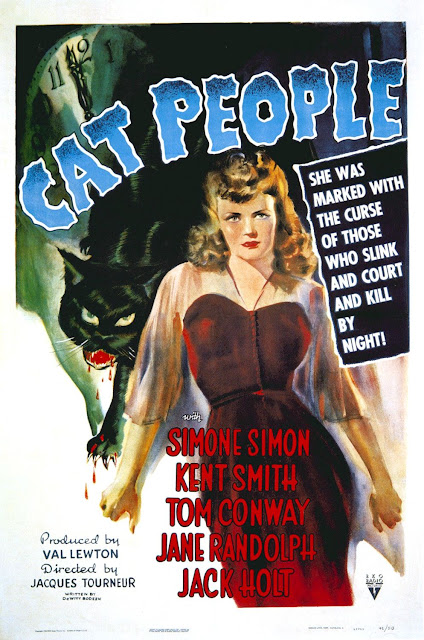 I wish I had not been so tired when I put it on, but I figured "now or never" as I was winding down my Halloween night, post trick or treaters and family heading home.
Cat People is one of those movies you see referenced a lot, and so I've tried to watch it several times and never get very far.  It is slow.  Molasses slow.  It has some interesting ideas and - if Simon and I maybe mis-programmed for the "is it all in their minds?" Halloween podcast, this one was the film to watch on the topic.

Simone Simon plays a Serbian immigrant who meets a nice American man, and the two fall in love.  I'll spoil it so you know what the movie is about: after agreeing to get married, she seems to decide it may be a problem that she's under the impression that if she has sex, she will turn into a giant leopard creature and kill her new husband.

This sorta puts a damper on the marriage.

Frustrated about hearing about her co-workers problems, another woman who works with the husband admits she's always been in love with him (and there ain't nothing wrong with her, so why he didn't notice her, I have no idea).  Realizing he's in a sexless marriage with a crazy person, suddenly the co-worker starts seeming like a real good idea.  Of course, then the other-woman starts getting stalked by a giant cat.

Look, I'm oversimplifying - there's some really interesting myth building and psychological exploration and good direction of Jacques Tourneur, who also did Night of the Demon and Out of the Past, two movies I thoroughly respect and enjoy.

Some time I'll rewatch the movie, but I'd honestly like to see it on the big screen or somehow without the distractions of home.