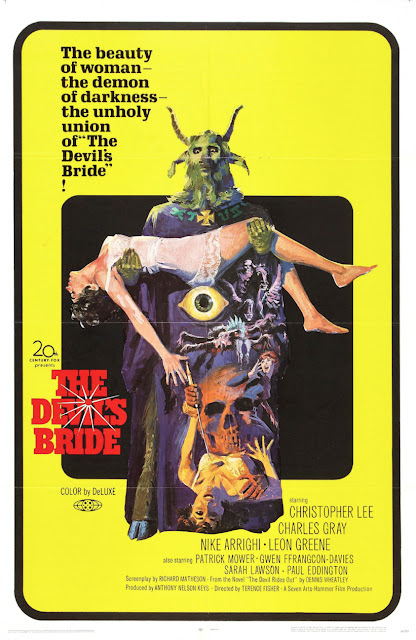 
Another Terence Fisher movie, this one with a script by Richard Matheson from a book (The Devil Rides Out) by Dennis Wheatley.

I hesitate to say too much and would encourage you to go into the movie a bit cold, as did I.  But the basic set-up is that Christopher Lee and his pal, Rex, are supposed to be having annual reunion of upper class British people or some such, but their friend's son, Simon, has stood them up.  In looking into what's what, they find that he's hosting some sort of "astronomy" meeting, which they peg for the meeting of a satanic cabal which it is.  Obviously.  Because their leader is Charles Gray.

Rex is focused on the lovely Tanitha, who, all I really think I'll say, is the titular "Devil's Bride".  She's played by Nike Arrighi who married an Italian prince and dropped out of making horror movies, I guess.

The movie is surprisingly intense.  Rather than beat around the bush about witchcraft and it's power while mostly talking about what *might* happen in sorta vague terms, this movie puts the power of evil on full display.  It's kinda crazy, weirdly literal, and feels downright menacing.  (SPOILER) I mean, how many other movies just go... yup, that there's the devil who's making a guest appearance at our half-baked-orgy. (END SPOILER)

Charles Gray was the villain in two Bond movies, but you may also remember him as the guy with no neck from Rocky Horror - and he turns that steely-eyed malevolence to good use here as Satan's wingman.  Formal, dickish, and absolutely here for the worst reasons, he's a lot of fun to watch as he glides around trying to make a better world for evil-doers.

I kinda dig that the movie doesn't hold it's cards, because it's a lot to keep up with, anyway.  Starting with spooky demon-appearances just means the third reel is going to contain some crazy stuff, and this movie delivers.  Hats off.

Had the movie been made a few years earlier or later, I'm not sure what we would have had.  The late 70's would have led to something maybe ridiculous and over the top, limiting the appeal.  The late 50's would have dialed back the scale of what plays out.  I'm not saying either is bad, exactly, but what we do get seems tied to its time.