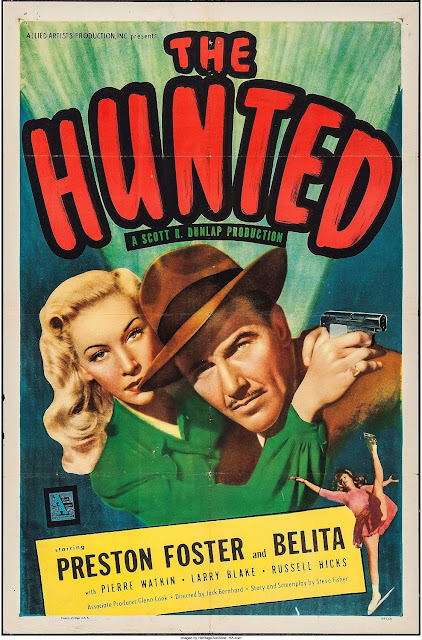 I was genuinely surprised how much I liked The Hunted (1948), a small-scale noir starring Preston Foster as a grizzled cop and former ice-skating champion, Belita.  The movie plays with a lot of the same second-guessing you got in 90's-era sexy neo-noir films like Basic Instinct, or, to a more awkward extent, Madonna-vehicle Body of Evidence.  While it's not been news for a detective to not be sure if a dame is going to hit the hay with him or put a bullet in him since at least when Mary Astor flirted with Bogart, there's mostly only one question here, and that's whether or not an ice skater is going to murder her ex, who happens to be the cop who put her away.

Our movie opens as Belita is released from prison and checks in with her parole officer. Apparently she'd been wrapped up with a robbery and was found holding the bag by her own boyfriend (Foster), who had been in love with her and had plans, but the bit of larceny kind of wrecked him.  She must have had quite the day in court when they sent her up the river, because - apparently - she threatened to kill her own attorney and Foster when she got out.

The two start to get cozy again as the death threats never come to anything and Foster does what he can for his ex, getting her a good gig where she can skate again (meaning this is the rare noir to feature a full ice skating routine!), when things get complicated and Foster starts looking at her again, wondering if he got it wrong.

For what appears to be a small, inexpensive picture, it does contain some terrific photography courtesy Harry Neuman.  Belita may not have the beguiling charm and acting chops of, say, Bacall - but he's able to light her just right and throw shadow across her from time to time to tell what's going on internally.  But it's kind of impressive how many shots this movie contains that seem like they came out of a "how to noir" handbook, from a detective in rumpled raincoat on a the street at night to a waitress looking like a deer in headlights in a diner in a roadside motel.

Whether Belita did it before or if she's wrapped up in it this time, it's a nice, tight little narrative, and while it doesn't come anywhere near Hitchockian obsession, the noir aspects of the dame leading the guy right into a gun barrel - and he knows it's coming, but he can't seem to stop himself - that make this movie better than it should be.
Posted by The League at 12/28/2018 11:53:00 PM