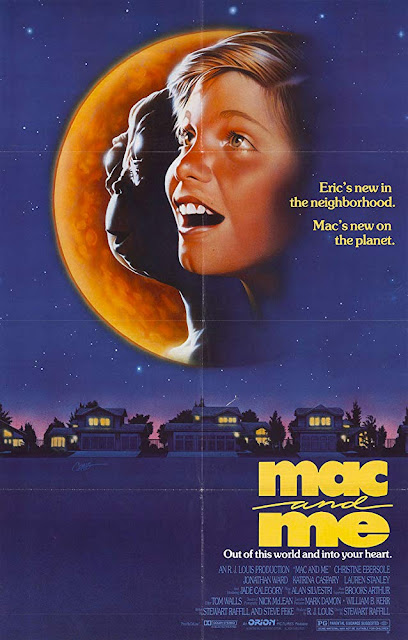 I'm late to the game on what has become "bad movie cult classic" Mac and Me (1988), the movie supposedly sponsored by McDonald's (wikipedia makes it sound way more confusing, and truth is usually stranger than fiction.  Seriously, the entry is a fascinating read) and intended to give kids a new flavor of ET with less budget and a shocking lack of charm.

It's just absolutely impossible to understand who thought the design and subsequent performance of Mac and his family was anything less than horrific.  Anything with giant eyes should be kinda cute, but instead we get something that looks like a pimpled ass for a head with the unmoving, open hole of a mouth just looking like either a butthole or the perpetually gaping maw of a toothless lobotomy patient.  It is @#$%ing weird.  But - the full body costumes for the adult aliens and their shambling, terrifying miming movements couples with staring, emotionless faces is a curious choice.  And a weirdly grotesque object lesson for creature creators across Hollywood.  The Face-Off judges would eviscerate this work, I assume.

Some of my favorite movies have egregious product placement (Superman: The Movie and Superman II, for example), but they aren't *about* product placement.  Spielberg's use of Reese's Pieces here gets swapped for non-stop placement of Coca-Cola as the drink of choice for our pucker-mouthed monstrosity.  And because of the creature design and failure of imagination and engineering, they just keep having him shove bendy straws in his face as Coke is the life-saving beverage he has obtained and his family has not (by the way, two cans of Coke restore the family to their full power after days lost in the desert).  Skittles get some placement, and we also make a trip to Sears, where the family single-mom matriarch is employed (and I'm pretty sure it's the same Sears seen in Brady Bunch).

But, yeah, there's an absolutely batshit scene in a McDonald's where a party breaks out (not the breakdancing party that's already going on in the parking lot when our heroes show up for a birthday party).  Also - one of the characters works at McDonald's and appears in the only tailored McDonald's uniform you will see on this plane of existence.

The ending is weirdly violent - kind of realistically so, I guess - as the local sheriff's department surround the Mac family and proceeds to start shooting indiscriminately.  I'd say it's off, tonally, but the tone of this movie is mostly a low, grating sound telling your brain to turn the thing off.

I don't really get it as the movie has a director with a few competently made films under his belt prior to this thing, but the wikipedia article really does hint at problems with the film being way, way out of his control, and in a collaborative process like filmmaking, a director working for a producer who sounds like he's out of his mind isn't going to make an Academy Award winner.  Or - in this case - a watchable film.

Weirdly, the score is by famed composer Alan Silvestri, a pre-nose-job Jennifer Aniston is in the background somewhere (I missed her), and had a known DP, Nick McLean, on board, I guess to make the movie look competently shot.