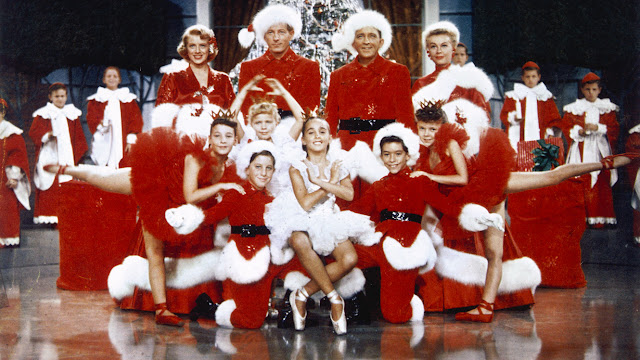 I watched White Christmas (1954) a couple of weeks ago and forgot to write it up.  It's a Michael Curtiz flick, which means it's automatically a decent sort of film.  I understand Bing Crosby thought the film's final product was a disappointment, and I have to say - there's something odd about the movie I can never quite put my finger on that doesn't work.

Likely my main issue is that the third act misunderstanding between Rosemary Clooney and Crosby makes no sense at all (and seems like a single question posed by Clooney's character would have cleared things up).  And I learned this viewing that the part played by Danny Kaye was originally supposed to be Donald O'Connor, which...  we'll just have to let our imaginations fill in the blanks, but some of what's in the script makes more sense if that's who you wrote the part for.

While mostly a bit of holiday fluff, it is an interesting peek into the Post WWII American mindset and does give us a bit of the returning soldier's melancholy as some try to find their useful place in society when they aren't commanding a regiment.