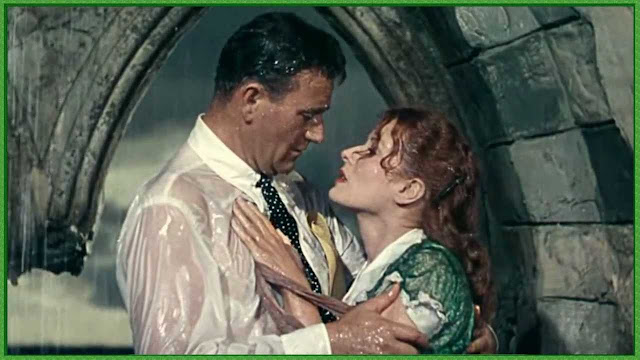 Not to be weird about it, and no surprise to longtime readers, but Maureen O'Hara was a screen-crush for me since catching Miracle on 34th Street back in high school.  Watching The Quiet Man (1952) did nothing to slow that train down.


By modern standards, I assume audiences would find it to be an infuriating movie - about a guy with now old-fashioned ideas about romance wooing and winning a woman with romantic notions based in some rural Irish tradition involving dowries and fortunes before the marital bed is probably a tough pill for the kids to swallow, what with their modern dating skillz.  But, look.  If you get hung up on modern social mores versus those of 1952, you're missing the point, and that's how you cross those bridges and meet each other where you live.  Valuing your partner's beliefs and finding how to work with them - Even if it means resolving your differences by bodily dragging your beloved across five miles of country side and then fighting her brother for another mile across town - is where it's at.

I promise, this is all deeply charming and romantic.

John Ford was known for his Westerns, but, the son of Irish immigrants, he clearly saw something in the story of Sean Thornton, a retired boxer who hung it up after accidentally killing an opponent.  The film is a Technicolor marvel, and won Best Color Cinematography in 1953, helped along by simply casting Maureen O[Hara and dropping her in her native Ireland, which is stunningly, gorgeously green throughout.

Every time I rewatch it, I'm amazed how the movie manages to be absolutely about sex without ever mentioning it and getting past the Hayes Code.  And it does have a complicated relationship with sex, acknowledging it and making certain it's an issue on the table as she withholds herself and then loses respect for her husband once he accepts it without everything settled.  And, of course, one of the Irish leads making an assumption when seeing their broken bed is one of the best takes in cinema.

The role of Mary Kate Danaher is an exceptionally difficult one to pull off.  In many ways, she's deeply unpleasant: fixed in her ways with the temper of a cranky badger.  But she's also not a character that the male characters mock, there's a mix of respect and fear for Mary Kate, but they've given her a wide berth, leaving her available.  Despite all the flaws, O'Hara manages to make Mary Kate likable enough that you can still pull for her - she's not necessarily being unreasonable - she just wants what she wants and can't settle herself til it's taken care of.  It's a comedic role, sure, but it's also one that both shows the vulnerability and iron will that Ford and company wanted to make sure showed.

I know the movie isn't for everyone - I'm pretty sure Jamie marginally dislikes it, but loathes McClintock!, which tries to repeat some of the energy of this film's finale without earning it.*  My folks straight up seemed mad I told them to watch it, which they did *after* touring the town where the movie was filmed and talking it up.  Sigh.  But I'll stand by it and be happy to discuss it any time.