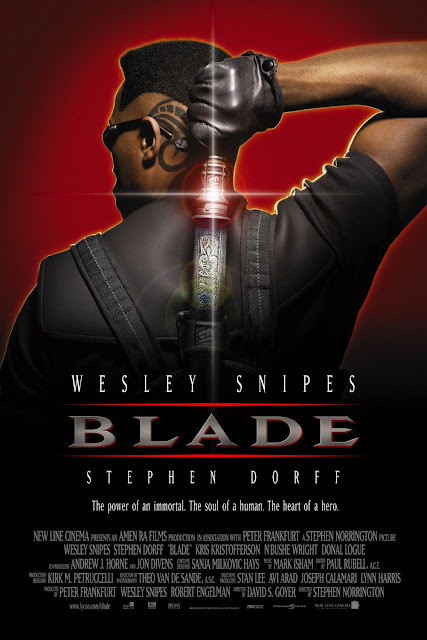 Watched:  10/07/2021
Format:  HBOmax, I think
Viewing:  Fourth?  5th?
Decade:  1990's
Director:  Stephen Norrington
So.
I saw Blade (1998) the first time in a theater full of people who had apparently had a LOT of sugar.  It was one of the theaters in town at the time where there was a higher than likely chance people would talk at the screen, and that was fine by me for a movie about Wesley Snipes killing 90's sexy vampires.
Mostly I remember at the end of the opening sequence, the place went crazy.  Like after a killer guitar solo at a concert.  I mean - Traci Lords at a rave as a vampire and then blood sprinklers at the drop, followed by Blade tearing the place up?  Yes sir.
I was never really able to separate the fun I had watching the film from whether the film was actually "good", but sometimes a movie is "good" because you had a great time watching it.
But, honestly, after seeing Blade III in the theater, I hadn't watched the first one again.  I basically remembered bits and pieces, the opening sequence, Kris Kristofferson looking like no one asked him to do wardrobe or make-up, and that Blade befriends the best looking hematologist I'd ever seen on film.
Much of the movie is... hilariously 90's.  Yelena Belova would make fun of Blade for being a poser.  There's a late 90's hiphop and "techno"/ "electronica" soundtrack I'd totally forgotten about.  And the villains are straight staple 90's villains with vampire fangs, including the now semi-defunct "hanger on, kind of crazy woman with whom the main badguy is definitely sleeping, and who bosses people around and dies badly".  And everyone looks like they're on their way to audition for The Matrix.
Wesley Snipes isn't bad, he's just incredibly restrained in his performance when he's not doing martial arts - which he is/ was an expert in, and you get reminded how cool it is when action is shot well and actors can do their own spin kicks.  But Blade's story is really spotty.  How old is he?  He was a bad vampire and then not?  The money is coming from where?  How do they live in this building?
Wesley ain't telling us, and this is the era before we dwelt too much on origin stories, anyway.
But then they throw his actual mother in at the end, and... it's super odd.  It feels like maybe it gets more oedipal than anyone intended?  and then doesn't go anywhere with it?  It doesn't even really add anything to the movie or character.  It's super confusing.
Stephen Dorff is our villain, Deacon Frost, and you get the feeling he's actually maybe too good for this?  Like, Dorff isn't my favorite actor or human, but he really leans into the part.
Udo Kier is there too.  Because why not?
Anyway, the hematologist (N'Bushe Wright)  isn't just there to be a damsel in distress, and lends more than a minor helping hand.  But I don't think she shows up in future installments?  After basically fixing vampirism with about 48 hours of labwork?  And saving Blade about four times?
By the way, the movie also suggests governments know about vampires, and maybe the populace?  I was never clear as to what was happening with the vampires.
In many ways, the movie is a very 90's actioner mess that I'm not sure you can get away with today.
I do know this is a 2 hour movie that has a stellar first thirty minutes and then a very, very boring 30 minutes and then kicks back into crazy action for the second hour.  I mean, it ends with vampires having their own ghosts tear out of their mouths as ghostly winged skeletons.  It's bananas.  The CGI is absolute garbage, but the idea is so wild, I was into it.  It genuinely is a pretty solid mix of action and horror.
Some people say this movie is really the one that launched Marvel movies, and I have no idea.  I don't know how many comic fans cared about Blade before the movie (maybe a dozen?), and I don't know that it's reflective of what worked in X-Men and Spider-Man that proved you could make superhero movies and people would see them - as I'm not sure how many people saw this as a "Marvel" movie, but a Wesley Snipes movie.  But I'm also willing to accept that it had impact in Hollywood and made producers more open to funding superhero films.  I tend to think of it as excellent archaeology of the Marvel archives to find a unique action character.
Director Stephen Norrington would go on to do another movie, and then - infamously - League of Extraordinary Gentlemen, and then not much else.  He's... fine?  But even at this scale, you get the feeling it's marginally out of his control.
Look - with 2021 eyes, this movie much more interesting artifact than a "good movie".  It has a lot of high points, and is worth rewatching if you were there at the time.  I cannot imagine the kids today would dig it.  It's not scary, really.  There's bouts of action, but also lots of talky bits (and Blade isn't the one talking).  The villains are a mix of 90's coke-dealer villains married to generic super hero mad science.
I mean... we need a drinking game when the villain's plan is to turn the population into whatever the thing they are, be it mutant, lizard or vampire.  Especially if there's a handy computer simulation showing the dum-dum audience "thing happens with lighty sequence, and then MOAR".
Posted by The League at 10/09/2021 01:05:00 AM