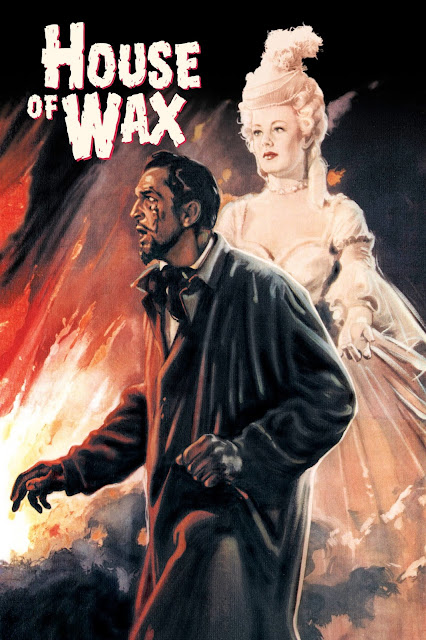 Watched:  10/04/2021
Format:  Amazon
Viewing:  Third
Decade:  1950's
Director:  André De Toth
I knew I'd seen this one again in recent years, and here's that post from 2012.  The one thing I'd walk back from that post is - yeah, this is necessary viewing.  I dig it.  You should watch it.
The movie has a terrific cast, great sets, really good make-up and costuming.  It feels high budget (I genuinely don't know if the listed $1 million budget was high or not.  I see Gentlemen Prefer Blondes, that same year, was $2.3 million, for comparison, and that movie looks super expensive.).  But, House of Wax made that budget back twenty-times over, including a couple of re-releases, one in the 70's.
The movie was also originally in 3D, and one day, maybe Alamo Drafthouse will show this in 3D.  That would be great.  I mean:  it's got an extended paddle-ball sequence that demands to be seen in 3D.
Of course starring Vincent Price, I read that this is the movie that took him out of a career slump and made him the American Master of Horror - which makes sense.  He's goddamn great as a clearly-already-maybe-off-kilter artist (who prefers to work in wax figures) and is pushed to murderous madness by a greedy business partner who dooms him to fire, along with his figures and gallery.
Price does the first of what would be many transformations for him, from Dr. Phibes to a handful of other damaged characters.   And the charm he brought to his roles in noir and crime films of the prior decade translates well when the playboy smooth delivery is imbued with an undertone of murderous malice.
The movie also features the lovely Carolyn Jones (in blonde curls, so you may miss her), the also lovely Phyllis Kirk as our main character/ early Scream Queen who realizes "hey, that Joan of Arc sure looks a lot like my dead roommate", Frank Lovejoy (fans of The Hitch-Hiker will recognize him), and a mute young Charles Bronson.
I admit, I kept looking at Bronson and thinking "jesus, that guy looks familiar".  Well, he's practically a kid here and has no mustache and lots of make-up.  Plus, he never speaks, so the indelible voice of Mr. Bronson is never heard.  Still, you'd think I'd notice the guy.
Now that I'm not thirteen, this movie doesn't spook me the way it did when I was 13 and watching it by myself in a dark house.  But I still like the Victorian morbidity and creeping horror of the thing.   I know stories well enough to see the "all the wax figures are dead people" thing a mile away, but it's still creepy.
I must not be alone in my appreciation of the movie as it entered the Library of Congress archives in 2014.
If you get a chance this Halloween, it's a good one for the spooky month.  And now I will finally watch the film it's based on, Mystery of the Wax Museum.
Posted by The League at 10/05/2021 11:50:00 AM

Let's see how things are going as we head towards the big Hallow-day. I need to watch the 1930's version, first. I also think I know someone who did a draft on that screenplay.