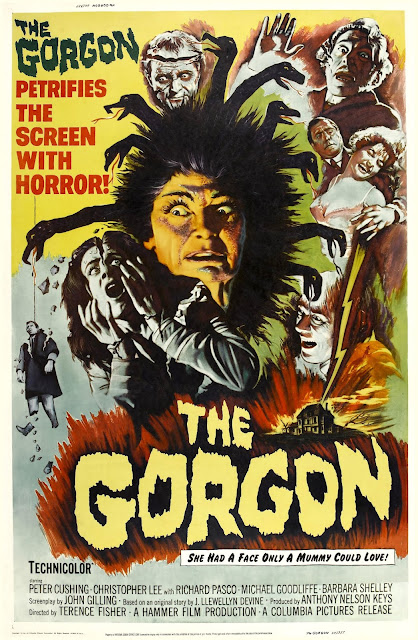 Watched:  10/02/2021
Format:  BluRay
Viewing:  First
Decade:  1960's
Director:  Terence Fisher
This particular film seems to get a lot of mentions as part of the non-Universal-remake horror output of Hammer Studios.  It's part of a 30-film set Jamie got me last Christmas that we haven't spent much time with - but Halloween seems like a fine time to do so.
I was deeply curious what something as complicated as a Gorgon might look like on a Hammer budget, and now I know.  And now you know:
We picked this movie because it co-starred Peter Cushing and Christopher Lee, and I recognized the name Barbara Shelley from other films.
The movie has a strong start, and then... slows... down.  And, weirdly, the film gives away quite a bit in the crawl at the beginning of the movie.  So... there's not much in the way of mystery as to what's going on as we're all pretty well in on it as an audience.
Our situation:  There's a Gorgon.  And it lives in a broken down old house.  And no one seems to care much.
What's bananas is that the story takes place in a paranoid pre-WWI European police state, and even with that, no one just goes and burns down the old house.  No one even brings it up.  They all seem to know something is in the house, but like a fart in a crowded elevator, they just don't talk about it, and instead create elaborate and disprovable fictions about how people died WHEN THEY WERE TURNED INTO STONE.
Add in:  an artist is framed for killing his pregnant girlfriend (she was Gorgonized), but his family members are the main characters of the film so stay in his house, which has a prominently displaced nude.  Also - if you look, charcoal sketches of the actress who was his pregnant girlfriend topless.  Clearly Hammer was figuring out what they could slip into a film already by '64.
What's curious is that the women in this, typical of Hammer, look tops.  Well done, hair, make-up and wardrobe!  All the men look fine... except everyone seems to be made up to look older than they are.  Or, in the case of Lee, like they're trying to travel incognito, but not really.
Cushing plays a scientist/ doctor who seems particularly concerned about keeping the Gorgon on the QT, and has a penchant for his lab assistant, Shelley.  A guy who looks like a very adult version of Draco Malfoy shows up after brother and dad are dead, and wants to get to the bottom of the mystery, and, very quickly, Barbara Shelley.
SPOILERS
I guess Barbara Shelley was the Gorgon sometimes.  Really, I feel bad for actress Prudence Hyman, who plays the not Barbara Shelley version of the Gorgon (see above) who everyone keeps saying is hideous.  Like, my dudes, you gotta do more than paint her green and put snakes in her hair to make that claim.  This is 1964 and we know green and crazy hair means James T. Kirk is minutes away from showing up at her doorstep with Romulan Ale and a dozen roses.
I want to say the movie is fun, and... it is.  In bursts.  It's never scary, and kind of dull when Cushing or Lee aren't on screen, I'm afraid.  It jut never quite hits the right notes of some of the rest of Fisher and Hammer's stuff I thought was better.  Which is too bad, because the beginning is great and they do have a good cast assembled.
Posted by The League at 10/04/2021 11:30:00 PM