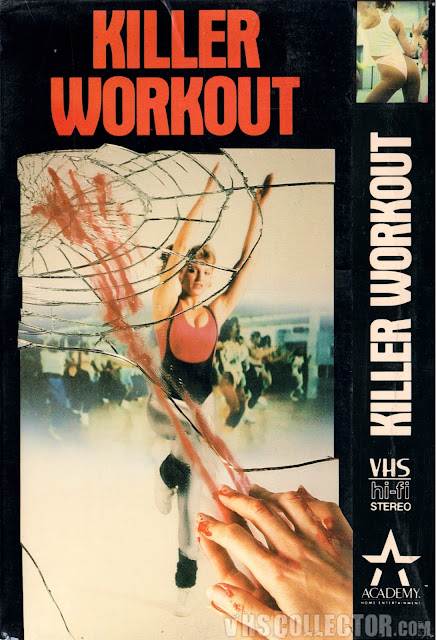 Watched:  10/21/2021
Format:  BluRay
Viewing:  First
Decade:  1980's (so, so 1980's)
Director:
A few weeks ago, tweeter Dr. PopCulture BGSU posted a picture or two from a movie of which I'd never before heard discussed, Killer Workout (1987), and I vowed to watch this movie at some point.  Well, our own JimD decided, YES, we would both see this movie, and so a copy showed up in the mail.
I am genuinely supportive of the genre film preservation going on in weird little corners.  There's basically no reason anyone should work to preserve and distribute Killer Workout.  It's a very low-budget film with no bankable stars, bad cinematography, as wobbly a plot as you're going to find, and zero logic.  Sort of.  But.  Movies like this were an important part of the cinema world for a long time, and they've mostly disappeared as VHS players and tapes have headed to the bin.  It's weird that we may lose a lot of movies because of dedication to a format.
Olive Films is a newer but growing distribution company doing good work out there, bringing a wide range of film types to the market - from respectable classic film to.... Killer Workout.  They seem really cool and I need to spend more time reviewing their catalog.  I would LOVE to know more about their efforts to preserve and distribute films - but I have a lot of questions about their presentation of Killer Workout.  It *seems* like they had an idea to not just get the movie out there, but retain some of the VHS experience.
The movie itself is... maybe not great?  I liked star Marcia Karr well enough, and the main throughline that almost reads like a Vincent Price movie.  But there's a lot of time spent with men posturing in ways that are... stunning.  And I still can't tell if the writer/ director was serious or not.  I thought the movie was introducing too many elements, some of which were nonsense, but upon reflection, it all DID work together better than it originally seemed.  But there's a whole case study in both male gaze as well as misogyny as fact in a movie watching this thing.
And, you can't escape the workout outfits of the 1980's, which were as much about being seen at the gym as they were about not sweating in your street clothes.  And, of course, impacted superhero outfits to no small degree (see: 1980's X-Men).
There's a lot of ducking and weaving and asking "where is this going?" and "how bad are the cops here?  They seem very bad."  But the last ten minutes almost makes up for it.  I mean, I was cheering on our killer.  The physics of the murders literally make no sense in 9 out of ten cases, but I'm rolling with it.
Weirdly, my favorite bits in the movie included unlikely placement of a telephone in what HAD to have been a late addition of a sequence and the final murder of the film and the timing of the bit.
The next year, a movie entitled Death Spa about another death-laden gym was released, so I guess I have to see that, too.
Posted by The League at 10/21/2021 04:06:00 PM