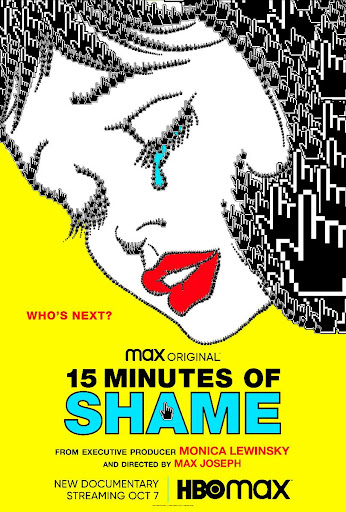 Watched:  10/19/2021
Format:  HBOmax
Viewing:  First
Decade:  2020's
Director:  Max Joseph
There's something weirdly "student film"-ish about this documentary.  From the "let's start this with a quote" business to a third act diversion that isn't actually on topic, as interesting as it is.  It's the sort of "this is too good not to rationalize its inclusion" stuff I found myself doing when working on docs in college.  It also locks into a political POV that I think keeps the film from reaching a necessary and broader audience, undermining its impact.
But - the overall premise and most of the talking heads are great.
Co-Produced and narrated by Monica Lewinsky, the film looks into how the internet has weaponized shaming/ cancel culture, but really how you can wake up one morning and your whole life is now public and awful, and you have absolutely no say in how it plays out.
Subjects include The Guy Who Sold Hand-Sanitizer for Way Too Much, The Guy Who Inadvertently Flashed What Looked Like a White Power Sign at a BLM Protest, The Lady Who Made a Harsh Comment About Ventilators and a Young Woman Who Was Targeted By White Supremacists For No Reason Other Than She is Black and Educated.
The first three made perfect sense to me in the context of the film.  We get to hear from the people who did something semi-innocuous or which was misunderstood (or misreported), and wound up losing their jobs, getting death threats and ending up in therapy.  The last, not as much.  All this person did was run for student government and win while being Black.  It's not "shame" in any way, like, say, everyone finding out you were up to hanky-panky with the POTUS.
But, the doc does provide food for thought.  There are plenty of academics and experts to talk about the nature of how the internet rage machine works (and it is a machine, and it absolutely lives off of rage), as well as those who talk about how the brain works and what we're up to as we retweet those things we take as rage-inducing from everyday people, celebrities and politicians.
The wide reading of Section 230, which is always under discussion, is investigated, as well as what other countries are doing.  As a Freedom of Speech guy, I twist myself in knots thinking about how you allow for FoS while also keeping Boris and Natasha from using FB to convince your grandparents that the President is a Lizard Alien.  We can't, it seems, appeal to critical thinking or logic.  Or count on it, at any rate.
In truth, I know I've participated in no small amount of rage-re-posting, but had already been working to make sure I've dialed it back over the last two years. But, look... the takeaway from the whole thing is really:  you don't need to participate in that endorphin rush of barreling in to make sure you're also showing your outrage about a private citizen.  You don't know the whole story, the context or even if anyone has it right.  And that includes reporting by folks like The New York Times, who also live off clicks these days.  (I don't know how often you've seen something you know about show up in the press, but I'd say they get maybe 1/2 to 1/3rd of the details incorrect).
Frankly, this should have been a series.  There's a lot to unpack here.  An hour on Section 230.  An hour on how Twitter and Facebook make money and why the algorithm is now programming us rather than us, it.  Discussions with not just the subjects, but the people around them.  And, certainly, looking at how the press uses tweets as an indicator of *something*.
We need to talk about what we're doing online.  We have to understand our momentary fury over something we aren't there for and don't fully get - no matter the larger and global forces at play which this individual *seems* to reflect.  Maybe we shouldn't be so quick to hit that RT button any more than we'd think of driving someone off the road for cutting us off.
Lewinsky's third act here as a shame expert is... fascinating.  She's owning her Scarlet Letter, and talking about it and holding the mirror back up to us.  As someone her age, in the late 90's, I myself, thought of her as a twit with no perspective.  Given what she's signed off with on Impeachment, I'm not sure she would entirely disagree.  But, yeah, it's a good and necessary conversation and she's got the POV now to really take it head on.
Posted by The League at 10/19/2021 08:35:00 PM