Vincent Price Watch: The Pit and the Pendulum (1961) 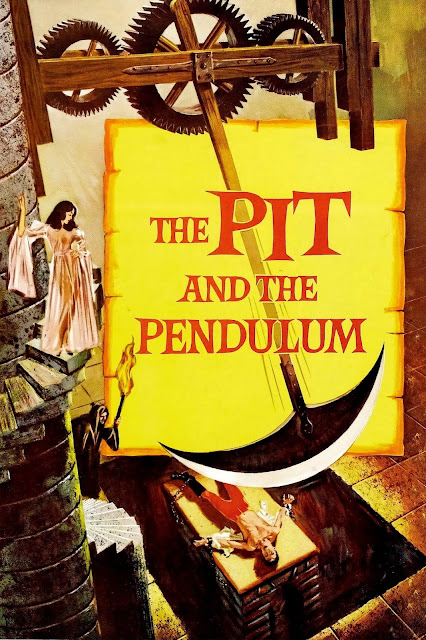 Watched:  10/17/2021
Format:  DVD
Viewing:  First
Decade:  1960's
Director:  Roger Corman
It is insane that I've never watched this movie.   With Corman directing, Vincent Price starring and a set-up that would become classic and - as Jamie pointed out - feels positively Bond-ian, it's a fun watch.
It's a period piece, sometime during the Spanish inquisition (don't ask me when.  They're wearing those frilly collars I think of as 16th Century), and the events are around fallout of the Inquisition.  It's a genuinely screwed up story, maybe more thriller than horror, but there are genuine moments of creepiness and chills here and there, which I frankly wasn't expecting.
I can say this:  I had no idea what was going to happen til it happened in this film.  I mean, I knew we'd get to a Pit and, likely, a Pendulum, but the tension building works, there's just the right twists here and there to keep you off balance, and then Price's performance in the film is really, really solid.  He's doing some next level stuff here, which I know he can do - so it's great to see him stretch his range here in this film and hit all the notes.
The movie also stars Barbara Steele, who is one of the actresses that genre fans adore, and with good reason from what I saw.  I've just not seen a ton of her work, but she's terrific here.
Anyway, I'm realizing if I say anything, I'll spoil the film.  Go give it a watch - it's a good one for the spooky season.
Posted by The League at 10/18/2021 12:00:00 AM