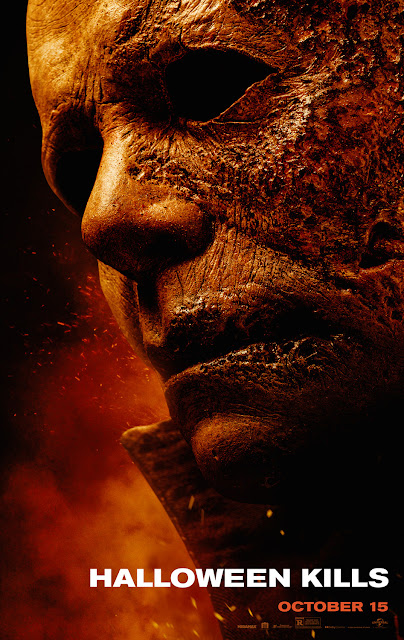 Watched:  10/20/2021
Format:  Peacock
Viewing:  First
Decade:  2020's
Director:  David Gordon Greene
SPOILERS
So, this isn't a movie, it's the second act of a three part film about Michael Myers and the residents of Haddonfield.  Maybe the third part of a 4 part film, if you want to think of the 1978 film as the prelude.
I haven't read anything about the movie as I was trying to avoid spoilers, but it's got a very low reviewer rating on Rotten Tomatoes, which... fair enough.  Horror sequels usually stand alone, using some of the same characters.  But, much like Halloween 2 from the 1980's (now erased in this continuity), this chapter acts more as an extension of the prior film.  Halloween 2 picked up as Laurie Strode was whisked away to a hospital and Myers tracked her down.  This one does similar - picking up from the end moments of Halloween 2018 on the same truck ride where we left the Strode women.
But - this film opens the iris a bit.  Laurie Strode wasn't the only person impacted the night Michael Myers came home in 1978.  He killed a number of people who had families or were babysitting kids or what-have-you.  40 years later, some of those kids and people carry scars.
We get some flashbacks to that first film, mixed in with some re-created footage of that night so we can get some context of who the characters are as we meet them again - from cop to the little kid Laurie was babysitting.  Anthony Michael Hall is unsurprisingly good as Tommy, now a guy at about 50 who remembers the events and knows that the town has forgotten, letting Myers slide into myth over the decades.  But as an eye witness, he's haunted - and brings with him other collateral damage of that night, who seem to have bonded over the years as the only ones who really know and remember.
Perhaps quite reasonably, while the Strodes are dealing with their business at the local hospital (see echoes of Halloween 2), Tommy rallies the locals to hunt down Michael Myers.  If everyone is looking for Myers - he can't hide.  Much like Halloween 2, Laurie is sidelined for much of this film, dealing with the gut-wound she received in the prior film.  But here she doesn't just wake up and start screaming again.  She's still taking action and trying to get things done.
But the movie does indulge - over and over - in the dumbest of horror movies tropes.  Ie:  People split up.  Whether it's two cops checking out a house or a domestic couple looking around their house knowing someone is in there, or cars of people not going in pairs...  the first thing everyone in this movie does is go it alone.  And it makes zero sense.  Except that I know whenever there's a noise, Jamie's the first to say "go check it out" so I can get killed and she'll be fine.  We work by Scooby-Doo rules around here, I guess.
But the movie also does not want people acting together.  Not out of "fear", anyway.  A valid point is made about the nature of mobs as the traumatized family members of Michael's victims converge on the hospital and the police seem to refuse to take action - that they mob up.  Especially believing that Michael is stalking Laurie, so he'd be coming there in particular.
But when the mob then (again, spoilers) encircles Michael - the movie wants to also tell us that was the wrong choice, and suggests they should not be acting out of "fear".  But is shelving the alternative for a the final chapter, I guess.  But that's a year away, and it leaves us hanging with a magical Boogeyman who can withstand any physical punishment, and that's a take, certainly.  I mean, Michael is about 61 here and he's making his way through the townsfolk like he's Marshawn Lynch playing middle schoolers.
I suspect we're to get a lesson about mercy and understanding as the movie pivots the entire Laurie v Michael conflict as a misunderstanding of motivation (which actually makes a lot of sense.  Why the hell would Mr. Casual Killer care about one particular person he doesn't know?), and we learn - really - Michael is just trying to get home.  And, the side storyline about the cop NOT shooting Michael sure gets a lot of play.
Really, I was fascinated by the fact the movie acknowledged and included the other survivors (some played by the original actors) and dealt with them dealing with their trauma and a chance to get back at the source of their trauma.  Of course, it all goes wrong, and I'll be unpacking that for a bit once we get to the third chapter here.  But I also get what the movie was saying about mobbing up and how you can wind up doing yourselves a whole lot of damage once you pick up a gun or kitchen knife.
And here in 2021, I am much, much more willing to believe that people will do the dumbest thing possible when it comes to dealing with a stressful situation.
Anyhoo...  I actually enjoyed watching the movie quite a bit.  I guess other people didn't like it.  Oh, well.  I'll be the guy who was fine with it.  Could have always used more JLC, but what are you gonna do?
Posted by The League at 10/21/2021 12:57:00 AM

I have not! That is awesome