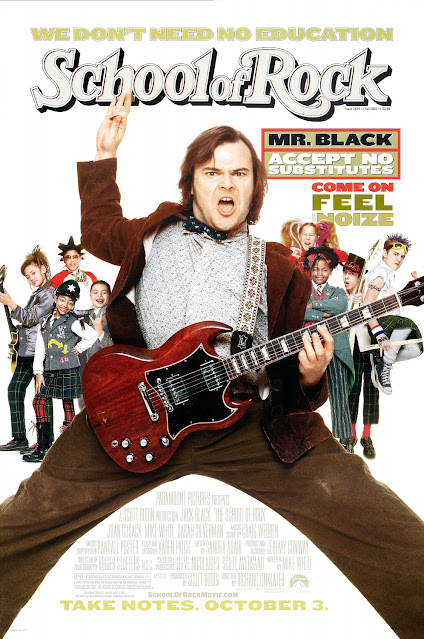 Watched:  11/16/2021
Format:  Netflix
Viewing:  3rd?
Decade:  2000's
Director:  Richard Linklater
I still think of this as a new movie, but it came out almost 20 years ago now.  So, that's how time works, kids.  All those adorable moppets are now adults in their 30's.
School of Rock (2003) is a sweet movie about someone who would absolutely land in an extraordinary amount of legal trouble and have trouble ever finding work again if the events of the film occurred in real life, not to mention taking Joan Cusack down with him.
I won't summarize, you've all seen the movie or get the basic gist.
Upon a re-view, I guess I decided that the movie is weirdly and profoundly lazy about its set-up and execution - something that bugged me the first time I saw this and now just feels confusing from a movie from a major studio.
No plausible reason is given for how someone could have a trap set and electric guitars in a classroom for 3 weeks, for hours per day and no one notices.  No explanation is given for what the kids are or aren't telling their parents, what homework is missing, etc...  Like - all they had to do was have the classroom exist in another building and have Dewey learn to teach a little to assign out homework, and these things would have been taken care of, plotwise.  And, admittedly, I didn't care much the first time I saw the movie, but on a re-watch, it breaks laws of physics when not seeming incredible that parents paying $15K per year for their kids' tuition aren't checking on their homework and studies.
Not to mention that after the climax, no lawsuits are issued and parents send their kids to hang out with the single most irresponsible adult most of these kids will have encountered up to this point...   It's wild.
The movie also was released at a very weird time.  I'm not saying "rock is dead", but it's definitely on life support, and 2003 was not the heyday of rock for anyone but probably a few hardcore Strokes fans.  The film is a Gen X celebration of our obsession with Boomer rock - which is exactly my sweet spot, and I was sad hearing Ramones and thinking how long it had been since I'd put them in rotation.*
I'm not sure this is actually a good movie.  Jack Black is fine.  Joan Cusack is truly better than him in all of her scenes and she's a huge highlight of the movie.  It just feels like a mess of a story that starts with a fantasy conceit and refuses to acknowledge reality any more than the lead character will accept it.  The movie has some partially formed good beats, but there's just too many kids to have much in the way of an arc for any of them, and Dewey's arc is... him finding out kids are neat?  I really am not sure.  He mostly just creates a chain of chaos wherever he goes, while lying to literally everyone around him starting at the minute 7 mark of the movie and carrying through to the forced reveal.
Also, Sarah Silverman is so weirdly miscast in this movie, it boggles the mind.  She's not bad, but once you know Sarah Silverman, casting her as the shrill girlfriend seems like a crazy choice.  Not that I don't want her to get a dollar every time this runs on TNT.  I guess I have feelings about Sarah Silverman being underused as an actor, and this is a reminder of how that would happen.
The movie just won't do the basics to earn a cursory pondering of the film's set-up.  It's funny, I like the final performance, but...  seems like the movie got phoned in way early in the process.
*now listening to Mania and I'm good
Posted by The League at 11/17/2021 12:13:00 AM