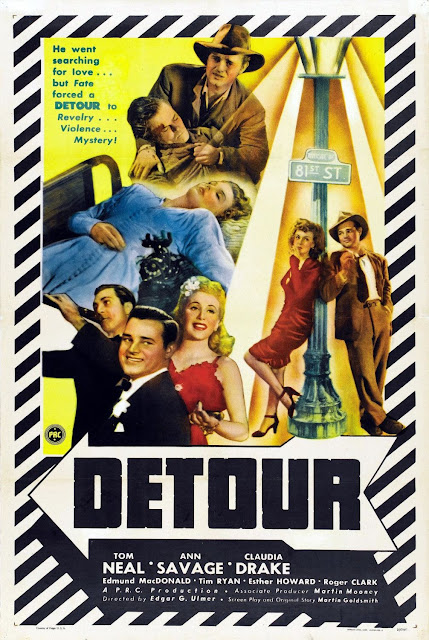 Watched:  11/16/2021
Format:  Amazon Watch Party
Viewing:  Unknown
Decade:  1940's
Director:  Edgar G. Ulmer
Detour (1945) is a bitter, furious bit of pulp noir with no budget, no bankable stars, cardboard sets and a half-assed set-up, and it is absolutely impossible to stop watching once you start.  And, that's at least 85% Ann Savage, who doesn't even show up til the 1/3rd mark.
It had been a while since I'd watched Detour, but Jenifer selected it for a Tuesday watch party, and I was delighted she did.  I have no idea what spawned this movie or even how it got made.  It doesn't feel like a war-time picture, but it does suggest what would come in the months and years following the war.  It's just lacking the gloss the studios would put on something like this - hard-scrabble talent working off a half-finished script and utterly buyable as drifters and wastrels of pre-War America.
Tom Neal plays a pianist in a bar who lets his lad-love head from NYC to Los Angeles with plans to follow.  Eventually and financially not ready to do so, he hits the road and falls on hard times until he's picked up by a guy playing at being a wheel.  Who promptly dies on him, making it possible someone will think Neal killed him.
He then picks up Ann Savage as a hitchhiker who knows Neal is not who he pretends to be, and she just decides to make his life hell for it.
It's hard to think of another role like this in another film.  She's spitting vinegar and venom from when she shows up, she's a road-weary mess, and she's threatening Neal - but it's weirdly sexy?  With his balls in her hands, she tries to bed Neal, harasses him, threatens him with the law... it's bananas.  And has deep, deep undercurrents of someone's particular fetish.
Stylistically, it cuts between the club scenes of NYC in stylized flashback (they can't afford walls and whatnot, so it's often played in an almost surreal blank backdrop or fog).  Or, it's the burnt out scrub of the far western US highways and the towns along the highways.
I have no idea who would have seen this movie upon its release or what the distribution was.  Or who it was even for.  Nor am I really aware of how it's become a sort of cult favorite among classic film and noir buffs.  I just remember seeing it suggested decades ago, and because its fallen out of copyright, it was easy enough to get.  And should be for many to find.
Arguably, a lot of low-budget crime movies have tried to emulate the sort of "average guy gets in way, way deeper than he intended on the road or in a remote location" sort of thing this movie pioneered.  But Ann Savage is so singular in her performance here, she makes what might have been a cult curiosity a must-see.
Posted by The League at 11/16/2021 11:09:00 PM