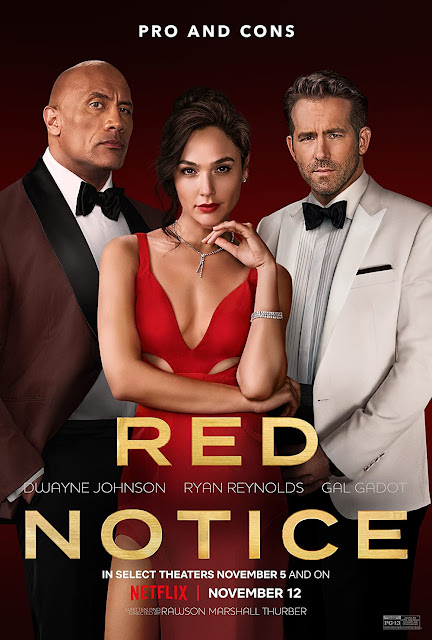 Watched:  11/17/2021
Format:  Netflix
Viewing: First
Decade: 2020's
Director:  Rawson Marshall Thurber
I'm *fine* with Ryan Reynolds, Dwayne Johnson and Gal Gadot.  I still watch movies because they star particular talent, but most of those actors have been dead for more than 10 years or way longer, and I guess there's a few people I'd show up to see just because they did a thing.  But it's more likely I'll avoid a movie as long as possible if there are particular actors starring.  None of the three here fall into the "must avoid" category.  They're all... fine.  You know more or less exactly what you'll get, and Red Notice (2021) is not here to blow the door off of those expectations.
Best case scenario, Red Notice is a fun way to introduce your tween to heist pictures and globe-trotting comedy-action-adventure.  There's a lot of A-Team style bloodless gunplay where no one is ever shot, people crack wise, and it's all a big goof.  It's not a new format, and this one is particularly gentle, so it's a good entry point.
For those of us who've been around a lot longer than 13 years, it's a weird movie.  It's aware it's not doing anything new and comments upon it in-movie (Ryan Reynolds has decided he's just Deadpool now in everything, I guess).  But it also doesn't really do anything with the fact that it's self-aware.  It's still a movie where folks like you and me might not be positive exactly what twists and turns will show up, but we know they're coming from a mile away.
It's a pretty basic heisty flick with  numerous action beats, some of which you've seen before.  Lots of punches, a scene showing off Gadot's mastery of the polearm.  But it's not all action - there's standing around in bits and spurts.  Some curious ability to travel internationally and change wardrobes despite a lack of clothes, wallets, passports, etc...   The movie even indulges in some unearned melodrama that ends on a cliché of a cliché, which somehow goes uncommented.
In short, if you already have a Netflix subscription, yes, this is where you'd wind up watching this movie, anyway.  Actually paying to see it in a theater would be a weird choice.  It's a Target-end-cap movie that is going to just hang out there uncomfortably for a bit as you wonder who needs to own a copy as you stand there with your unnecessary plastic objects.
It also believes it's the start of a franchise, which can so often be a terrible decision (see: The Man from UNCLE.  Or, rather, do not.).  They want to set up an origin story instead of just telling the story.  But even the arc of the buddy-heister relationship between Reynolds and The Rock never quite gels as they're planning to do something with that in sequels, I guess.
It wasn't awful, but it's clearly an expensive-enough film, just with talent on the screen, the stunts, sets and the FX.  But it's...  just not something I will think about again.
Posted by The League at 11/17/2021 10:36:00 PM

I read Netflix spent $200 million on the movie. More than Dune!

That literally makes no sense, especially as it looked like the entire movie was green screened every time they were outside.

I looked it up to verify.

a big part of Red Notice's colossal budget was designated exclusively for its three stars, as nearly one quarter of its $200 million went directly to Johnson, Gadot and Reynolds.

Why Red Notice Looks So Cheap (Despite Netflix's Biggest Budget)

Well, I am not sad that Gadot is being given piles of money, I guess.