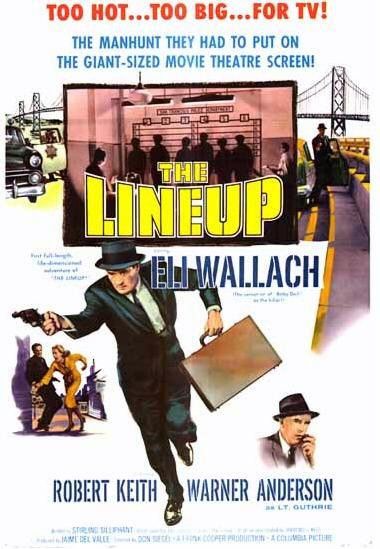 Watched:  11/16/2021
Format:  Noir Alley on TCM
Viewing:  Second or third
Decade:  1950's
Director:  Don Siegel
I had seen The Lineup (1958) years ago, and remembered it was crazy and Eli Wallach was fantastic, but not much else.   It was part of a set of DVD's I was watching in quick secession, and I just didn't get back to it.  Which is too bad, it's a cool crime movie.
Bay Area residents will want to watch it just to see the locations in 1958, some of which are long gone, but most of which are still standing (something Austin would find horrifying.  We knock everything down, willy-nilly.).  As a police procedural in the years after The Naked City, the city itself is more than a backdrop, its geography and environs are crucial and inform everything, from the hook of the plot to the finale car chase.
Meanwhile, the cast is kind of interesting.  There's the aforementioned Eli Wallach, but he doesn't enter the movie til the 1/3rd mark, along with Robert Keith (who I just learned is the father of Brian Keith) as a pair of heavies/ hit-men in from Miami.  A baby-faced Richard Jaeckel plays their driver hired on by The Man - the mastermind pulling the strings.  Raymond Bailey (Mr. Drysdale from The Beverly Hillbillies) a manager of the San Francisco Opera who is involved in the case and Emile Meyer who seems like he's always a cop plays one of the lead detectives.
The basic plot is:  (SPOILERS) - drug runners are loading unsuspecting tourists up with valuables and goods as they depart Hong Kong and Japan that are secretly carrying packets of heroin.  The plan is then to steal from these mules on the other side of the journey.  The basic idea is that the dupes won't be looked at too hard by the port authorities and no one has to be paid to carry the stuff.  However, the plan falls apart when a twitchy cab driver crashes with a stolen suitcase, killing himself and a good cop.
While the cops look into it - the aforementioned heavies arrive from Miami to go about tracking down the goods.
And I'll say - maybe this has it's origins in Hemingway's The Killers and what they did with that on the big screen.  Or maybe this the idea came from Goodis and was translated from his book Nightfall that the same screenwriter as The Lineup adapted, Stirling Silliphant adapted, but the weirdo crooks going about their business is it's own little corner of noir, and more or less eventually informed things like Pulp Fiction and therefore 90's cinema and television.  But certainly I'm thinking of Murder By Contract.
In this case (and this is what I forgot I liked about Wallach here), Wallach is a bonafide psychopath trying to learn how to blend in and play at normalcy and respectability with the help of Robert Keith, who is a different flavor of psychopath.  He's an observer, fascinated with the inhumanity of his own partner, treating death and criminal behavior as an academic study.  But as Wallach has rules for how to operate, so, too, does Keith have rules and opinions about what makes crime and law enforcement work - and, we learn, he has some major hang-ups about women leading to a terrifying scene between him and a young mother.
Wallach is clearly taking his cues from a new generation of actors here - but is surrounded by the old guard.  And that's fine - when he pops off, it feels that much more dangerous.  His manhandling of a doll at one point feels brutal, and the frothing monster he is beneath the exterior has a buyable quality rather than a "stage crazy" effect.  Which is odd in contrast to Robert Keith who should feel much more old school than he does - because that guy's illness is much better hidden and maybe creepier, and he makes it work (and he's got a couple of decades on Wallach).
The characters we spend time with and who don't feel like 2 dimensional stand-ins are the crooks in this film - the creators understanding that the crooks could inherently be more interesting in this story than straight-laced salary men putting the picture together.  And I suspect the filmmakers had some fun with what they were doing with those characters.
As I'll often say, San Francisco is simply visually interesting, and I believe the film makes the most of it - playing with the backdrop of the city, with changes in elevation, with the architecture and more.  It's not a film that would play with shadow much - it's late 50's noir worrying about selling to TV eventually - but there's some great stuff in this movie.
Anyway - the film moves at a hell of a clip.  Siegel's sense of pace and story and framing is comparable to modern film in many respects.
It's not one that ever hits you with any particular emotional beats or leaves you chilled after, but it does deliver on a fairly solid script.  Except....
The crooks' plan sucked.  I mean, it was awful.  Half of the people found the drugs by accident, and then you need to retrieve the drugs?  This is a lousy plan, and everyone involved deserves what they got just for being bad planners.
Posted by The League at 11/16/2021 02:51:00 AM