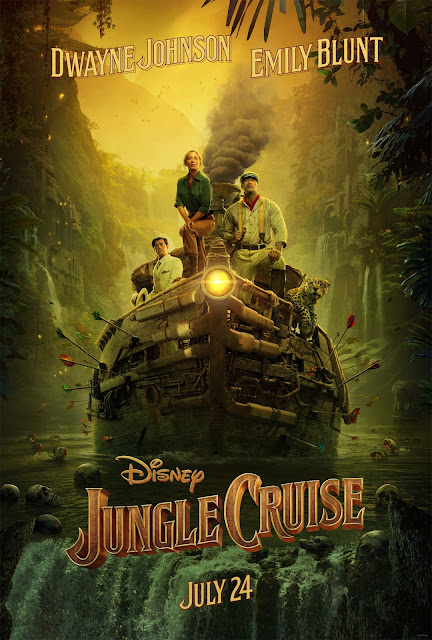 Watched:  11/15/2021
Format:  Disney+
Viewing:  First
Decade:  2020's
Director:  Jaume Collett-Serra
This is part of why it's nice to have Disney+.
Before COVID, I think maybe I would have talked myself into paying to see Jungle Cruise (2021) in the theater.  I'm partial to Emily Blunt, I more or less like Dwayne Johnson.  The Disney park ride of The Jungle Cruise is a highlight of every trip I've ever had when I hit one of the Disney parks - it's wrapped up in nostalgia, certainly, but it's a fun thing to go do.
I was a little put off that the jungle cruise of the film was not in Africa, as that would mean no elephants, my childhood favorite part of the ride, but... you know.  It's fine.
The movie is exactly what I expected.  Had I paid to see it in the theater, I might have sighed a bit and said "it was I who set his expectations too high", but if I compare this to the third movie I would have picked up on a Blockbuster run where I was grabbing two intentionally and might as well grab a third while I'm here... it fit the bill.
As Jamie remarked when we paused the movie to do dishes, "they are very lucky the actors in this are charming as hell", because the movie itself is yet another Disney map quest.  We've seen this before.  I straight up believe this is in continuity with Pirates of Caribbean, anyway, but it's essentially parts of that grafted onto the 1990's version of The Mummy, plus some other mumbo jumbo, and you've got your movie.
We also get Jesse Plemmons just having the time of his life as a wacky German prince also chasing the MacGuffin Tree, and Veronica Falcón as the canny manager/ chieftan to a local tribe.  I was pleasantly surprised by the actual arc given to Jack Whitehall, playing Emily Blunt's city-fied and less adventurous brother.  We've seen this part a million times, but we rarely see the brother actually learn he may have also have some rough-and-ready heroism built in, once he dispenses with proper dinner attire.  He's also gay, which the movie handles in a modern approach, which suits the film and I think handles the beat gracefully.
The movie does make a lot out of taking place in 1916, and... provides very little context.  I am unsure if American adults know jack or shit about WWI and what was going on in 1916 (it wasn't great - this is just before America sent our troops over), let alone the kids who would be showing up for the movie.  It DID make me wonder if people were still taking holidays to South America during this period.  Brazil was semi-stable, especially around the Amazon.  I have absolutely no idea.  But the movie does hinge on some knowledge of Britain's less than ideal situation as the war carried on.
There's also much to be made about gender in 1916 that you may need to explain to your kids, about why Emily Blunt is put out at the film's beginning and why she's employed her brother to stand in for her.  Or even what is happening with the cartographer's society keeping her at bay, but it tracks to the era.  And, of course, she wears pants, which much is made of, so get ready to do some googling as to when women started actually wearing pants as a matter of course (some pants during WWI and II, and then really in the late 1960's).
Anyway, the movie is mostly silly, with some PG-13 scares and swearing.  And, honestly, Marvel levels of violence (like, say, Ant-Man), which surprised me a bit.  But it is all definitely aimed at family type situations.  There's a lot of rube-goldberg-type chase/ fight scenes and much, much swinging on ropes.
I can't say how your kids will take the movie:  all I hear anymore is that kids are bored by anything that isn't a YouTube or a tiktok or whatever, but as far as what I think I would have enjoyed as a kid, it fits the bill.  For what I'd enjoy now - I'm not mad at the movie.  It's big and expensive, occasionally pretty, sometimes gross.  But the dad-joke humor landed incredibly well with me.  And I liked the leopard.
And I can't not comment that Dwayne Johnson is dressed like Bogart in The African Queen, but this isn't in Africa and... and...  anyway.
Posted by The League at 11/15/2021 11:20:00 PM

In my household the movie hit the mark for its target demographic, as the 10-yo loved it. My teenager shrugged indifferently as she walked back to her cave. Of course, she was on her phone throughout the movie so I'm not sure how much she actually viewed.

I think you can expect the teen to continue on with this behavior for sometime no matter what's on the screen. Glad to hear the younger one liked it - I think that's the age where I would have dug it.