Forgot to Mention it Watch: Crazy For Christmas (2005) 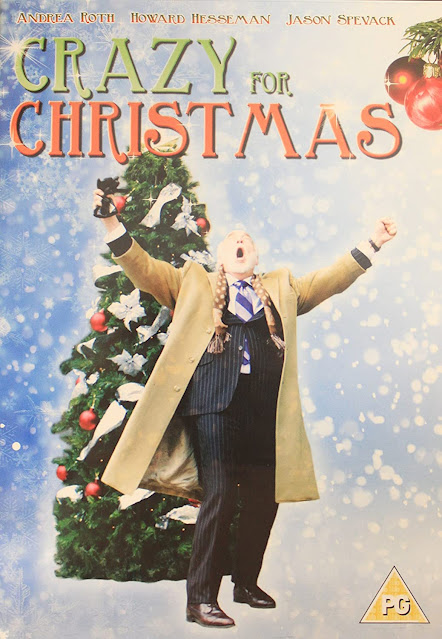 Watched:  12/17/2021
Format:  Amazon
Viewing:  Second
Decade:  2000's
Director:  Eleanore Lindo
For me, this film is ground zero for what has become what I oversimplify and refer to as my Hallmark Christmas Movie fascination.  I'm not sure I even watched Crazy for Christmas (2005) on Hallmark the first time.  It could have been Lifetime or some other network.  But I think I watched it Christmas 2005 when it first aired.  I know I watched it in Phoenix, and by 2006, I was in Austin.
What I mostly remember was that it starred Howard Hesseman of WKRP in Cincinnati fame, which was how I wound up checking it out.  "Oh, yeah, that person" quickly became what brought me back to these movies as I checked in on the Tiffani Amber Theissens and others who were happy to pick up a check and turn in a performance in a movie that would get eyeballs and not embarrass anyone became a thing.
This movie co-stars Hesseman, but really hinges on Andrea Roth, who has an imbd page as long as your arm, as a single mom struggling to finish school and raise a kid.  She works as a limo driver to pay the bills.  On Christmas Eve, a local eccentric millionaire requests her, specifically, to drive him around for the day.  She has a kid and doesn't want to do it, but the money is too good.
The millionaire (Hesseman) begins performing charitable acts and it catches the attention of the local news affiliate who sends a somewhat jaded reporter down to check it out.
As a product of the early days of the TV Christmas movie phenomenon, the movie doesn't blink to include things like divorce, challenges to paternity, and other stuff from Lifetime movies, but all in the context of a heartwarming comedy.  It takes place in a city without decrying city life.
Andrea Roth isn't particularly Hallmarky as a heroine.  She's a bit frayed from her life, counting on it getting better, and you get the feeling maybe her character gets harassed a bit on the job.  She's in a defensive stance that Hallmark movies used to feature when they had lots of characters who were unmarried but had kids (often, we didn't know if they were divorced or widowed), but it feels more grounded.
Anyway, it's a fine movie about reconciliation, ancient mistakes and maybe finding a new path.  Plus, money being neat to have.  I like Andrea Roth here, but she's mostly been in things I haven't watched, minus the short-lived Cloak and Dagger TV show (she plays Tandy's mom who is too-fun).  And Hesseman understands the assignment.  He's better than he needs to be, or at least what you'd come to expect from these movies in short order.
It's not great.  But I can see how I wound up watching it as it does have something your average Hallmark movie lacks - a sense of urgency about what comes next.  And it is decidedly not a rom-com, which is a huge departure.
Posted by The League at 12/27/2021 01:38:00 PM