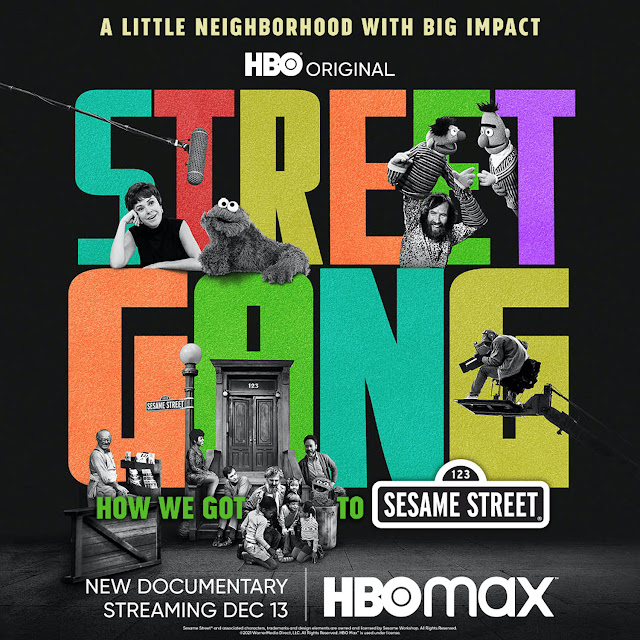 Watched:  12/29/2021
Format:  HBOmax
Viewing:  First
Decade:  2020's
Director:  Marilyn Agrelo
Of the near universal experiences of my generation (that being the generation known as "X") was the certainty that you were plopped down in front of a television as soon as you could sit upright and you were a fan of Sesame Street.  It was partially a product of the fact we usually had three networks and a PBS affiliate on our TV's and very little else, but also because it was recognized by our parents as both entertainment and a source of education.
As a kid, I remember the combination of Muppets, kind adults and kids, animation and music made it a variety show that I personally wanted to watch.  I am sure I had favorite bits and characters, but that's all been lost to time as all I can remember is a general warm spot for the show, the actors and the Muppets.  And, now, the nostalgia when seeing footage from that era hits me like a wave.  It's tapping into brain cells that haven't been accessed much in years, and related feelings both directly and indirectly tied to the show.
The documentary Street Gang: How We Got to Sesame Street (2020) is a necessary review of how the show came into being and the extraordinary people and their work who brought us the program   I can't stress enough how important I think this doc is for demonstrating how lucky we were to ever have Sesame Street, and what it is to have a program made with a love for kids and learning as the cornerstone of the show.  More than that - because there have been educational shows before and since - what it means to have professional educators working scientifically with artists to create something so impactful because it's lovely and entertaining while also showing kids a world they don't see every day if they're a suburban kid like myself (first in Michigan and then Texas in the Sesame Street years).
The goal of trying to help, initially and specifically, minority inner-city kids whose families may have to leave them with the TV as a babysitter is not entirely a surprise from my memory of the show, which featured kids of a variety of ethnicities and races living mainly in inner-city New York.  Coming off the anglo-centric view of the world that mass media tended to promote at the time, a cast of Black, Latino and White actors, kids of every ethnicity that showed up for casting calls, and a set meant to reflect stoops of dense city housing showed kids a world designed for inclusion.
It's hard to explain how revolutionary such an action was - but hearing from the people there at the time, and the passion they had for the idea - and that the Federal Government understood and funded the effort to the tune of millions of dollars is extraordinary.  And we are luck to hear from so many people who haven't been in the spotlight - or their children, finally getting a chance to explain what their parents brought to tens of millions of kids.
The doc could easily have been a series, covering all of the nooks and crannies of how Sesame Street's characters came to be, history of favorite segments, and this isn't that.  But it does give you an idea of who some of the extraordinary people behind the show are and were.
I finally get what the Children's Television Workshop was and is.  The doc never downplays what Frank Oz and Jim Henson brought to Sesame Street, but its the first time I've received a clear picture of what their role actually was.  Who the mastermind was who brought the pieces together (a woman, Joan Ganz Cooney, navigating the all-male bureaucracies).  Who Jon Stone was as director, producer and showrunner to the extraordinary program - and how weird it was that Stone somehow never quite received credit for his achievements when he was alive.  And the tremendous work of music director Joe Raposo - who is responsible for so many songs - and what he saw as his role on the show.  And never forget that Sesame Street is hysterical.  It literally contains some of my favorite comedy bits to this day (Grover as waiter is endless gold).  So you had to have writers who could do that AND sell an idea to a 3 year old.
Anyway, do check it out.  You might be like me and find yourself deeply choked up through the last 40 minutes or so.  Or even earlier just remembering a time and place you may not have been in touch with for years.  But what I find to be the true magic is the great fortune of the right people in the right place all together making something that is now in its 55th season and going strong, and still reaching kids out there.
Posted by The League at 12/30/2021 12:08:00 PM