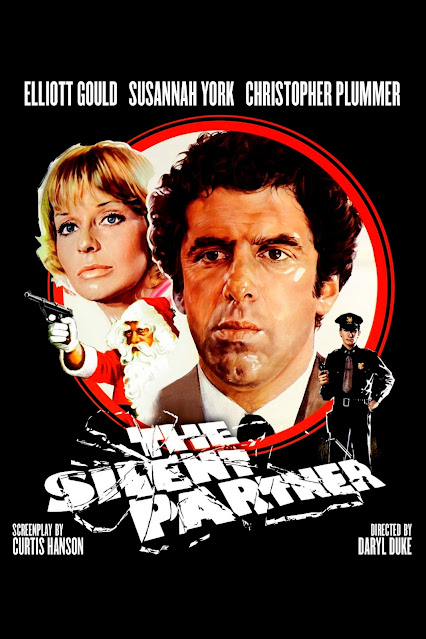 Watched:  12/30/2021
Format:  TCM on Demand
Viewing:  First
Decade:  1970's
Director:  Daryl Duke/ Curtis Hanson
I knew nothing about this movie other than it starred Elliot Gould before Jamie put it on.  She'd read about it somewhere and knew "this will be in Ryan's wheelhouse, so I don't need to sell him on it", and she was 100% correct.
The upshot is that I really dug this movie, and I think you might, too.  It's a very 1970's neo-noir in the vein of classic thriller-noir like Kiss of Death.  But don't use that as an exact comparison.
LIGHT SPOILERS
The Silent Partner (1978) does star Elliot Gould as a sort of nebbish bank teller who begins putting together through some sharp observation that his bank, inside a Toronto-area mall, is about to get knocked over.  Knowing this is true, he takes steps to rob the robbers right in front of them but in a way they won't discover until its too late - basically pre-stealing a large cash deposit he knows they're tracking as part of their plan.
What he doesn't count on is that the robber, played by a phenomenal Christopher Plummer just absolutely perfect as a textbook psychopath, believes he's been robbed and want to claim *his* money and get back at any weasels who stole from him.
The cast also includes Suzannah York as a very 70's "finding myself" fantasy female and a baby John Candy as a fellow member of the staff.
The movie works for a few reasons, not least is Gould himself, but the script comes from a book that clearly understood how to keep raising stakes.  Even when you think maybe our protagonist's life is in jeopardy at the outset, it just keeps getting worse, and he's driven to more extreme steps in a way that a lot of movies simply don't go lest their lead seem unsympathetic.  But, Gould's character is also more or less smarter than everyone around him, so it's a chess match of Gould versus Plummer, certainly.  And Gould versus the mechanisms of the bank.
I don't know that Gould is an anti-hero, but he does exist in a morally gray space, pitching toward the darker side.  A lot of what a modern movie would want to clean up as extraneous in this film really does color the situation, from his relationship with Suzannah York, her relationship with their boss, John Candy's affair with a co-worker and her affair with a different co-worker.  It may not directly comment on why Gould would pull the trick, but it does paint a picture of how he's aware he could be doing better and it never seems to work out (and he has obligations to a catatonic father), as well as seeing how other people get played for patsies and suckers and not wanting to be that.  Including getting taken by the bank's self-importance while also being where sex-capades are occurring, and the manager himself seems to use the bank as a place to find short-term alternatives to Mrs. Bank Manager.
That the film starts in the holiday season is both a practical plot consideration and a hint at how the sentiment of the holidays is just this side of where we can end up.
And, man, as a 70's film - it may appeal to a younger audience, but it's nice to see adults basically behaving as adults in a movie.  Even if its a neo-noir-thriller.  And it is definitely a lot goofier in its way than, say, The Friends of Eddie Coyle, but not everything needs to be a grim reminder of the spoils of a life of crime.
Anyhow - as good as Gould might be here, show up for Christopher Plummer.  He is done with your Sound of Music fan bullshit.
Posted by The League at 12/31/2021 01:57:00 PM