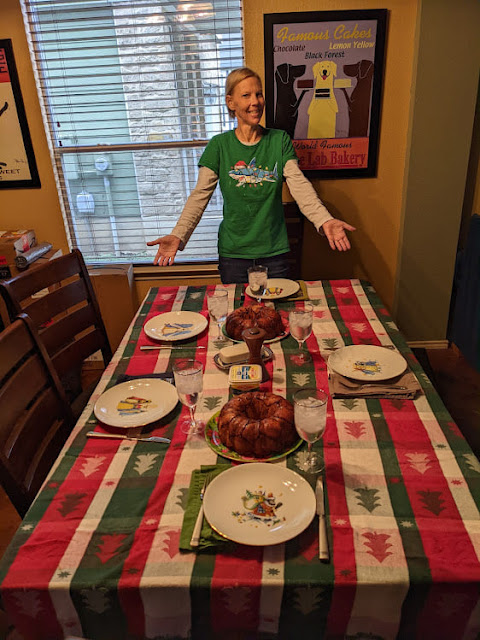 Hi all!
I hope your Christmas went well.
We had a good few days of festivities.  Thursday was Santa With Muscles Day, which... really, should never be repeated.
After much COVID testing, we were able to host Christmas Eve for my parents and cousin, Jamie's Dad and brother (The Dug) and his wife, K.  Unfortunately we were in a gray area with my brother's family until Christmas Day, so we missed them on Christmas Eve.
Cocktails, too much food, some jolly music and cheer was had by all.  It's also my cousin's birthday, so it's always a one-two punch of festivities on Christmas Eve.  As always, after parents left, we checked in with The Pope, watched some Hallmark, watched some Christmas specials, etc... it was lovely.
Christmas Day was super chill.
Jamie and The Dug made Cinnamon Roll Wreath 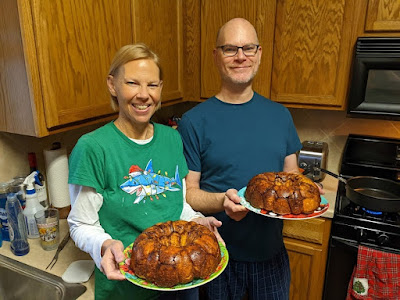 Also, eggs and bacon.  And copious amounts of coffee.
I received a lovely bunch of stuff that 13 year-old-me would be horrified at getting, but 46-year-old-me is like "recipes and spices?  HECK, YEAH!"  So, you know, we grow.  We change.
In the afternoon we headed to my folks' house in North Austin where everyone converged for dinner and some more gift exchanges (a SHIRT!  Yeah!).
Somehow I got roped into telling Tales of the Mysterious to my 6-year-old nephew, and was tapping my brain cells for every cryptid, ghost story, and other X-File I could muster from when that sort of thing took up a lot of my reading around, say, 1985.  It also became apparent that my nephew thinks King Kong might be real, so I didn't tell him he isn't.
After all that we returned home and watched... Hausu?  So.  You know.  Christmas.
I've said it before and I'll say it again:  low-key your Christmas.  Make it as small as possible, if you can buy food elsewhere and not make it yourself - phenomenal.  If you can chill out and not run around, do it.
We've had a lot of rough holidays, as do most people once you pass a certain age.  Appreciate the people, the time together and the food.  Everything else that feels mandatory is not.
This afternoon, Dug and K flew back to Berkeley and we started setting up house because...
The big Christmas gift this year was that we have been working to adopt a dog through a local rescue.
I'm going to save commentary on Day 1 with Andre for another day, where the name came from, etc...  but this is a picture of us picking up our fella from the foster home.
No, he has no idea who we are here yet in this picture.  We've spent the evening figuring it all out.
Posted by The League at 12/26/2021 10:13:00 PM