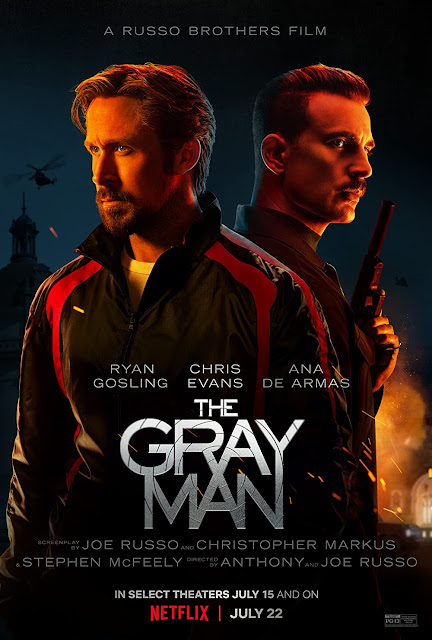 Watched:  07/23/2022
Format:  Netflix
Viewing:  First
Director:  Russo Bros.
So, I have not watched the Fast and the Furious movies, but I think this is that, set for my particular tastes.  Gimme some good CIA/ espionage/ assassination storylines, and some insane action and I'm pretty good.  It also doesn't hurt that I am onboard with Ryan Gosling, Chris Evans and Ana de Armas.  All people I enjoy watching do their thing.
I've seen some internet pouting about the movie, and to that, I say, "well, I watched this while putting down two Manhattans and it seemed amazing to me."  Like, look, I am not going to say this movie needs an Oscar for best picture, but it turned espionage movies up to 11, had some of the most complex and insane action sequences I've seen - in fact, echoing specific action sequences I thought were quite bad - and made them pretty great.  I could actually *follow* what was going on.  And I might have mentioned I'd had two Manhattans.*
I've seen some complaining about the acting, to which I say:  wat?
Like, literally, these people are doing exactly what they do in everything.  And/ or they didn't do something you wanted them to do so you're quite cross.  I'm not saying these are stellar performances, but everyone kind of does their thing.  Seeming vaguely detached is what Gosling do.  Spunky enthusiasm for whatever he's up to is what Evans do.  And de Armas is more or less exactly as she was in No Time to Die minus the slinky dress and given way, way more to do.
I don't spend a ton of time thinking about Billy Bob Thornton, because I don't have to.  He's just rock solid in everything, and this is no exception.  So, yeah, I dunno.
If you're looking for a movie that has plenty of explosions and fist fights and knife fights and bad guys you won't mind seeing die badly, and - frankly - completely batshit action sequences that carry you along like a tidal wave - it's a fun flick.  I liked the heightened reality of the whole thing in a way I can't get into with stuff like Kingsman that feels like "oh, aren't we being naughty!".
Anyway, I do plan to watch it again minus booze.  But I don't think I really missed much.  It's sorta nice to watch a spy movie that doesn't require a flowchart to follow.
*my Manhattan recipe is
lightly stir in a mixing glass and pour into a martini glass.  Sip to ensure it's good.  It is.  Nod.
Posted by The League at 7/25/2022 10:33:00 AM