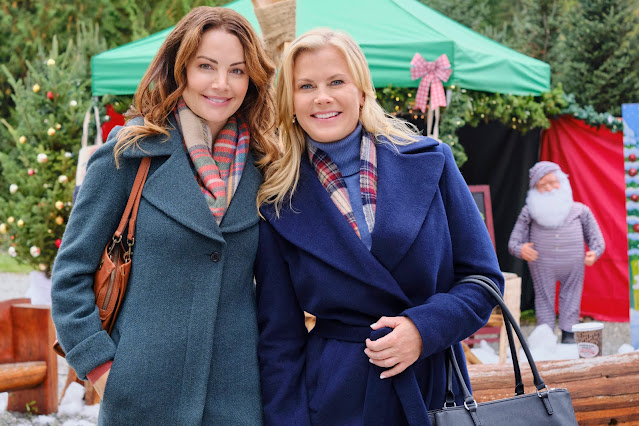 Watched:  I dunno.  Let's call it 07/10/2022
Format:  Hallmark's Christmas in July
Viewing:  First
Director:  David Weaver
I watched this for two reasons:  (1) I put it on for two seconds and then it ended and I'd just watched a whole movie and that's how Hallmark movies get you.  (2) Erica Durance was in it, which was the fuel in the fire, I guess.
Judging this movie by the current standard of Hallmark Christmas movies, it was... fine?  Good?  Let's settle on "it was okay at doing what it set out to do", which is all you can judge it on, anyway.
Not long ago, Hallmark started letting themselves make movies that weren't one of five plots, so now you kinda don't know what you're going to get.  I mean, the same bland, friction-free spirit is there.  You know everything will be okay.  But these days they've learned that's the thing, not any particular formula of story.  Thinking about it, the Vandervoort starring Hallmark pic I watched last Christmas also had two narrative threads, so maybe that's the thing?  Cast Smallville actors and two plots.  I'm calling it now.
This movie essentially has two parallel storylines about two besties now in their 40's, as one returns from the big city to her small town of origin (Allison Sweeney) to find out her parents are planning to downsize and sell her childhood home and her pal who is getting remarried (Erica Durance) and who is sorting out the fact that her husband-to-be is a good guy and good dad and her son is growing up.  Like I say, this is not exactly heavy drama.
Sweeney's story is kinda goofy as she tries to figure out who gave her a Christmas card in high school that was an anonymous confession of love, and the other is about a mom freaking out that her son kinda wants to not sit on Santa's lap anymore now that he's 15, but doesn't know her beau is buying her her literal dreamhouse and that's why he's acting cagey.  So, like, the minimal amount of "conflict" humanly possible, but everyone has an arc.
The weird thing is that it isn't particularly Christmassy.  It could have been during any season - buying and selling houses is not a Christmas activity.  They only marginally leaned on teh wisdom of old people, and Christmas memories were actually a sore subject here as Durance's character is trying to retrench the ones she's got and her son is putting up the mildest of resistance and is frankly helping his new dad plan an all-new very good memory.
Anyway - my only outstanding questions at the end were:  so... if Sweeney falls for the realtor and she doesn't live there and that's his region...  what now?  And, why was Durance's shop called "Best Buds?" and why wasn't she working all the time if it's Christmas?  Why was she screwing around at the Christmas market?
I guess I had a lot of questions.
Like what the title means in relation to this movie.
Yeah, maybe I had no idea what was going on.
Posted by The League at 7/25/2022 10:40:00 PM