The Power of Muscle Mystery!

I haven't read this series since 1996.  Color me excited. 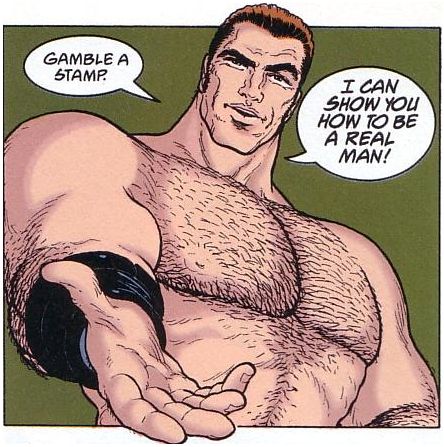 Vertigo, DC's comic line aimed at not-kids, kept me in comics during the crucial period of high school and college when I might have walked away from the medium.  Shade, Sandman, Swamp Thing, Hellblazer, Kid Eternity, Sandman Mystery Theatre (an undervalued and terrific book)...  I didn't get into Animal Man or Morrison's Doom Patrol until far, far later.  But I got to know Grant Morrison via The Invisibles,but his JLA and my growing interest in Superman brought me back to the DCU (with no small help from Waid and Ross's Kingdom Come).  Flex was a part of that, but its been forever since I read this series.

Mentallo first appeared in Doom Patrol before the mini-series hit.  Mentallo is loosely based upon the old ads for Charles Atlas, with a huge helping of Morrison.  The series is most famous now for the law-suit tossed at DC by the Charles Atlas Corporation.