It's that time of year again, boys and ghouls!

Time to start thinking about what you might wear for a Halloween costume. As always, I shall be dressed as Superman whilst dispensing candy (and comics!) to the local kiddies.  Should a party erupt, we'll have to see what I do.

Last year on this blog we took a look at some surprising additions to what costume makers thought would make great "sexy" Halloween costumes. This year, we weren't quite as shocked. After Sexy SpongeBob, nothing can phase us.

All pics were lifted from BuyCostumes.com, a place where I've bought some great items for Halloween such as my Superman boots and what was once my Superman costume (I only use the cape and belt anymore).

Wonder Woman is a staple of sexy Halloween costumes.  No doubt, the beauty of Aphrodite, wisdom of Athena and drinking prowess of Robert Mitchum is what every young trick-or-treater is thinking of when donning their Halloween garb.

I think this one is not actually a "costume" that I think is intended to be worn at home so much as a convenient way for folks with creative homelives to spice things up a bit.  Or a way to make things fun at Los Chicas Bonitas come October 31.  But it is kind of cute.  I like the skirt.  But I don't think Diana could fight much crime in those heels. 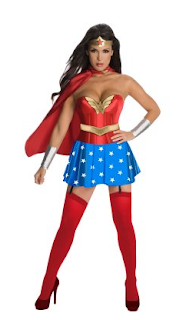 Ame-Comi:
Wow, this is hard to explain.

DC has a line of statues that I will likely never own called "Ane-Comi", where they hire our friends from the Land of the Rising Sun to re-design DC heroines in anime style.  The likelihood that anyone is going to recognize this look is 1 in 1,000,000.  But, of course, there's always dudes like me.

I kind of like this, actually.  Its somehow less pervy on a human than a statue.  Well, its still kind of kinky, but at least it looks sort of bad-ass and crazy for those CosPlay kids. 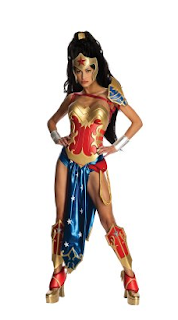 But good luck wearing that around and not breaking an ankle.

I strongly suspect that one is an entry for people looking for a cheap barrier into Convention CosPlay.  As was the thinking on the one below.

The doomed Jim Lee redesign of Wonder Woman for JMS's run on Wonder Woman.  Yeah, they made a Halloween costume for that. 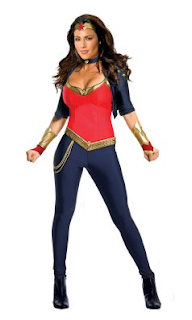 Probably the most interesting part about this is that it demonstrates what was wrong with Lee's costume design to begin with.  It really DOES look like someone escaped from an early 90's-straight-to-VHS actioner.

Also..  that head is totally photoshopped in there.  Weird.

Well, this one is just a given, I guess. 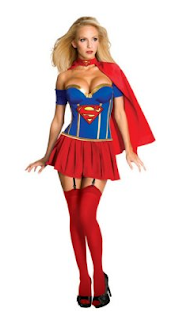 Its Thor!  Or a waitress from The Kettle with a cape and a big meat tenderizer!  I'm not sure!

Actually, this is kind of okay, and will be more recognizable than the Sif costume they were peddling. 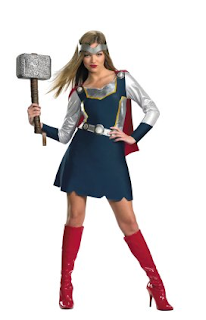 "What are you supposed to be?  Some kind of lizard?  Green what?  No, I never saw that movie.  Was he a lizard?  Also, so, Green Lantern was some sort of naked lizard guy then?  No?  So why are you in a green body stocking?  No, I think I know what a superhero outfit looks like, Ms. Lizard." 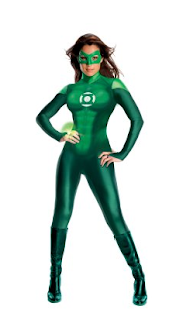 Not a Harley Quinn costume:

I guess its hard to trademark a Harlequinn look, and so we get this "Harlequin" costume that just happens to match the look of Batman bad-girl Harley Quinn.  Its's actually pretty good.  I guess your jester's hat or dyed hair is up to you. 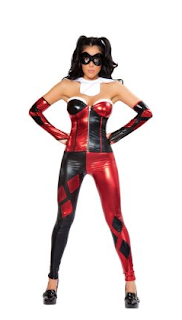 Costumes I will be surprised if people buy:

I didn't check to see if this was officially licensed as the story is Hans Christian Andersen, but its kind of goofy, nonethless.

Well, this must be licensed, what with the cartoon head there.  But I find this a bit baffling.

Despite comedy's insistence on naming bimbos "Bambi", the cartoon Bambi is a dude.  By the end of the movie, he's a rugged dude with a magnificent rack.  Sort of like our friend in the image below.* 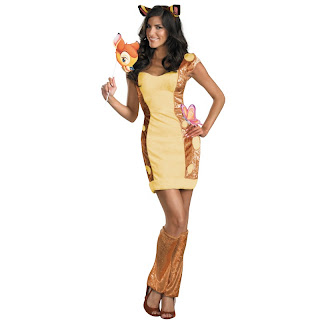 But, you know, gender-bending for sexiness is now a Halloween tradition as we'll see in some images further down.

For least sexy characters on TV, Rosie, the robot maid on The Jetsons, is pretty near the top of the list.    Rosie would go on to inspire the 2611 best selling novel The Help (or: 01110011 00101011100), and is built like a frigidair and had the charming voice of Fran Drescher's uncouth cousin.**  Maybe not your first choice in "sexy" unless your other option was "sexy toaster".

Nonetheless, it is a "property" and thus must be exploited as a "sexy" costume.

Duff-Woman
Okay, if you couldn't find this funny, your heart has shriveled and died. 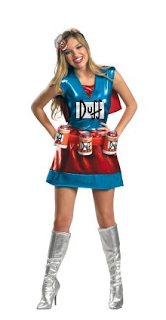 Latter-era Elvis:
I like Elvis.  I really do.  He wins every time for me in the Beatles/ Elvis debate.  I like later-career Elvis when he got experimental and Vegas-sy.

I don't know about re-incarnating him quite like this, but its pretty good. 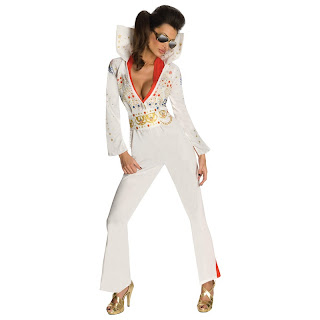 As Jamie pointed out:  "$50!  That's a $6 sweatshirt."  But what the hell, someone is marking that bad-boy up and printed "Flashdance" on it, almost like how my Spider-Man costume as a kid said "Spider-Man" on the chest, like the crooks needed an explanation. 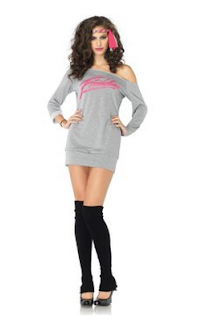 These are for Randy, and, frankly, I can't decide which I prefer.  Both have their merit. 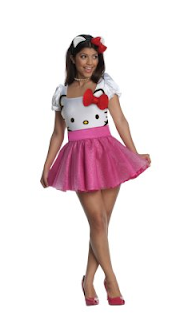 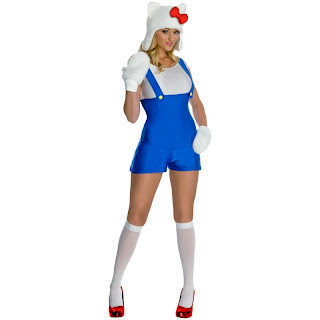 If you've followed this blog for any length of time, you know the affection I bear for A Christmas Story.  And so why wouldn't I find this the best costume of the year?  This totally appeals to me in its "my, that's a long way to go for a joke" reach.  And, no, most people won't know what you are while they're facing you. 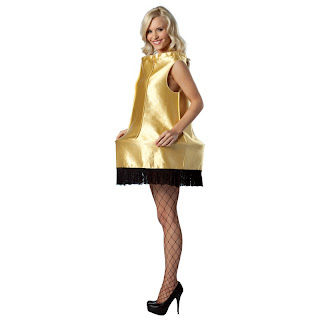 That's just terrific.  Let us hope you are not too frah-gee-leh for those heels.

I get the notion of wanting to dress up as cute Bambi or other characters.  But I find the following to be...  a bit strange as far as offerings go.  Especially as they seem to only distantly reflect the source material.

RoboCop:
My friends, I have no explanation.  But if I could get Jamie to buy and wear this on Halloween, I would. 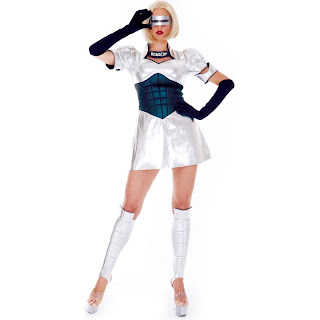 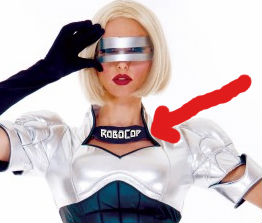 You know, of Halloween fame?  You know, but kind of sexy?
This one I find particularly baffling.  No mask.  Cleavage.  Not even a menacing look.  Really, she looks like a refugee from the world's slinkiest pit-crew.

If this is a hot seller, I'd say the fear factor has all but gone out of Kubrick's masterpiece, A Clockwork Orange.

It's a weird one, and almost hard to spot without the tell-tale athletic cup.  Instead, its a bit "community theatre presents Cabaret".

For those stray thoughts you keep having about Johnny Depp.

Silence of the Lambs:
Hannibal Lecter wore orange, and Clarice wore a big, heavy winter coat.  I guess this is a straight jacket.  Or something.

I guess its better than being the girl stuck in the bottom of the well.

Not necessarily for ladies:

I don't know why, but this costume made me laugh.  I hope we see Randy running around in this come Halloween.  O rmaybe just as everyday wear. 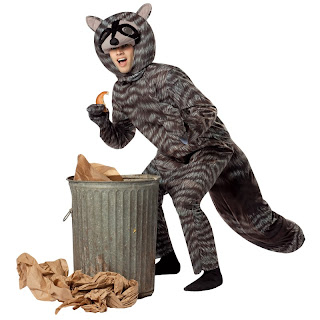 The costume you don't want to be wearing when they take your mug shot:

Yeah, I think just putting this on justifies "probable cause". 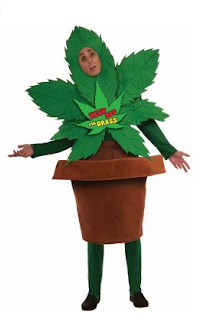 So, the Halloween season is almost upon us!  Time to pick your costume and get ready for the tricks'or'treats!

It does beg the question, how come there hasn't been a straight to video RoboCop sequel "Bride of Robocop"?

Just wait. They keep talking about relaunching the franchise. I'll be shocked if RoboCop isn't played by Charlize Theron to begin with.