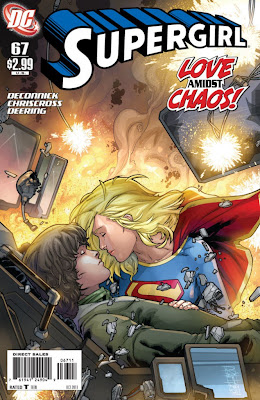 I skipped reviewing issue 66 of this run as its a three issue storyline, and there wasn't much new to add for the second part, not until we'd seen the ending of what DeConnick and Co. decided they'd like to do with this story to wrap up this run on Supergirl. I doubt, of course, DeConnick was exactly aware that this was the final story this version of Supergirl would see before next month's reboot, and so its not much of a farewell to Kara Zor-El. Its just another chapter in the life of Superman's cousin, struggling to find her place in the universe.


Frankly, I wasn't enamored with DeConnick's first chapter, and I'm not sure the next two chapters did much more to sway me.  While its clear DeConnick is enthusiastic to have the opportunity, its also clear she's one of a few dozen writers who've taken an "S" assignment but wasn't the sort of fan who could actually write that we saw in Roberson, or the writer who powered through with his understanding of the character, like Cornell.  Instead, we get a fairly generic superhero story that relies not so much on Supergirl as a focus, but "insert any superhero and supervillain, spice to taste" sort of story I don't normally slow down for, and I'm not particularly pleased I spent $9 to read over three issues.

Yes, there's enough there to show DeConnick did her homework, or at least skimmed Wikipedia.  It just...  it never really feels like anything particularly noteworthy, and after a year of fill-ins on this title, that's sort of disappointing.

I should make it clear: this is not a bad comic, it just didn't really meet my tastes.  And that may be perfectly okay, because I wouldn't mind walking away from Supergirl as a title or character if I thought 40,000 young women (the intended audience, I'd guess) were to replace me and keep Kara Zor-El going.  DeConnick plays off things currently circulating the internets, with her robot monkeys and alt-hipster neo-maxie-zoom-dweebies as heroes, while fully realizing "this is not a permanent supporting cast".

But the plot, ultimately, just doesn't really gel.  I wasn't very clear of Professor Ivo's plan that couldn't have been done by offering undergrads free pizza.  Why the tanks?  Were they killing people?  If so, why?  What was this "seed bank of human intellect"?  It doesn't work like Kirby's "just roll with it" approach to sci-fi concepts or Morrison's "Mad Ideas" because... it doesn't really go anywhere.  The threat just doesn't come together, and it certainly seems odd you'd do all this in the basement of the campus you're stealing kids from...

I'm a little over the "look how eclectic we are society" from the first issue, and the fascination with a character such as Henry Flyte is one of those clues that this was not written for me.  This I can accept, and accept it I choose to.  It makes me want to explain to freshmen entering college what a disappointment these fellows almost always turn out to be, but that seems outside the scope of a comics review.

Mostly, I was baffled by the final scene in which Linda Lang exposes her secret identity, thus endangering the entire Superman extended cast of characters, and its treated like a sweet little moment in the comic.  I guess Moss and Idleson just didn't really have reason to care at that point.

And this is the final image of Supergirl we'll see from this reality - a sort of crazed looking girl totally blowing her secret ID as she flies this Henry Flyte tool into the air to capture that "magical" feeling.

The Lois Lane appearance really goes nowhere, which is odd after DeConnick spent pages and energy working her into the story.  It seems she's mostly there to give a random character a much-needed ego boost, but nothing seems to get resolved after she snoops for three issues.  I have to assume DeConnick knew she only had three issues at the outset, so that seems... odd.

In a lot of ways, this whole storyline gives the distinct impression that Idleson and Moss were just off doing other things, and this book was simply a placeholder until Septmeber, and maybe that's okay.  $9 I spent, but...  yeah.

Of the books I wanted to love, aside from Gates' run on Supergirl, DC gave us so little to grab hold onto, enough that I realize that a reboot is really a pretty good option for the character.  We've had opportunity to see what works and what doesn't, and I'm game for another go, so long as I see the words "Matrix" or "Mae" nowhere near this title.