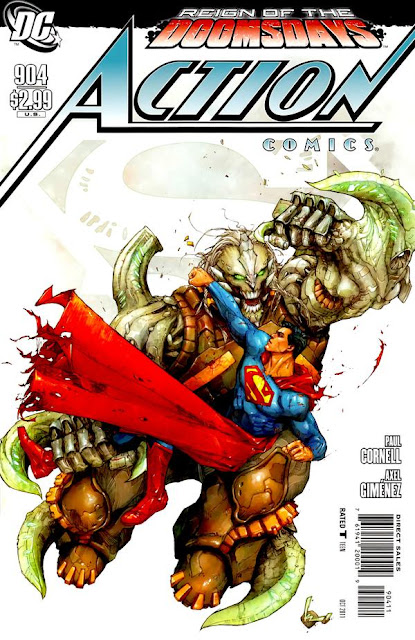 Let us bid farewell to Volume 1 of the longest running comic in America. Action Comics has been in print since the spring of 1938, and yesterday saw the final issue of the first volume of the comic which created Superman, and therefore, maybe, superheroes, into existence. As much as I understand the need for DC to have a massive new effort to bring readers to their comics, part of me wishes that the only convincing strategy was a break in the numbering on Action. Its like congress suddenly deciding we're going to still have Uncle Sam, but now he's got a mustache instead of the chin slinky. Its just not the same.


I should never read reviews before I write my own, but I happened to read one today, and having had read this comic last night, it at least gave me a bit of context.

This issue draws to a close the extremely odd reboot of Superman that began in 1986, and which was jettisoned as recently as 2006 to bring back some of the magic of the Silver Age to The Man of Steel (a decision I still think was the right one, but which the audience just wasn't primed for after years of folk tales about how "bad" Superman was prior to Byrne). And while Doomsday was never my favorite character or villain, it seems somehow fitting that the final battle of this era of Superman would take place between Superman and the creature who killed him (and led more than one person I know to believe that they quit making Superman comics in 1992), giving him the last great hurrah he had in the press and sold a couple ba-jillion comics.

Its hard to talk about the issue as a standalone as its the conclusion of so much. The last Doomsday story, the last Paul Cornell Superman comic, the last of this continuity for Superman, the last team-up between the Superman Family with characters I genuinely love in their own way, like Steel. And, of course, we get this frustrating look once again at what a great Lois Lane Cornell would have added to the Superman books if things had been... different.

Its also amazing how different Action Comics 1's Superman was from the one in this issue. We've gone from a man leaping from telephone wire to telephone wire, who is just freakish for picking up a car, whose flesh can be pierced by no less than an exploding shell - to... global superhero leader passing through dimensional vortices and saving the planet from a sci-fi doom at the hands of an intelligent, belligerent alien monster.

Yes, the final issue is a team-up book, but the dozens of faces don't do anything less than remind me that part of Superman has been the world of superheroes he's inspired in the world of the DCU and in every corner of our own planet. It seems fitting that in the final issue, led by his example the world's heroes group together to back-up the first superhero (and even Batman takes a back seat - and poor Wonder Woman is left out of the picture as we maintain continuity to the bitter end).

Cornell's Superman has been far, far too short lived. Yes, I enjoyed the living hell out of his Black Ring saga, but that should have been a standalone series if DC's editorial had understood anything about their own fanbase. He GETS Clark Kent/ Kal-El/ Superman in a way that I had honestly wondered if I'd see again circa 2005. But since then, we've been graced with Morrison's All Star Superman, Johns' rebuilding of the Bronze/ Silver Age and brilliant redefinition of the Legion and Brainiac, Busiek's strong contribution (I will never not think Subjekt 13 was a great idea), and most recently, Roberson and Cornell, who could have easily revived Superman through force of will rather than with the editorially mandated stunts of New Krypton.

Cornell's Superman is quick witted, smart, but humble to a fault - he can't see why he inspires the other heroes and worries as much or more about them taking the field than about putting himself into a cannon and firing himself at the weird, transdimensional craft about to explode the planet. He understands sacrifice from himself, but to such a degree that he can't understand why others would do the same when he's willing and able (but not as suicidal as I think I just made it sound). Its a lovely sentiment, and puts the nobility into the Superman.

All in all, I enjoyed virtually every issue of Cornell's run, and I'm sorry to see him go.  I don't have the energy to harp too much on editorial mandates, and other things I can't exactly confirm, but without having access to Superman for a year, Cornell still turned in an absolutely fascinating run on Action with Luthor, and I confess to not believing he could pull off Superman until he got his hands on the character and nailed it in almost every panel.

There's a sort of epilogue on pages 17-20, of Superman and Lois, loving and married, finally alone again together in Metropolis as just a married couple out to dinner, in a scene that I think a lot of other writers may have tried at and failed (I wasn't blown away by a similar scene post New Krypton).

I can't help but think of Clark Kent in Action Comics #1 awkwardly asking for a date from Lois and blowing it once Butch tried to cut in and Superman let the guise of meek and mild-mannered Clark lose out to the thug.  Now we have Lois, who knows Clark, Superman and Kal-El not so much giving him a pep talk, but maybe speaking for the fans.  As so many wirters have done in their final issues, Lois speaks maybe for Cornell, and maybe for me.

"People know who the real Superman is.  It's the decent guy with the silly smile, who's sometimes a little old fashioned, who lives a whole human life.  Who fell in love and got married."

And instructions for those who follow in Cornell's footsteps:

"Clark, coming from Krypton didn't make you Superman, Martha and Jonathan did.  And thanks to your doubts and fears and refusal to be above anyone, you do them proud every day".

Its a simple package there, and a collection of old saws that longtime fans should know.  But we'll have to wait and see if the core of what we've loved about Superman for 73 years survives into tomorrow.

We'll miss you, Action Comics.  But I have a feeling we haven't seen the last of either red trunks or this numbering system.

Seems like everyone is loving what Roberson and Cornell have been doing as this iteration of the DCU winds down.

There will likely be a "Farewell to the Old Earth 0" post, but yeah. DC's failure to have Roberson anywhere in the new DCU is a slight to both reader and Roberson, and the failure to see why what they were doing was a valid direction is part of why I have concerns about the Relaunch.

At the end of the day, part of their success was forehead slappingly simple: Superman should be a good guy superhero whose "inner turmoil" is in making the best decision for the most people (ie: heroism). And keeping him at the center of his own stories.

I think the relaunch will be fine, but I'll always wonder what Roberson and Cornell's "Superman is Metropolis" stories would have looked like. At least we'll get Superman back in his usual setting out of the relaunch.

I'm reminded of Alan Moore's Whatever Happened to the Man of Tomorrow story after reading your review. Not that Cornell's story is that similar but that celebration closing the page before the inevitable reboot.

I hope that the new DC captures all that is good with the title but I have the feeling that making Clark/Superman younger and more inexperienced now will make us tread through things we've all seen before.

Probably the biggest misconception about the post COIE-Byrne-era was that it was "all new". It wasn't. Sure, some of it was new (ie: Doomsday), but it was mostly writers getting on Superman who were fans of the pre-Crisis stuff and coming up with new reasons that it should exist, or finding incredibly convoluted ties back to Krypton. And all of them sort of assumed you were familiar with pre-Crisis Susperman.

I'm actually... sort of okay with the fact we'll see the re-tread. The Byrne-era retreads were a bit of a mess, and I never liked "confident Clark" so much as I liked "classic Clark". For a prime example of what I mean by the awkward retreads: 90's Supergirl.

Its not like the Silver Age stuff can't use a little spit and polish, and it does seem like we may see some of the fantastic sci-fi return to Superman with a modern slant.

I'm not SURE all these things will be true, but I can hope.