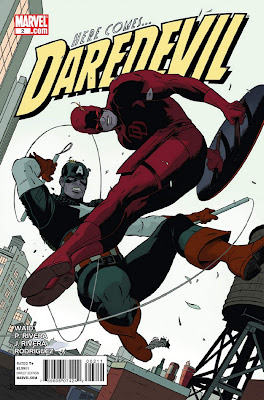 What? I'm looking at a MARVEL comic???? Everybody just breathe easy, and we'll get through this.


I bought issue 1 of this new run because: Mark Waid. I really like the guy's work, whether his epic stuff like Kingdom Come or his work on Cap back in the day. I confess... I've read so little of his Flash that I have nothing to say about it, but I'm hoping DC does some nice Omnibus editions one day.

This issue features 2 of my favorite Marvel characters right there on the cover, and so, while I WAS going to trade-wait on this series: Cap. And Daredevil. Written by Waid. Yes, these are good ways to squeeze some coins out of me.

After a decade of pretty grim and often soap-opera-esque dealings in Daredevil, almost all of which I read (and enjoyed), but quit when that whole last Foot-Clan thing happened, I was glad to pick up again and see Marvel is just dealing with continuity, and the whole "Daredevil's secret ID is a public secret" thing is turning out to be a bit of fun, I think.

Daredevil appears to be returning to his superheroic roots, and I don't see a "Max" label anywhere on the comic. Not that Marvel couldn't turn on a dime and it IS rated T+, but its still a Marvel book, and I'm glad that they see they can do Daredevil without swears or whatever.

Anyway, its only issue 2, but I'm already pleased, and I think we have enough attorneys reading this site that I thought I'd suggest my attorney friends pick this one up at some point and see what high court hi-jinks Murdock & Nelson are getting into now.

Its a good, breezy read, and I like where Waid is going.

On art, I'm very impressed with both Paolo and Joe Rivera, who manage to capture a sort of post-Lark look to Daredevil, keeping the everyday stuff detailed and natural while effortlessly working with the hiflying opening to the issue as Cap and Daredevil hop across rooftops. Nice work, and an interesting color palette from Rodriguez.

Sorry, after that Supergirl review, I needed to cleanse the palette a bit and write about something I liked quite a bit.
Posted by The League at 8/23/2011 11:49:00 PM

I totally agree. I was never a big Daredevil fan but this book is looking really good so far. Be sure to read Waid's Irredeemable and Incorruptible.

I am a big fan of Waid's Boom! work, and I pick it up in trades. I've felt like Waid has been on this great curve of just continuing to get better all the time (and he wasn't bad to start off with).

Stuff like Irredeemable shows his versatility, and it should be one of the more talked about superhero books out there.