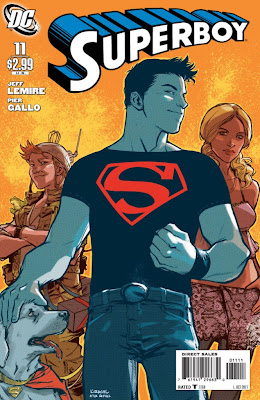 Between Supergirl and Superboy, in the reshuffling that's beginning here in September, I'm definitely more sorry to see Superboy go. When the character was first introduced back in Reign of the Supermen, he was sort of "everything that's wrong with comics" as I felt it at the time. I wasn't sure why I, as a teenager (roughly the age Kon was supposed to be emulating) was supposed to like a character who I felt was a bit of a dipstick, a portrayal that I'd never shake until Geoff Johns got his hands on him in Teen Titans and just dropped the previous decade's worth of portrayal.


Yes, he was the Poochie of superheroes.

In an era when I was saying "oh, what's the 'Kid Eternity' book by this mysterious Morrison fellow?" DC gave me a 45 year-old's stereotype of how their damn kids wouldn't pay attention to them, made him an idiot, and called him "Superboy".

I was a fan of Johns' work when Superboy was revived for Adventure Comics, and was quite thrilled with he earned his own title and ongoing under the capable pen of Jeff Lemire.  And then I became a bit distraught when Superboy began dealing with "magical" happenings around Smallville.  It just seemed... wrong.  A bit like how I had a very hard time wanting to get too invested in the 1990's version of Supergirl (possibly the best metaphor for why the Byrne-relaunch never really worked very well) with her celestial angel fire-wing nonsense and demons as supporting cast.

This issue simply does the job of wrapping up the storyline Lemire kicked off, and its easy to see the potential of the series in the final pages, had the uncertain promise of Lemire staying on been fulfilled.  A supporting cast was finding its footing, C-plots and emotional arcs were starting to find a home, and the whole magical set up felt like that and not a whole lot more by the end of the issue.  It wasn't that important that the threat was magical, it was important that the group came together and Lemire had a solid foundation from which to grow the series.

That, of course, wasn't the fate of the book.  Issue one of the new Superboy gives him an altered origin and keeps him at Cadmus (or wherever) a bit longer.  And I'm betting we don't get handed a dated look, complete with bad 90's haircut and straps/ belts.

Were this to roll into September, I would genuinely be a bit excited to see where Lemire were headed with his cast of characters, and the foreshadowing bits he's dropped along the way.  I suppose one day he'll tell someone what he had in mind, and I'll feel a bit robbed that I didn't get to read it myself, but that's the price we're all paying in the post Flashpoint world, I guess.

So long, Superboy.  For a long while, I thought you were a terrible character.  You showed me wrong, and you ended on a high note.