I don't read a tremendous number of science-fiction novels, and I never have.  I know what that looks like, and I appreciate the fandom, but its never been me.  Sure, I went through my Bradbury phase and I glanced off the Robot Novels of Asimov, but even in middle-school I'd pick up paperbacks, read the product description on the back, and only rarely walk out the door with one I felt was worth the while.

I also don't read book series.  Its not that I haven't read, say, books by William Kennedy that share a set of characters and circumstances, but its not episodic in quite the same nature.  When I think about a series of books that numbers more than four, I can't get my head around it.

As you may have heard, I've been enjoying the writing stylings of Chris Roberson for a bit now, so when I heard he had a book coming out, I pulled some strings (asked politely) and got a copy.*

I just finished Further: Beyond the Threshold, a book I assume is intended to start a new series. 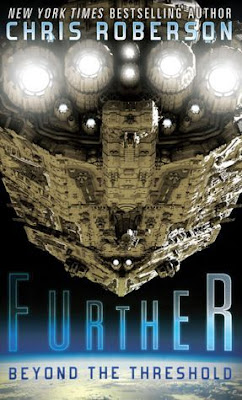 This is no-@#$%ing-around science fiction, and I quite enjoyed it.

Captain RJ Stone awakens from hypersleep which he entered aboard a star-faring vessel in the 23rd Century.  He finds himself alive and deeply aged 12,000 years later in a world which has changed over the millenia.  The era of seeking new planets has been conquered and mankind has spread itself out far over the cosmos.  With so much time passed, some of those civilizations have been lost, and the challenges of passing from one world to the next have been solved by way of instantaneous transportation via "thresholds".


The Stone of the 23rd century, who once soared between the planets, and who was part of a small crew that was lost in space en route to a habitable but unexplored planet, finds himself in a world of nearly magical technologies such as matter conversion, a redefinition of humanity which now includes all manner of intelligence and life (all sprung from the original Earth), and to find a bespoiled Earth has already been re-used for raw materials for a huge, inward facing sphere that innumerable variations of life call home.  Death is no longer one's only option, and one can forego old age with the right prescription.

His history intact and his status as a celebrity of almost mythic Earth legend earning him trust, Stone is quickly called into play and, given his history as a captain of vessels, he's given command of a starship the size of a small town, utilizing new technologies to travel further and faster.

It took me more than half the book to ping to the idea that exploration was the overriding theme of the book, and what will certainly be intended to be a series of novels.

What has struck me initially was that the book seemed structured a bit like a 2-hour pilot for an hour-long drama, setting up the world for the character in the first hour before getting serious about the actual conflicts in the second.  I don't think that I'm necessarily wrong, but once I realized this was less a gun-toting space marines actioner and, perhaps, far more of almost a vintage sea-faring adventure tale with a ragtag crew with their own agendas and motivations, the pieces fell into place, and all without any of the heavy-handed narration I associate with a lot of sci-fi.

A couple of things I've enjoyed about Roberson's work in places like iZombie is his sense of, and don't take this the wrong way, but "mature whimsy".  Anyone can put a tiara on a monkey and, hey, that's a good idea. But Roberson's characters are always distinct, imbued with certain elements that set them apart from one another that are character-driven, and not just a mish-mash of ideas generated to make him look clever.  And I say this about a book that features a primary character that's a chimpanzee doctor who is a bit of a bon vivant.  In short, it doesn't stop where so much of what I see the kids doing these days where they can't think beyond the initial concept - Roberson actually got me to buy talking robot birds, amazon space businesswomen, and a subculture of historical CosPlayers.

And all of that actually makes you care.

In his comics work, I've often found Roberson's references, both explicit and implicit, an interesting layer to what he's doing and saying.  And so while I occasionally raised an eyebrow to a 21st Century pop culture reference by the 2136 born RJ Stone (I'm assuming Roberson intended that the points of reference has survived a century or more), most times it felt welcome as an easter egg when I caught the reference, or as commentary upon culture through the lens of the far flung future.

I won't get too much into some of the ideas in the book, which Roberson tosses about like confetti.  But I do look forward to seeing where he plans to take the crew of the good ship Further.

To be honest, if we're talking about human technology and culture, trying to project 12,000 years in the future leaves me a bit... nihilistic.  So I deeply appreciate Roberson's beliefs regarding all the issues we'll have conquered, and the world that's yet to come, leaving even RJ Stone's world far ahead of our own world (but still terribly recognizable) looking a bit like a world full of cavemen.  And by leaping so far forward, Roberson is able to give the world endless opportunity and history.  Its fascinating, especially once we can understand how and why we're following RJ Stone as our narrator.

In short, I liked reading about a tremendously positive view of the possibilities for mankind's future, in much the same way I once enjoyed a certain James Tiberius Kirk and his pals cruising around in their space Camaro.