Signal Watch Watches: What to Expect When You're Expecting (2012)

Let's get some facts on the table. 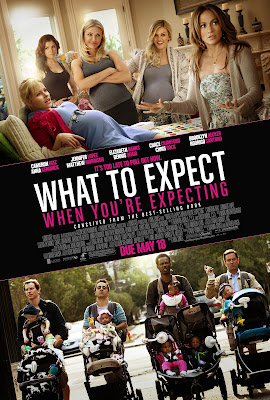 In general, this is not the sort of thing I'd normally consume as comedy (I DVR Eagleheart on Cartoon Network and still will watch things like Warrior of the Wasteland for a laugh), but I also generally don't rush to the theater for comedies, anyway.

Now, the crowd at this movie was particularly interesting as (a) I don't know what the make-up is of the new Slaughter Lane Alamo Drafthouse, but this was not the usual young genre freaks, and (b) oh my god, the number of pregnant women in the theater.

As someone without children, it was also interesting to hear the things the mass of the audience found hilarious (I assume in a "we've all been there") sort of way, and the things I found funny (small children "discovering" a dead animal in the woods and presenting it to Dad) which didn't get as much of a laugh.

This is absolutely the big, star-studded ensemble comedy it appears to be, following a half-dozen storylines with different bits of misadventure, tragedy and other ways of examining the same human experience from multiple angles.  I do think with so many stories in the movie, there's a little something for everybody.

Now, this is not a movie about kids and whether or not you love them (I find them best with ketchup).  This is a movie about pregnancy and/ or yearning for children, all things with which I have no experience.  I am told yearning for children is different from yearning for a pizza to arrive, but that's the closest thing I can imagine.  And, of course, the film covers all the things about pregnancy that friends and co-workers seem to find a complete surprise because, apparently, they did not get a minute-by-minute run-down of how things were going from their pregnant co-worker in the Academic Year 2002-2003.

Of course the movie is loosely based upon a handbook I have never read (and likely never will read).  So, yes, it is an adaptation of a non-fiction manual to a light studio comedy with a vast ensemble cast.  Its not intended to terrify, but act as a companion piece to the most common of human experiences, right after, I'd guess, high school.

The movie doesn't really pull punches, but it also isn't about slugging you in the gut.  The first scene of the movie sets the tone pretty darn well, with a star at the height of her powers hitting the wall of a less than glamorous view of what biology does to you, and how quickly it shatters constructs.  And that's really what the movie is about in a nutshell.  Whether we're talking the accidental pregnancy, the couple longing for children and having trouble conceiving, the supposed hero of mommydom...

From the trailers (and life experience with pals who are now dads), I guessed I'd find the "Dad's Group" the funniest part, what with Chris Rock and Thomas Lennon involved.  Indeed, that was true.  But I also quite liked the cross-generational pregnancies of the two Cooper-Family storylines, especially seeing Dennis Quaid in a scenery-chewing role as a champion NASCAR driver with his trophy wife.  Its the broader humor of the movie, but it also works, as does much of what Elizabeth Banks does as the woman who should have been the most-prepared mommy on the planet.

The only part of the movie that just didn't do much for me at all was the young food-truck-chefs storyline, which offered specific issues tied to pregnancy, but seemed like it needed about 20 more minutes of screentime the movie couldn't afford in order to really explore what they were trying to say.

Heck, even Jennifer Lopez was tolerable (you guys, I really, really do not like walking corporate brand J Lo) in the adoption plotline of the movie.

So, yeah.  I do think it had some pretty clever bits, and, heck, as many of my contemporaries are now ankle-deep in babies, why not?

When asked about the movie at dinner this evening by Matt & Nicole (also Child Free Americans), I put it this way:

I sort of felt like this was a movie about going to Spain, and I've never been to Spain, and in order to appreciate the movie, you had to not just have gone to Spain, but really liked your time getting there and the time once you arrived.  I can understand bits in the abstract, but I lacked some reference.

I have never been to Spain, and I have no plans on going, so...  there you go.