I'm not familiar with the work of writer/ director/ producer Samuel Fuller, but he has one of those names you always hear.  And, I haven't had opportunity yet to visit the Paramount yet this summer for the summer series, nor had I ever been in the State Theater on Congress, side by side with the Paramount.  Wednesday night provided a great opportunity to knock some items off my list, and so I caught both Shock Corridor (1963) and The Naked Kiss (1964), two movies that earned their bonafides.

Of the two films, Shock Corridor may have dated more poorly, even if it still holds up very well from a narrative standpoint.  It follows a newspaper journalist who knows he can earn a Pulitzer by going undercover into an mental hospital to solve a murder the police have been unable to crack as the only three witnesses were hopelessly mentally ill.  He recruits his stripper girlfriend, played by the lovely Constance Towers, into posing as his sister who files charges of attempted sexual assault.  With training from a psychologist, Johnny Barrett sneaks in undetected.

And then learns that a mental hospital run under the common practices of mid-20th Century medicine was no picnic.

As Barrett, Breck turns in a solid performance (and looks a bit like a missing Baldwin brother), slowly unravelling in the face of all-consuming madness.  Constance Towers (more on her later) is rock solid as the girlfriend who didn't want to go along with this in the first place.

Both movies by Fuller may have been edgy for New York stage work of the time, but as films seeking a mainstream audience in 1963, they must have been absolutely shocking.  Fuller's frank but nuanced approach to everything from gender roles to sexuality to race to mental illness to the treatment of mental illness...  its all there, and its not designed to give you a simple thrill.  Clearly he was pushing his audience then as much as the audience is pushed now.


He also has some great technique in the film, cutting in found footage, experimental editing, non-standard camera work...  he was really pushing the boundaries a good 5-10 years ahead of a lot of what else you can point to, even if the acting does feel very tied to the 1950's - turning what many must have thought would be a thrilling exploitation flick into something far more layered.

You will also never hear the phrase "nymphos...!" uttered to such effect as you will in this movie.  People finding samples for your 90's dance music, this is your scene.

But it was really The Naked Kiss that was my favorite of the two movies. 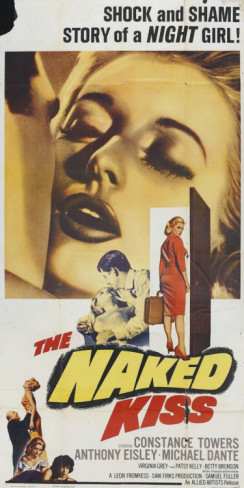 The plot plays out like a fairly standard noir for a while with some great dialog, a strong character arc for Kelly, and characters who are never really what they seem.  And then you hit the turning point to the third act, and it was such a surprise, I know my jaw literally dropped, and I may have actually said "Oh my God" out loud in the theater.

Anyway, its a hell of a movie.  Absolutely tough, horribly creepy in parts, but balanced with genuine sweetness.  Other, better, writers might talk a bit about the fight between innocence and depravity in the movie, and we could go there, I guess, but the film plays with small town innocence as portrayed in the movies as well as anything since Shadow of a Doubt.

And now I totally have a crush on an actress who is still alive.  That hasn't happened since Sophia Loren, I think.*


Anyway, I'm in on this Sam Fuller-worship business.  Two great movies back to back.  Unflinching, tough stuff, and done right.

Its probably worth mentioning that I wonder if the content scared off bigger name actors who weren't sure they wanted to play in the Shock Corridor sandbox, or if these were B-movies at the time and Fuller simply couldn't get bigger names.  But these aren't roles you'd see Doris Day exactly clamoring to take on.  They're small, cheaper movies, certainly, and in a way, maybe all the more powerful without the distraction of the top box office draws of 1963, able to do a bit more to challenge the audience.

I'm going to go ahead and class these as noir.  I think there's an argument to be made, especially in The Naked Kiss as Kelly pursues her dream, and with the off-kilter ending.  But they're both pretty late for classic noir, and start to drift more into the tougher filmmaking that would define the 70's, even if they don't have the flair of the modern film that pops up in Bonnie and Clyde.

Likely there's some great criticism written about these movies out there, but we'll not do that here.  We're mostly just jazzed about the joy of seeing two movies that fit neatly into our wheelhouse and that we'll start looking for opportunities to revisit.