Y'all, I finally watched A Shot in the Dark (1964)!  Please check one of those movies off the list that everybody else saw 20 years ago.

And, sure enough, it totally lived up to the hype.  I haven't ever seen that many Sellers movies or Blake
Edwards films, but, yeah, I get it.  Sorry it took me so long. 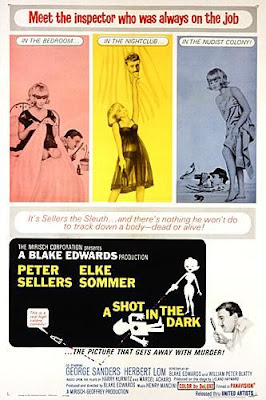 If you don't know what I'm talking about, before The Pink Panther, Blake Edwards directed a movie starring Peter Sellers as Inspector Clouseau.  A Shot in the Dark did well enough to spawn a sequel you may know as The Pink Panther.  This spawned not just several Pink Panther movies and a favorite movie theme by Henry Mancini, but a Pink Panther cartoon based upon the opening animation for the Clouseau movies (I watched the cartoon in repeats on WGN in middle school), a brand of pink insulation, and, eventually, a reboot of Clouseau under the Pink Panther banner, but with Steve Martin, which did better than you'd expect.

I won't go into too much detail, but its worth a watch some time.

You forgot that it also inspired a certain elementary school mascot, "Woody".