After a steady diet of terrible flicks over the past two decades, something I had somehow come to enjoy in my teen years, seeking out bad movies is something I'm now limiting in my intake as I realized a man can only watch R.O.T.O.R. so many times, and there's actually stuff you can enjoy because its actually worth watching.  But for a long, long time I felt like I was fairly well in tune with what we all considered the worst of the worst.

And yet, somehow, I'd missed the phenomenon of Troll 2.

Of course, I was also living in Phoenix when The Alamo figured out how to turn genre-film and midnight screening material into part of their bread and butter, getting people excited about movies that they had never seen, or getting them to pay good money to see movies they'd seen for a far more modest cost on late-night HBO a decade before.

The first time I ever heard the words "Troll 2" was, curiously, at an improv show performance where one of the actresses mistakenly believed that repeatedly making callbacks to a movie few people have not seen nor remember was comedic gold.  I swear she dropped the movie's name four times, hoping for a laugh.  She was greeted with stony silence, but the fact that she kept going back to the well made me realize "oh, this is one of those things today's hipster kids are into.  I get it.  But, seriously, naming something funny when you aren't doesn't draw a laugh.  STOP IT NOW.".

Best Worst Movie (2009) tracks the circa 2006 fad (I'll go ahead and call it that) of being really into Troll 2 from the perspective of the folks who participated in the creation of the movie, including the stars, writer, director, extras and, of course, some of the folks making midnight screenings happen. 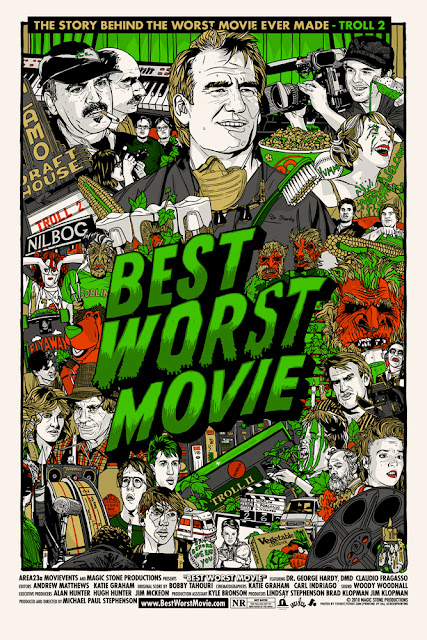 The film's former wanna-be child star, Michael Stephenson, actually does an amazing job directing the documentary, collecting all the folks from the film together, getting them to talk honestly both about the film, where they are now, and how they related to the film then and now.  A lot of the questions I had left over at the end of Rock-afire Explosion are nowhere to be found in this film.  I mean, sure, you can still have some questions, but those might be of a nature that you can sort out for yourself.  Basically, the film doesn't raise more questions than it answers, and its pretty honest about what's going on.

The story is propelled along by the film's co-star, George Hardy, a Class 6 Force Hurricane personality with a certain level of charisma, an awkwardly boisterousness, and a certain self-deprecating style that goes perfectly with the discovery that he's a big part of the cult phenomenon that Troll 2 has become thanks to its reputation as "the worst movie ever made".  He's new to this whole idea of "bad movies", but he embraces it with glee.

The rest of former cast has also not achieved stardom, so don't expect any surprises in that department.  But what was going on with the cast at the time, and how they reacted to the film varies wildly.  Of course, people go very different directions in life, and some stories are happier than others.  The film shows but doesn't comment, and doesn't push.  After all, that's not what we're doing here.

I intentionally didn't watch Troll 2 prior to watching the doc.   In some ways, I thought it would be more fun to hear what others liked about the film before going in, maybe get my head on right, and I stand by that call (look for a Troll 2 review later this week as I found it on Netflix).

What didn't surprise me was that the group that seems to have formed to make the doc and start visiting pop-culture cons realizes in the course of the production that maybe this whole Troll 2 thing is a bit more limited in scope than they'd been led to believe when attending screenings in cities (like Austin) where celebration of genre film is a part of the culture.

I mention The Alamo Drafthouse's carnival barker approach to drawing in its customer base, because I do think that's a fairly rare thing.  San Francisco, New York and other places have their film-culture thing down pat.  They know not only how to cater to whatever audience is out there, but how to build excitement and grow the audience.  I'm not sure even a much bigger city like Houston would do as well as its not my immediate perception that even their Alamo Drafthouse locations have film programmers working to develop the audience in the same way.

I mean, hell, we had the second public screening of Birdemic (a movie that deserves a documentary if there ever was one) here in Austin.  Sold out.

And, of course the director, Claudio Fragasso, takes part in the documentary.  His wife/ significant other wrote the script, part of the cheap European exploitation of making movies "look" American but for markets primarily outside the US.  Things get a bit off-kilter when you realize the director is coming all the way to the states but seems to not quite get what is happening with Troll 2, that the resurgence is due to smart-alecky American 20-somethings having a laugh at the movie's expense, not an audience that finally matured enough to "get" his film and re-cover it from the discount bin.

That and seeing actress Margo Prey are the two toughest parts of the film to watch.  As much as the movie wants to be a celebration of the fun had around the film's recovery/ discovery by a new audience, docs capture more than a tightly scripted narrative where everybody but the villain walks away winning.

I loved seeing the various screenings (seriously, the screenings for bad movies are super-fun.  If you ever have the chance, GO) and events that had occurred around the film, seeing the Alamo Roadshow getting set-up, and even the occasional awkwardness around the Q&A as the poor director took the obvious questions.  But part of all that is the weird "celebrity for a night" bit that folks like Hardy get to enjoy.  It may not be the appreciation they sought when they took the role, but its embracing that it is what it is, and that even your goof-ups are okay.  Movies can be about bringing people joy, even if its by accident.