So, as some found horrifying, I didn't take to Allen's 1979 film Manhattan.  I've generally basically liked the Woody Allen movies I'd seen, so I gave Allen's follow-up, Stardust Memories (1980), a whirl and hopefully my positive reaction will get me back in your good graces as a watcher of cinemaaaah. 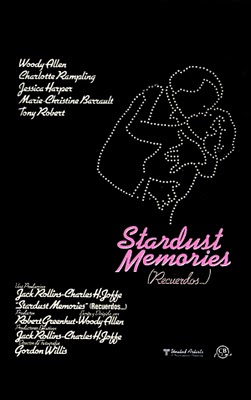 Basically, Stardust Memories solves the problems I had with Manhattan in many ways, or The Problem I had with Manhattan, which was that I finished the movie thinking "and so what?".  It seemed as if in Manhattan Allen had found he had a particular patter down from Annie Hall, found he could play himself in his own context, and it didn't really matter if the story went anywhere or was basically upperclass urbanites mistaking their high school-ish romantic tangles as interesting enough for the rest of us (yes, I got the thing that Allen's character could only connect with a high schooler.  All well and good til you consider his real life marital woes, which...), and the clumsy, flailing quest for something "deep" by self-medicating and spending too much on therapy that went nowhere as a pursuit unto itself.

Stardust Memories acknowledges all the questions, perhaps a bit too on the nose from time to time, but it at least tries to move beyond Allen in one of his stand-in roles, but challenges the character, adding on the layer of the frustrated artist at a crosspoint in his life of the guy who has made it, and all the expectation and responsibility inherent.  The trials of the filmmaker, piled on top of the usual hand wringing Allenisms over the allure and complications of women drive the character conflict, and create enough of an arc to give the movie the weight that Manhattan sought for but never achieved.

I guess if you're going to have a "character driven story", this is a pretty darn good example of what that can look like, even if its hard not to guess how close the "character" is, as pre-usual, just Allen casting himself against good looking women.

Watching the movie, I still grapple a bit with some of the line delivery and Allen-patter, and 70's-era signposts for intellectualism that had become a parody of themselves by the time I came of age, but I won't hold it against the film, especially as it pushes the narrative boundaries a bit, and effectively at that.  Further, while Manhattan is always the movie that gets the credit for the visual love letter to New York, I'll take the work in this movie.  Even without the dialog and banter, it seems to use the frame less to show and more to tell the story.