If you've never seen Creature from the Black Lagoon (1954), it's an absolute blast of a movie and pretty much sets the tone for every succeeding creature feature to follow - but it also leans a bit on the set-up of movies like King Kong.  Intrepid explorers/ scientists have some vital but benign evidence, return to the spot  far from civilization where it was found, and modern man can't deal with the havoc that ensues when an unexpected monster appears (and makes off with the stunningly attractive woman along for the ride). Creature is fun partially because of the raw science-adventure tone that movies like Prometheus try to capture, of lantern jawed scientists throwing themselves into the path of danger in the name of discovery - along with a scrubby but affable crew along for the adventure who know their protocols are there for a reason.  As well as knowing natives may be superstitious, but they're also not crazy, so sometimes you just avoid their "Black Lagoons" if they suggest that's not a good place to bring your boat.  But: SCIENCE.


The underwater photography of Creature still holds up remarkably well, and in the BluRay I just watched, its so crisp and clean, it looks like it was struck from the print yesterday.  The Gill Man's suits still look terrific under the water, and even when the diver is there to explain how he did it in the bonus features, its still a bit unbelievable.  If you've only ever seen still photos or statues, you're not getting the full, creepy effect of a breathing, moving fish-guy.

It's also the Universal picture that works the best as a straight up monster-scare-fest.  Dracula is creepy, but relies on mood and dramatic irony as much as anything else.  Frankenstein and Bride are about the misbegotten lives of our monsters, but the Gill Man is a straight up wild beast who is in his native habitat, immensely strong and incredibly irritated that anyone is in his lagoon.

I would be remiss in not mentioning Julia Adams and her gratuitous swimming scenes because - wow.  I am sure this worked even better in the original 3D presentation.*

The movie reflects ideas about evolution that I'm not sure were held in the 1950's, but certainly aren't how we think of things today.  There are not really "evolutionary dead-ends" as the creature is suggested to be - but there are highly successful evolutionary paths that allow a creature to continue to exist in their environment.  I think we can assume being a 6'5" gill man with huge claws and tremendous strength was to this branch's advantage.

But let's not get technical.

It's a great movie with genuine tension, great creature moments, terrific cinematography beneath the water and, again, Julia Adams. 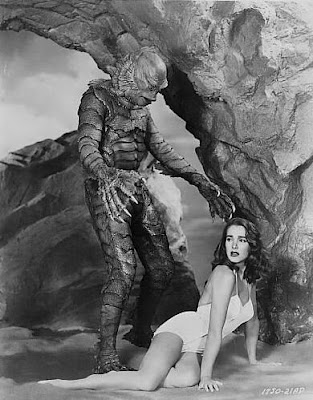