It speaks volumes about the work done in the 1925 silent version of Phantom of the Opera that its still the version of the story most people are familiar with, and which evokes images in the mind somehow more powerful than a smash Broadway musical that's been running for 250 years.

For reasons as mysterious to myself as anyone else, I read the original novel by Gaston Leroux when I was 15.  The book was a spirited, if creepy, adventure story about a very odd, very deadly music enthusiast living in the catacombs beneath the Paris Opera House.

If you've never seen the Chaney-starring version of the movie, you absolutely should.  I saw it the first time in high school when I bought a copy of the movie out of a bin of movies which had seen their copyrights expire and I've tired to own a copy in whatever has been the latest video technology.  You can watch the film now at Netflix!

However, that's not the version that came with my new Universal Monsters boxed set, likely because of the lapsed copyright.  Instead, I got this 1943 version starring the always terrific Claude Rains as The Phantom. 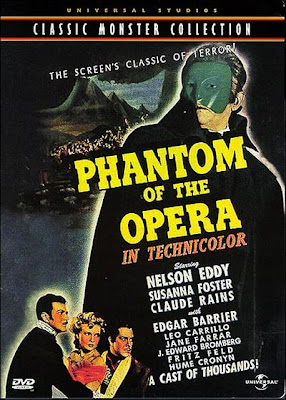 It's...  not my favorite movie.  Rains is fine, but the movie spends a serious amount of time setting up the identity of the Phantom well in advance of the start of the book's actual starting point.  It's a stunningly linear movie, bypassing building drama or tension by showing all the wrong scenes, such as the Phantom threatening Carlotta and his furious sawing of chains in order to make the chandelier fall.

I dunno.  Nothing about the movie really worked for me, from the endless opera scenes to the all-new, all-different origin for The Phantom - one that doesn't make sense (the documentary associated with the film clears up what happened).  I am sure this fit sensibilities of the time perfectly well, but Raoul is a bit of a tough sell on a good day in the original novel, and here he's merged with the police inspector character from the novel and a male opera performer is made a rival for Christine's affections in true Archie Comics love-triangle style.

Its just a weird take.  The essentially add in 15 minutes at the beginning of the film that isn't in the book - and while it establishes the identity of The Phantom - unmasking the Phantom is half the interest of the story in other versions.   Its all very much on the nose, leading the audience along exactly step-by-step, leaving no topic a mystery to be revealed.  Pretty much from jump, everyone knows exactly who "The Ghost" is - and nobody seems much freaked out their former friend is running around their workplace after having murdered someone.  Strange days.


I hear there's a good version by Hammer, so maybe I'll dig that one up.