In 1989 I caught my first episode of Mystery Science Theater 3000, which featured the movie Bride of the Monster.  At the time I had never heard of Ed Wood, and I wasn't terribly aware of the sea of terrible monster movies out there.  But I like to know that my adoration of terrible movies sort of begins and ends with the work of Edward D. Wood, Jr.

When I watch a movie like Birdemic: Shock and Terror, a movie so abysmally, ineptly put together that those watching it assume it has to be a put on, I think of Ed Wood and his sincere belief in his projects, and while I understand the desire to refuse to believe anyone could be so myopic...  no.  We're funny things, us people, and we have rich visions that we are often unable to translate. 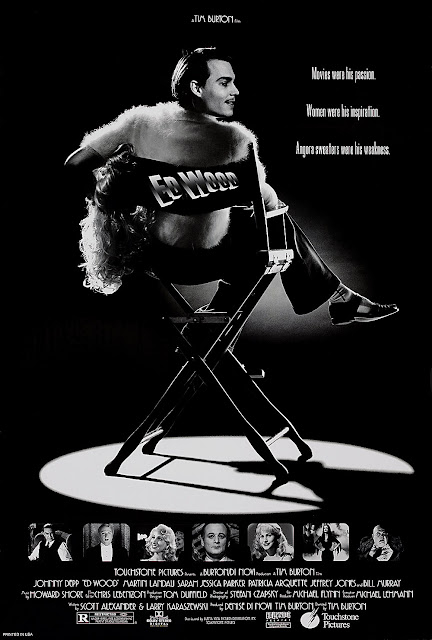 Ed Wood was released in 1994, and among the folks I worked with in film school, it was a bit of a totem.  We quoted from the movie endlessly, and we believed in the central conceit of trying to follow your uncompromised dreams to make the product you want to make.  And sometimes that meant exactly using pie-plates on sting to recreate a UFO crash.*

This scene (language NSFW), is more or less every project I ever did in film school in a nutshell.

It doesn't fail to escape my notice that one of my favorite movies, this here Ed Wood, an Academy Award winning film, is about the man behind movies people won't pay to see.  No small bit of irony there.  I also remember that despite the Tim Burton pedigree and backing from Touchstone/ Disney, the film didn't actually perform all that well.  It was a vanity project about a filmmaker 95% of people had never heard of and if they'd stumbled across his movies, had likely regretted it.

However, it's still one my favorites, still one I quote even when I forget that's what I'm quoting (or, rather, I find myself quoting Plan 9 From Outerspace via Ed Wood "Your stupid minds!  Stupid!  Stupid!"  It'll make you feel better, I promise.).   Really, it's an incredibly punchy movie with some of the best dialog I can think of.

But what the writers managed to do, to find the story within the movies of Lugosi and Ed Wood, is incredible.  The relationship between the fallen giant of the silver screen and the guy who wants nothing more than to fill the world with the sorts of visions Lugosi gave him in his youth should be simple, but its the back alleys of Hollywood, where the guys who never quite worked right within the system - who couldn't make movies that would play well in Idaho - it's a look at the folks who didn't make it in the Hollywood game, but who maybe cared even more than the big pictures.  Unfortunately, the dreams may have exceeded ability - but even then you get a memorable movie, just maybe not for the reasons you were counting on.

While its no secret Burton has made a career out of making films about those with outsider status worn on their sleeve, he's so often hidden behind romantic notions early in his career, silliness, and in recent films - CGI and appealing to the kids - that the characters are easily dismissed as the flights of fantasy that belong in a storybook.  Of the Burton movies I've seen (and I've only missed a couple), this is the one where, despite the goofiness, the mugging, etc... the characters feel three-dimensional and more than a sum of awkward parts put together to leave an impression to appeal to kids who wear black between ages of 14 and 25.

Whether the final product was worth it or not, the world created by Ed Wood is the point, and it was a world in which an elderly drug addict who had no friends, family or money could find a home and still be heralded as a great.  Of course Wood's cross-dressing as presented in 1994 was still a fairly edgy concept, and while I won't pretend that the world has embraced transvestites, thanks to the power of the internet and reality TV, the myriad concepts of identity and sexuality embraced in the film are probably better understood by the general public now than even at the time of the film's release, but that doesn't change the tension around Ed's conflict with his own identity and how we steps into the director's chair once he's found a crew that's all right with him in pumps.  And Johnny Depp handles the role with a certain poignancy I'm not sure he's had of late.

Speaking of, it's all all-star cast you probably don't even remember the movie having.  Bill Murray plays Bunny, Ed's pal and semi-confidante.  It also has Sarah Jessica Parker, Patricia Arquette, (one of my favorites) Jeffrey Jones, Vincent D'Onofrio, Lisa Marie (I miss her) and the very young Juliette Landau in a smaller role.  Heck, it stars King Kong Bundy as Tor Johnson.

Again, Landau won an Oscar for his role as late-career Lugosi, and it was well deserved.  I doubt anyone knew much about Lugosi's post star-turn years in the 40's - 50's (again, Dracula was 1931) and the life he was leading before his death, except a few in the horror-movie groupie world.  In many ways, we assume that when a star falls, they deserve it (and some of them do).  But we rarely think much about what that life of the former A-Lister might be like, assuming they must be sitting on their gold couch surrounded by money.

The hope inspired in Lugosi through Ed Wood in the film makes for a terrific buddy picture that carries on even after Lugosi's passing in the film.

Lugosi got his wish. The Atomic Supermen did, in fact, take over the big screen and popular entertainment. The legacy of his pictures from Dracula to The Black Cat to Bride of the Monster and the popularity of classic, cheesy movies.

I believe it was Paul Marco who complained that Burton should have kept to the truth, at least in regards to the spaceships used in Plan 9. Instead of using the Lindberg Flying Saucer kit. The story as I heard it goes that Marco offered Burton the actual models used in the film, but Burton instead went on to perpetuate the myth that they were paper plates painted silver and glued together.

Interesting - I just stumbled across an auction for the saucers used in Ed Wood (not Plan 9): http://www.liveauctioneers.com/item/6321777

Well, alas, it's too bad about the model myth perpetuation, I guess. I'll be honest, I'm not sure if I have feelings on that one way or another.