Born Béla Ferenc Dezső Blaskó in Hungary, Lugosi arrived in America in the early 1920s. By 1927 he was cast as Count Dracula in a Broadway show.

Most famous for his role as Dracula in the 1931 film, Lugosi found himself typecast and caught in a strange whirlwind of the Hollywood system which kept him in spook pictures, more or less, his entire career. 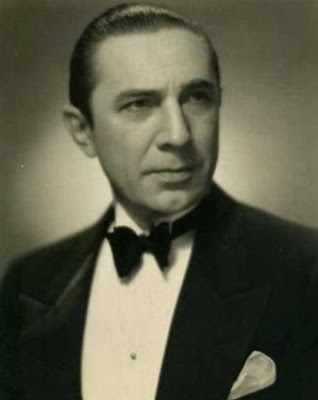 It's the Halloween season.  Go out and get yourself a copy of Dracula if you've never seen the original movie.  He's pretty darn good.

Of the Universal big three (Karloff, Lugosi, Chaney)he's my favorite. I've heard the new Blu-ray version of Dracula looks incredible. Just bought the Bela Lugosi collection which has The Raven, The Black Cat, The Invisible Ray and the Murders in Rue Morgue. So far, just watched The Raven, which was pretty good.

The good news is that Dracula is still popular, and if the right creative team comes along, we can get a great Dracula. I haven't seen the Coppola version in years (and I wasn't a fan) - but I think its been a generation and we have the right to do a new, big budget Dracula that isn't just a hacky B picture like "Dracula in Space" or "Dracula meets the Internet" or whatever.

I hadn't heard about that Lugosi collection - I'll need to look for it. Only seen The Black Cat out of those.