There is nothing like a beloved Polish sci-fi novel written in 1961 to make you feel like a complete idiot.

That was a better book than I was a listener.

I once saw the Russian film of Solaris circa 1994, but I'll be honest.  I'd had a lot to drink, and I don't remember anything about it at all, but when people would ask, I'd say:  Yeah, I've seen Solaris.  It wasn't exactly a lie, but it wasn't exactly true that I remembered seeing Solaris.  It's like saying you've been to San Diego, but you've only been to the airport. 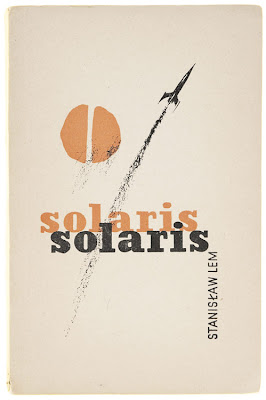 So, on Jason's fiance's dad's suggestion, (I could have actually sat down and read the book, but that isn't going to happen, so) I purchased and listened to the audiobook of Solaris by Stanislaw Lem.  It's no lie that Greg is a much smarter man than myself (and you, too.  Seriously, meet Greg some time), and while I am sure Greg got more out of it than me, the book didn't disappoint.

It was also the rare book that I finished with the absolute certainty that I was going to read it again, because while I had grasped much of the book, I also knew that, thanks to the linear format of the audiobook, what I would have done to re-read certain parts, to flip back and forth in the book to piece it together when new information presented itself - I was just caught up in the flow of the story being told as it unspooled on my iPod.

Lem has managed to pull together a book about ghosts, alien contact, abandoned ideas, human grief, regret, mathematical constructs two miles in height, and a host of other ideas with only four characters, a relic spacestation and a planet on the other side of the galaxy which refuses to give up its secrets.

Psychologist Kris Kelvin has trained for years to become one of the few scientists who, these days, travel to the distant planet Solaris - an alien planet that once promised to change mankind's fundamental understanding of nature, but instead has left us with an infinite number of hypotheses, a few theories and no conclusions.  There is no life on the planet, just a sea made of a strange material that might simply exist, or might be a tremendous alien consciousness.

Upon arriving at the remote station - once populated by hundreds of scientists, but these days, manned by just a few at a time - he learns he has shown just hours after the suicide of his mentor.  And then: the ghosts begin to show.

While at times you want for the characters to quit insinuating, for them to speak bluntly to one another, clearly Lem didn't see these characters, or, perhaps, mankind as capable of such frank discussion, of facing down their own fears, let alone someone else's.    Lem isn't willing to give up his story or his ideas any more easily to the reader than the characters are willing to speak to one another, but he's going somewhere with all this.  It's a fantastic journey of science fiction that truly earns the title, well beyond cheap fantasy wrapped up in spaceships and laser pistols.

I hesitate to recommend until the book until I give it another read at some point in my life, but it was enjoyable enough on this go-round.  When compared with books that seem to get bigger play - ex: Stranger in a Strange Land, it may also have some ideas that stretch the bounds of hedging into using sci-fi as a way to do some handwaving about improbable philosophies, but unlike Stranger in a Strange Land, it didn't feel so much like a writer coming up with a barely-baked sci-fi Christ figure to engage in personal wish fulfillment.  Where SiaSL stopped with the possibilities of Martians, Solaris expands on truly alien intelligence and the flaws of humanity in the reflection of the eyes of the truly alien.

Yes, much of the technology feels dated from the 1961 publish date, but the themes and concepts may feel relevant and timeless right up til the moment we are casting ourselves out among the stars seeking contact.  The book never feels hemmed in by the culture that spawned it (perhaps why its been adapted into films in both the US and former USSR), and doesn't dwell on the specifics of technology, etc...  that takes up the page count of so much American sci-fi.

Stanislaw Lem is a gem. You are right that this is one of his more challenging novels. It is best to go back and read it for a second time to grasp all of what Lem is trying to get across. I love the idea that even if we stumbled across something truly alien we wouldn't be able to understand it anyway.

My favourite book by Lem is The Cyberiad. It is a collection of humorous short stories. Detailing to waring robots who act more like neighbours who don't get along with each other. The juxtaposition of the stories make it quite funny.

Even though Lem was a contemporary of Heinlein his books did not get as much play in North America due to the availability of the translations.

Speaking of English translations of east European sci-fi. You really should check out Roadside PIcnic by Arkady and Boris Strugatsky. I remember getting a text file of it in university to read as the english translation was out of print. They've just recently released a new printing though.

Awesome! I keep a running Google List of books I need to consider picking up. As much as I liked Solaris, I'd definitely be up for more Lem and his contemporaries.

Okay because you asked for it I will let you know some other books that are excellent science fiction but are probably not as well know:

"The Stars My Destination" and "The Demolished Man" by Alfred Bester.
"Way Station" by Clifford Simak
"A Canticle for Leibowitz" by Walter M Miller
"Flowers for Algernon" by Daniel Keyes
"Norstrilia" by Cordwainer Smith