During an attempted airspeed record setting run across the US, Jim sets down in a field in Kansas on the farm where Myrna Loy's "Ann" lives, improbably, with her parents.  Ann sweeps Lane off his feet, and Lane returns home with her in tow as his bride.  Spencer's "Gunner" seems like a spurned lover at first, but the impulsive coupling of Jim and Ann loses its shine during the first air race when Ann sees what it really means to live on the edge of certain doom and let that into your life, too, and the relationship between Gunner and Ann deepens with a morbid edge.

I'm mostly familiar with Loy from her work in The Thin Man movies, so its a pleasure to see her here, stretching herself into dramatic territory and working with a different set of A-list talent that can keep up and make a scene work - especially her side-bar relationship with Spencer Tracy as Jim goes off into the sky. 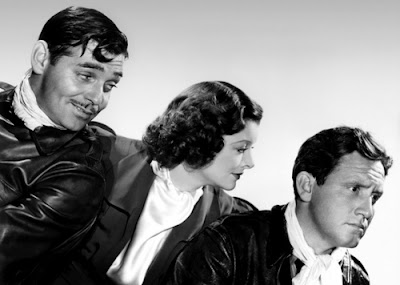 By the way, there are some great shots in the movie, done, I guess, with models, and two shots that I still don't have my head around how they happened without the crashing of actual airplanes, but its possible and likely those were actually models.  I have no idea.  But the flying scenes are pretty terrific for Pre-WWII movies.

Major spoiler:  The end of the movie is tragically too optimistic as Jim and Ann are delighted at Jim's new, safe life in the US Army Air Corps as an officer.  In fairly short order, of course, we can probably expect Jim will be in Africa or Europe and those planes will be torn to shreds by flak.  But, hey, that's still a few years away.  End spoiler.

I really enjoyed this movie.  The themes still resonate and the performances work.  Its great seeing a young Spencer Tracy, especially with his style so at odds with Gable's matinee idol approach, but here it plays as two very different guys making it work, but with rising tension between them (and, no, not rivalry over Loy). Worth a spin on the DVD player or off cable sometime.

Late edit:  here is a list of the planes used in the movie!