I can't remember if I'd watched this movie before or not, because bits looked familiar, but I'm counting this as my first viewing of Dracula's Daughter (1936).

Following quickly on the heels of 1935's Bride of Frankenstein, this movie took a different angle from the Frankenstein sequel, and this one features a lot of the titular character instead of a scant few minutes and mostly hissing at Karloff.  However, it lacks any of the over-the-top insanity of Bride. 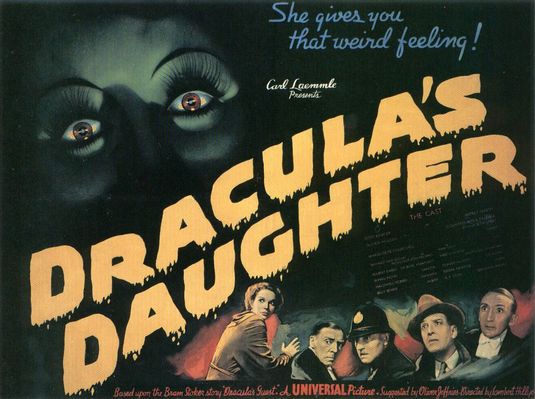 Like Bride, this sequel picks up immediately on the heels of the previous film, but doesn't have any of the Dracula cast, except for Edward Sloan as Van Helsing (now under arrest for the "murder" of Dracula.  Man, sometimes it just isn't worth it, you know?).  The budget seems similar to the 1931 film, but the scope is somehow, oddly, smaller and feels very present in 1936 instead of the "I have no idea when this takes place" vibe of the 1931 original.  (I contend that once you suggest Dracula lives in the same world as automatic weapons, you've lost something).

The biggest problems with the movie are the following:

People, when your movie features a Dracula, I want to be concerned for somebody in the film.  Let me clarify on that:  I want to be concerned about someone who isn't Dracula.  In this movie, the only sympathetic character IS Dracula (our lead is sort of a jerk), and I don't want the Dracula trying to not be a Dracula using an armchair pundit's idea of psychology.  (Also - the scariest thing in the movie is the description of how, I guess, they tried to end alcoholism in 1936 - by shoving the drunk in a room alone with a bottle for hours).

The movie is full of varying performances, and I'll go on the record saying I grew to appreciate Otto Krueger's take on dealing with vampires, which seemed to consist of just annoyed disbelief he had to put up with any of this nonsense.  You also have to like Irving Pichel's weirdo Sandor.

While quite cute, Marguerite Churchill's Janet is a bit distracting, even when we're supposed to be getting a perkier Rosalind Russel vibe.

Hats off to Gloria Holden who straight up DOES NOT BLINK, EVER in her role as Dracula's Daughter, Pam.


Her name is not, in fact, Pam and I made it up because it would have made the movie 20X better.  Her name is the very made-up sounding "Countess Marya Zaleska" (not Pam Dracula), and Holden certainly looks the part of a striking European aristocrat, and a bit like my former co-worker, Lesley.  And she seems to take her role seriously.

The more I watched the movie, the more I believed I'd seen most of it.  Its just largely forgettable.  The few "scary" scenes are anything but.  However, you do get a chance to see other actors run around on the staircase set from the first movie.

Not sure I recommend this one, except to the Dracula completionist.  It is super short, so you got that going for you.