Probably the weirdest thing about this movie, an all ages movie featuring classic Universal Monsters at their least scary meeting the comedy duo of Abbott & Costello, is that there's a sort of continuity to the Universal Monster pictures, and this movie is absolutely a part of the long narrative tied together by meetings of Frankenstein, Wolfman and Dracula.

In fact, in addition to the stars in the title, this movie also features Bela Lugosi as Dracula, Lon Chaney Jr. as Talbot/ The Wolfman, and Glenn Strange as Frankenstein's monster (who he'd played in at least 2 prior films).  It's 17 years after the first Dracula film and 16 years after Frankenstein (and 7 years after The Wolfman, so you don't need to look that up). 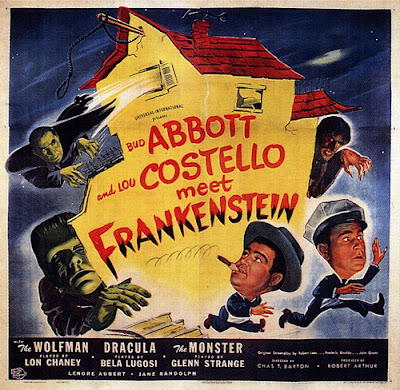 I saw this movie the last time when I was 6 years old at a birthday party when you could rent 16mm projectors from the library and parents would kill time during birthday parties with the novelty of watching a movie IN YOUR HOUSE.  All I could remember was the final, chaotic scenes in the castle in sort of a vague, snap-shot sort of way.

I'll be honest, Abbott & Costello are not my favorite comedy act.  They have their moments, most certainly, but I've never been a huge fan, and I'm not sure that it holds up as well as you'd hope for.  They're at their absolute best when they take a minute to have an aside and you can feel them slip back into their old comfort zone of the stage and its Bud and Lou having a moment with word play.  The broad physical comedy isn't their strong suit, but there are a few funny moments even there (Lou deciding if he's going to put an orange back while The Wolfman waits behind the door).

Lugosi is actually really on in this movie, something I was thinking about as I'm also watching Ed Wood right now in parts.  He's pretty fantastic as the Count, even at 66.  Even when The Count has to drive a boat or push around a cart.  Karloff had moved on by this point, so Glenn Strange makes a fine impersonation of Karloff, and the kids probably wouldn't notice the substitution, but Karloff fans will miss their guy.  And, ol' Lon Chaney Jr., what can you say?  He's doing his best there.

If you're looking for silly fun with the kids for Halloween, this is a great way to introduce them to 3 of the Universal Monsters in one fell swoop and a minimum of scare.

I'm glad I finally watched it (on Netflix Streaming) as it gets cited a lot, and seems to generate trivia questions, and can feel I've checked off one more of the Universal movies.  But. yeah.
Posted by The League at 10/12/2012 11:31:00 PM