This is sort of the second movie I've watched in recent months about a filmmaker tracking down the subject of a failed project that has found a second life as a bit of a laugh for a winky, nichey audience of jerks exactly like myself.  As someone who grew up on MST3K and still has no problem watching Frankenstein Island and laughing himself silly, I try not to think too hard about the people behind the camera for whom producing, say, The Curse of Bigfoot, was their life's dream.

I worked in video production for a few years in and out of school.  It's hard, tedious work and I don't miss it (sorry, Paul and Juan).  Circa 1989, a man named Jack Rebney was working as writer and star on an industrial film for Winnebago sales associates, and the blue-tinted outtakes from the shoot captured his endless stream of profanity and frustration.

Confession time:  I am all puppy dog tails and whatever here, but I have a short temper and am known to curse like a sailor, especially when frustrated over a long period of time trying to make the same task work.  Jack, I feel ya. 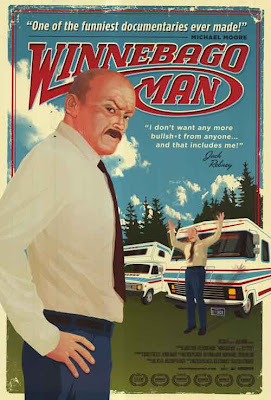 Austin filmmaker Ben Steinbauer was obsessed with the VHS dup he had, and then the YouTube meme that stemmed from the VHS tapes.


The doc follows Steinbauer's quest to find Rebney, and then what happens when he locates Rebney living in Northern California in relative seclusion.  It's not spooky or anything, so don't worry about that.  He's just a bit of a recluse - and the personality that was on those tapes is tied to a man who did decide to step away from the world a bit.  Rebney may be "The World's Angriest Man", but he's incredibly bright, mannered, well spoken - and he does, in fact, make an interesting subject.

One of the things that impressed me most about the movie was that if Steinbauer was going to insert himself into the film as the filmmaker, he didn't present himself with omniscient clarity.  He makes mistakes - he can't keep up very well with Rebney, his plan to make a certain film or have certain outcomes doesn't work.  The crafted narrative that certainly seemed a part of, say, Best Worst Movie, falls apart in the face of Rebney's hurricane force personality.

There's no doubt Rebney is an interesting guy, but one who clearly lives in his own head.  Steinbauer seemed unable to dig much up on the man aside from the clip and whatever he got in conversations with Rebney.  I was a bit surprised he seemed unwilling to verify or follow up on what appeared to be a significant past, prior to the Winnebago debacle, even when he alludes to what he thinks might have been Rebney's state when the video was made.