When I was in 6th grade, I walked into Austin Books and Comics and had some birthday or Christmas money to spend.  I don't remember much about my early days of comics collecting, or chronological order of events, but I most certainly remember standing in ABC, flipping through the pages of a collection of Dark Knight Returns and not buying it.  I've always regretted the decision.

Because it was a whole 3-6 months later that I bought a trade paperback of the comic that changed everything for me.  And I could have read that comic much, much earlier. 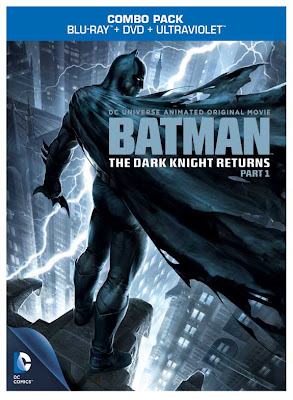 Today that copy of Dark Knight Returns is in a sealed bag with a board.  It's worn from wear from the literally dozens of times its been read cover to cover, not counting the hundreds of times it was simply picked up and leafed through, nor the times it was handed off to friends (even as they were told: do not lose this, do not tear the pages, do not read it while eating, do not in any way harm this book) and, when I was making some early decisions about Jamie, she took it with her as assigned reading.

Flat out, I have most of the book memorized.  Like some people spent their middle-school years memorizing baseball stats or all the words to their favorite sci-fi movie, I (and a lot of you, I'd guess) were memorizing every caption and thought bubble in Miller's comic attributed to Batman.  I was a Batman nut.


As I got older, I moved past the visceral experience of the read and the jokey portrayals of authority figures and recognized it for the satire it was and for the mix of messages that Miller throws at the audience, asking the audience to go along with him as he paints a world in which a Batman is not an answer, but a sane answer - and it looks not unlike our own.  And, like so many other dystopian futures, Miller's seems to come into focus a bit more with every passing year.

At some point I moved past neat looking pencils in comics and began to really admire what Miller had done with panel and page layout.  People forget - but DKR was one of the first books to replace thought bubbles with the caption boxes, and at the time, it was a bit revolutionary.  But, mostly the management of time and voices Miller brought to the page, sometimes cramming 16 panels onto a page, sometimes with a different person in each panel speaking their voice - the television man-on-the-street interview became the greek chorus of the book, emulated later in movies like RoboCop.

It's a social satire, a political satire, media satire, a divisive criticism of conservatives and liberals alike, and as I return to the book now every few years, I see something in it that I didn't see before.  Miller takes a lot of crap these days for his vocal, right wing punditry and the failure of his The Spirit movie.  But he's a true genius of the medium in a medium that too often rewards mediocrity and finds its comfort zone in refusing to challenge itself.  Newer audiences that don't appreciate the work may not have the context of the 80's in which to find an immediate touchstone, but that they reject a comic with so much depth of commentary - young people these days.  No respect.

No movie was going to capture all that, but I tip my hate, because I think DC Animation tried very, very hard to not just stay true to the book, but the tone of the era in which it appeared.  Where Zack Snyder's Watchmen cued eras by blaring Top 40 hits from the year shown and pancake make-up on the actresses shown across age spectrums, this movie has the claustrophobic feel of the city in a post Bernie Goetz-era.  Artist Jordan Gibson commented a while back that if this movie failed to be scored with moody synths, so familiar to edgy cop films of the era, this movie would have failed a little bit.

Jordan was right, and the producers knew it, too.  I was blown away when the synths really kicked in with Batman's first chase across the city.  Just beautifully done.

Of course not every scene played out exactly as I'd hoped or imagined.  The pacing on some dialog was not the soundtrack I'd had in my head since the mid-80's.  Gordon doesn't have the voice of a chronic smoker of 70 years as played by David Selby (everyone's too healthy these days.  So few interesting voices).  And, speaking of RoboCop, Peter Weller steps into the caped crusader's boots as the baritone behind the cowl.  Holy smokes, does he ever sound pitch perfect to my ears.  I was certain only two men could do the job, Eastwood or Conroy - and Weller did it.*

The movie recreates some scenes, frame for frame.  Miller and Klaus Janson's work was simply too compelling not to recreate.  But in other places shortcuts are taken, and you almost want to raise you hand and ask the director "why NOT on this shot?".  By the time the Mutant problem gets addressed, however, the story has kicked into high gear and you mostly forget to wonder what else they could have done.**  I'm not really familiar with the name Jay Oliva as an animation director, but I think he did a pretty darn good job.  And, he did storyboards on the upcoming Man of Steel, so we'll see how that goes.

The movie only covers up through the defeat of the Mutant Leader by Batman, the equivalent of the first two issues of the comic.  The rest is coming in a "Part 2".  Unlike the other DC adaptations (see:  All Star Superman) the story hasn't been as truncated or turned into a series of plotpoints from the comics.  This is the first DC movie with real, filmic pacing - eventually leading to something like a 2.5 hour movie of DKR, which seems about right in scope - just as Batman: Year One needed to be 2 hours and All Star Superman should have been a 12-part series in 20 minute installments.

I know today's kids don't really "get" Dark Knight Returns, but maybe the film treatment might demonstrate to them not just what was great about the work itself, but why I sniff at a lot of what's being done in Batman comics today when this was what I was reading when I was 12.

As an added bonus - here's the video sneak peek of Part 2.


*one must never, ever doubt Peter Weller.
**If I thought they botched one scene, it was the revelation of the reason why the General has sold weapons to the gang.  That could have been done as artfully here as on the page.
Posted by The League at 10/10/2012 11:14:00 PM

You bum! You beat me to it. I got my copy from amazon the day it came out, but since few people who read my blog have read DKR, I felt like I needed to go back, re-read and review it to give my film review context. I agree with virtually all you said, except Weller's voice. Miller's text evoked subtle emotive lines throughout ("I see a reflection, Harvey. A reflection"). I know. They didn't even use that line (another issue), but I really thought Weller was too monotone. No inflection. He sounded the same whether he was angry, introspective, desperate, excited. That's just not what I get from the pages.

I'm glad you mentioned the music. It was fantastic. That just jumped right out at me. They made great use of 80s synth-music.

"It's a social satire, a political satire, media satire, a divisive criticism of conservatives and liberals alike, and as I return to the book now every few years, I see something in it that I didn't see before. Miller takes a lot of crap these days for his vocal, right wing punditry and the failure of his The Spirit movie. But he's a true genius of the medium in a medium that too often rewards mediocrity and finds its comfort zone in refusing to challenge itself. Newer audiences that don't appreciate the work may not have the context of the 80's in which to find an immediate touchstone, but that they reject a comic with so much depth of commentary - young people these days. No respect."

Could. Not. Agree. More.

Peter Weller killed with this line as Batman: "You don't get it, boy. This isn't a mudhole... It's an operating table. And I'm the surgeon."

1. Similar story for me and DKR, or not in the details at all, but in terms of its early effect, etc. In fact, it's fair to say (I'll tell you the story sometime) that I got into comics in the first place b/c of Miller, and specifically DKR and Ronin.

2. I can't imagine watching (or having any interest in watching) an animated adaptation. (Though to be fair, I probably would watch a live action one.) Part of this is general disinterest in animation - part though is maybe a disinterest in a visual medium that does fall so close to the original. I mean, I already can see the drawings - I don't need to see them move!

3. I'm reminded of my Dad, who for a while said he had no interest in seeing LOTR, precisely because it had such a big effect on him as a youth—he'd read it so many times, etc. (Although he did end up seeing it, and liked it.) (That really was an exception of another sort, though, surely?)

4. The synth reference really piqued my interest (I'm a sucker for synths, esp. of the 80s variety).

6. I was always under the impression that the stylistic similarities between Robocop and DKR were no accident. imdb only lists Miller as associated w/ 2 and 3, and I definitely remember him being part of a comic adaptation at some point (no? yes?) - could an uncredited involvement with the first one be a possibility? I refuse to believe otherwise.

Re: Point 5 - It worked for me, but as I said, we've all had voices in our heads for this comic for decades! Its not surprising Jake had a different idea. But Weller's voice certainly worked on my end.

Re: Point 6 - I am sure RoboCop was at least partially influenced by DKR, given how integrated the TV news, etc... was into the movie. Miller's scripts were severly re-written, I hear (perhaps less for the 3rd movie - and then the problem was execution - but you can kind of see Miller in the lines there).

In 2004ish, Avatar Press produced a comic adapting the Miller RoboCop 2 script, and it is significantly different from the movie. Its hard to say which I prefer as I don't know if I could get over the artwork of Juan Jose Ryp, but its certainly different and a bit grimmer.

When I saw the trailer, Weller did sound great. But as I watched the movie, he just has a flatline delivery, although he delivers a few lines well, like J.S. mentioned. I thought it took some of the life out of Miller's script (when they used it). Even Clint Eastwood, who I also have imagined for the voice of DKR Batman, has subtle but powerful emotive inflection. I thought Jeremy Sisto was a great Batman voice actor in the animated Justice League: New Frontier.

Anyway, it's not a deal breaker and this is definitely the best of DC's animated features.