Author Richard Stark took off a couple of decades between Butcher's Moon (1974) and The Comeback (1997),  bringing master-thief back out of retirement.  But, oddly, it doesn't really feel like much time has passed between the two novels, updates in technology, etc... aside.  Stark's voice is much the same as it was when he left off in 1974, but the year is now 1997.  We're in the age of the personal computer, but everyone having a cell phone is still maybe 1-3 years in the future, depending on your demographic. 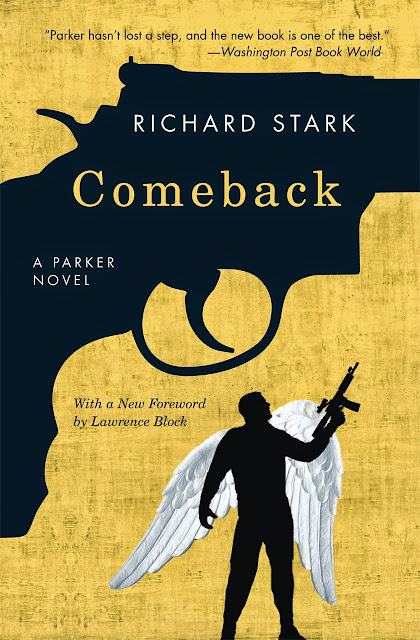 The 80's and 90's also saw the boom of televangelists in a way I'm not sure kids today would understand.  Every cable package came with the PTL Network and a few others, and while you never knew the names of most of the figures, they were so omnipresent, you knew who most of them were (a personal favorite of mine was Brother Bob Tilton*), and it was always a matter of time before most of these folks tripped up and showed their true colors, crashing and burning and teaching a young me the meaning of schadenfreude.  But not until after bilking a herd of retirees out of their fixed incomes.

Parker books always feel tied to the real world.  He's not a super-crook, he's not out using futuristic technology, but this one definitely feels of the zeitgeist of the era, as much as the 60's and 70's novels did from time to time worrying about the pop art scene or crazed hippies.


In this case, Parker reteams with Ed and Brenda Mackey and George Liss to knock over a stadium prayer-meeting worth 100's of $1000's.  Like a lot of the latter-era 70's Parker novels, this one begins with the heist rather than plotting the details using flashbacks and cut-aways to tell the backstory (Stark's eye for the cinematic really does make it mind-boggling that filmmakers haven't done direct translations of his books).  And, of course, things go wrong.

Our inside man might talk, the organizer was never playing it straight with Parker, and the good reverend has a tough-guy of his own on the payroll.

After the bloodbath of the aptly titled Butcher's Moon, it does feel like Stark (the pen-name of Donald Westlake when he's working in a grittier genre) is retesting the waters as this is a fairly simple caper, even if it all does go wrong.  It certainly doesn't have the desperation of The Seventh or the clockwork perfection of The Outfit, or even the fiery chaos of The Handle.  But it's still rife with incompetent punks, lowlifes, schemers, lusty dames, do-gooders who get trampled and crooked cops.  And, of course, Parker, laser-focused on getting the money and trying (once again) to remind his peers that it's a bad idea to cross him on a score.

Speaking of real-life shady televangelists, Houston's own shady as hell Joel Osteen was knocked over after a service last year to the tune of $600,000 - about $200K of which was cold cash.    Much like the good reverend in the book, it's no surprise Osteen hasn't talked about it much since the robbery, lest anyone look too closely at his operations.  I'm just saying.

I took a year off from the Parker books myself, but it feels good to be back.  I look forward to wrapping up the series.