Between March 25th and April 28th, Jamie and I celebrated our 40th birthdays and our 15th wedding anniversary.  Hawaii has been something Jamie has wanted to do since we were two fresh-faced kids in college, and due to many, many factors, it's been something I've not been willing to do or not been able to do.

We set about planning this trip a long time ago, and it finally happened.  We're not exactly jet-setters, so getting to Hawaii was a bucket-list sort of thing for us.  With the convergence of birthdays and anniversaries, it seemed like a pretty darn good reason to go.  And, of course, Jamie's been healthy(ish) for a long time, so any jitters I might have had about this a while back are now long gone.

So, that's that story.

I kind of forgot to take pictures on Day 2 in Maui.  Mostly, we hung around the hotel, swam in the ocean and napped.

The only two pictures I took were of the residents of the hotel, a set of penguins and a koi. 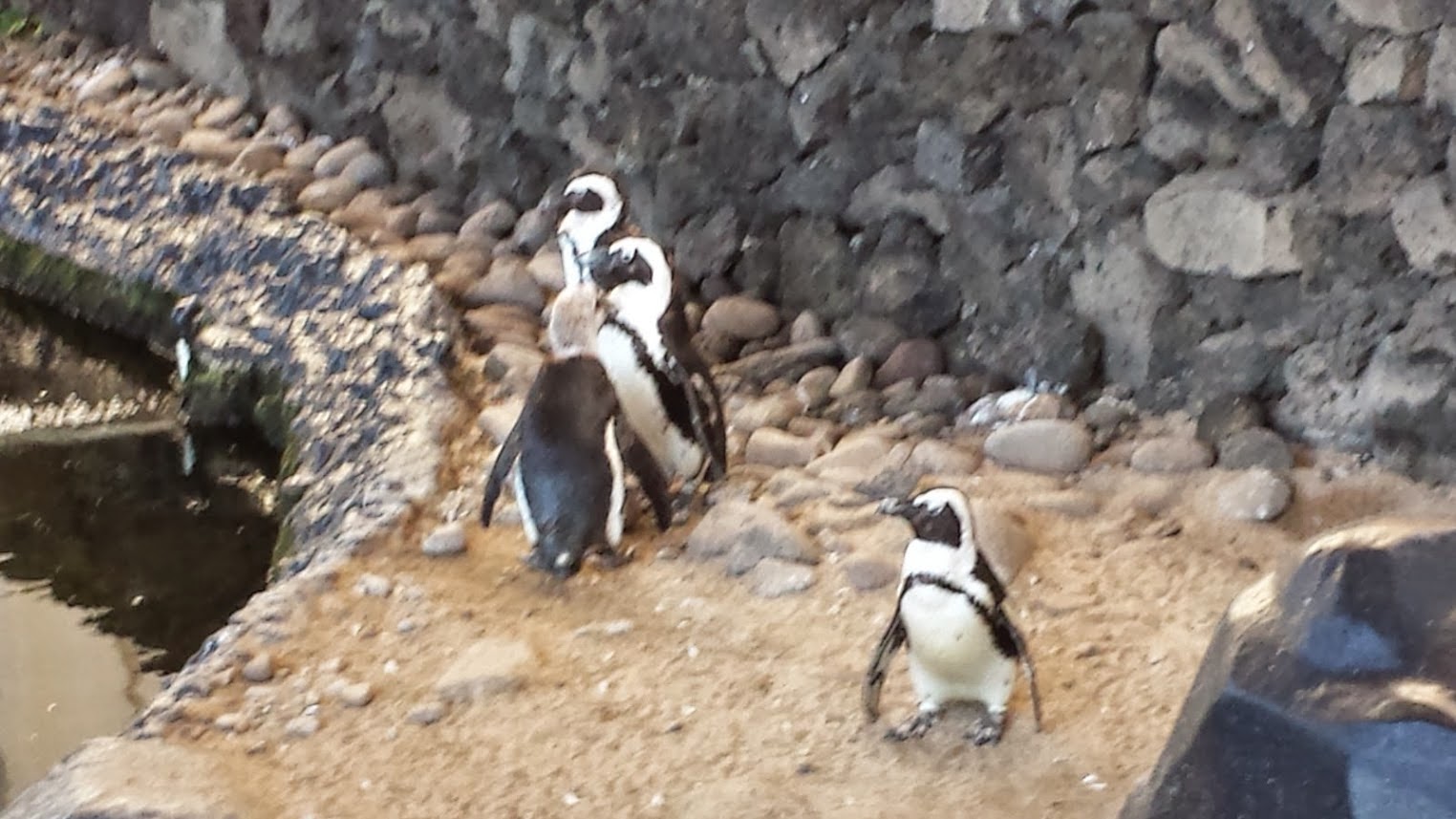 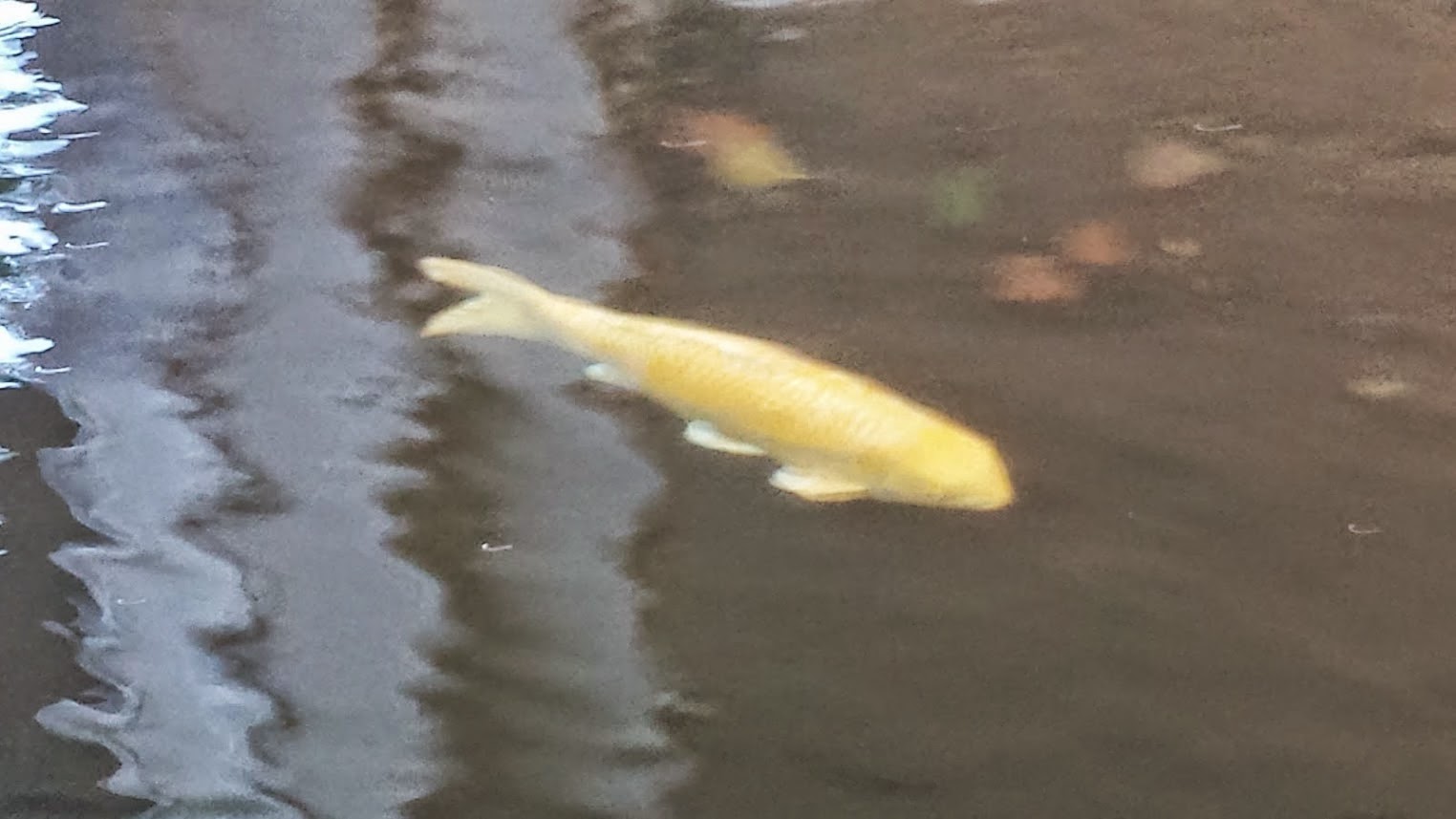 I was still pretty punchy from the time change, and we got up around 6:15 for breakfast (it seems the tourists all get up early as everyone is decidedly not functioning on Hawaiian time.  Even the locals appear to mostly be on mainland time.)

After breakfast, we ran out and bought me a snorkeling mask (I have a loaner snorkel from PalMatt), some towels we'll no doubt leave here, and some other sundries.  Then we hit the water.

There are actually plenty of fish right off the hotel, even if the coral isn't super awesome.  But I had a great time going splishy-splashy.


But I confess, getting adjusted to the time difference has been rough for me.  That, and I have this theory that if you checked me into a hotel and I had no one to wake me up, no pets to wake me up, no alarm, I would literally just sleep until I died from not eating or whatever.  It's not clear that I have a natural ability to wake up anymore.

Anyway, we ate a lovely dinner at the Pacific Rim fusion place on the hotel premises.

Every morning we get up and have our "included" breakfast (it is certainly not free.  Nothing on Maui is free.) here at the hotel.  In the morning, the restaurant is a continental style breakfast buffet (it's a steakhouse at night), where I consume my weight in pineapple and melon slices.  The view looks out on a garden and artificial pond where you might see a duck or flamingo go by.  There is a net over the opening so you also don't get a predatory bird going after your scrambled eggs. 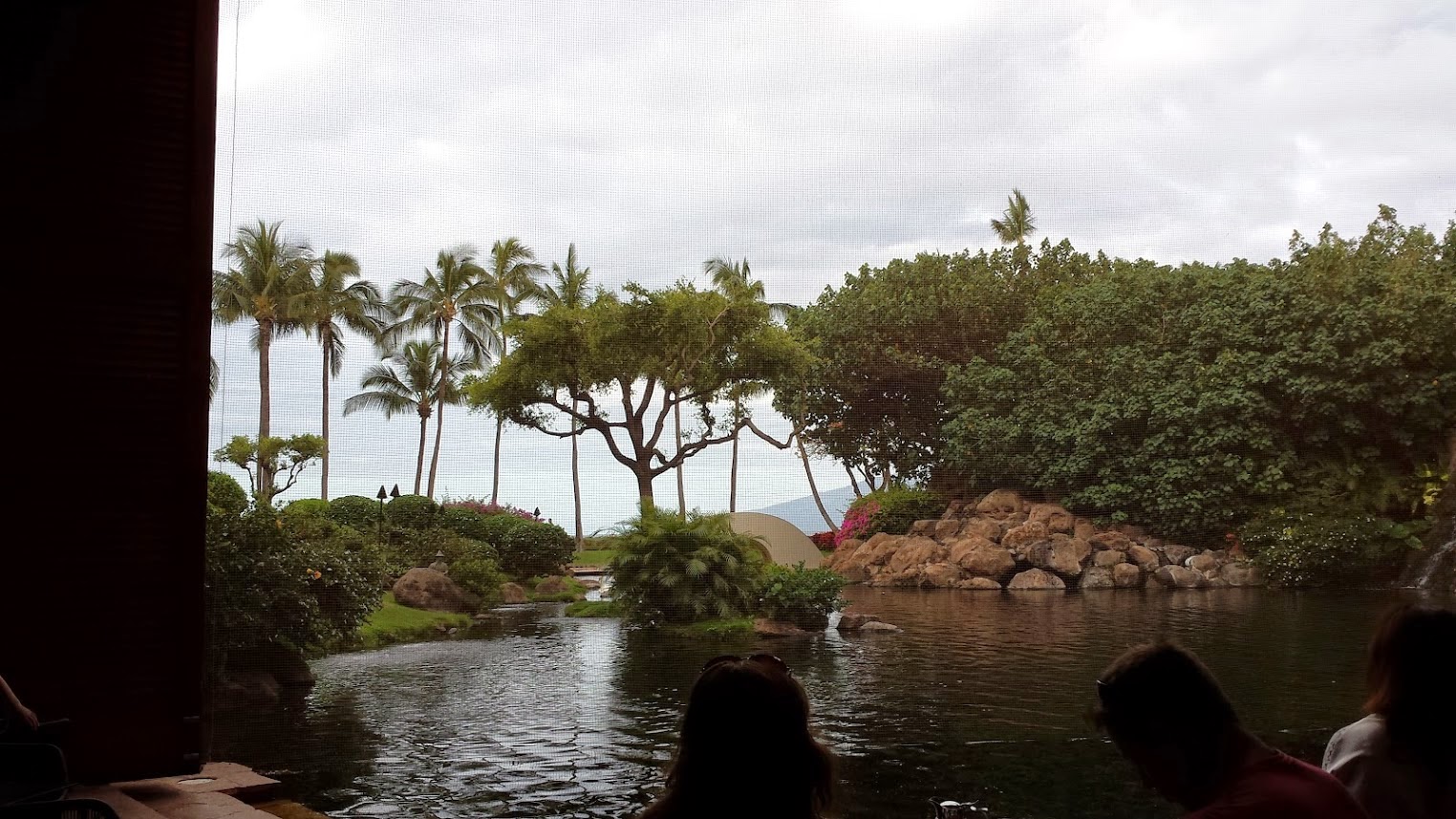 The hotel is open air.  Just imagine any other hotel, but take the roof off.  Pretty nifty. 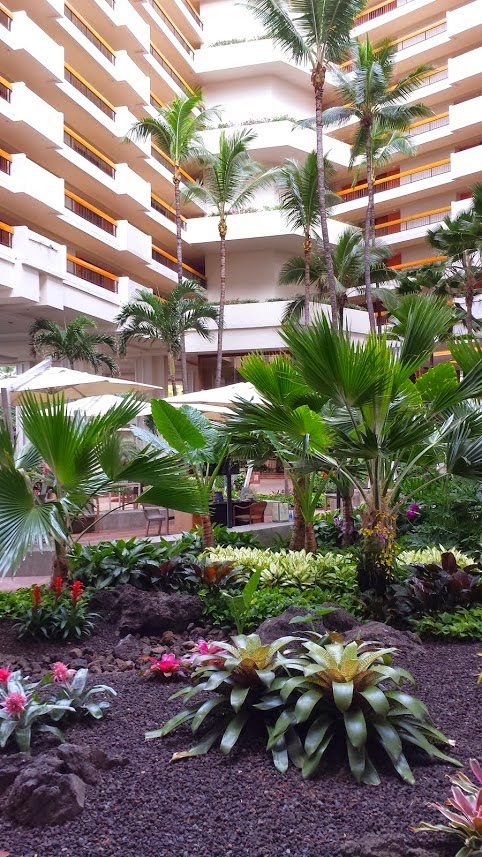 The staff is surprisingly, genuinely friendly.  I figured on professional courtesy and whatnot, but the staff will straight up start talking to you.  And given my perpensity to stop and chat with anyone (something I picked up from both my folks), I have learned not to do this if we're headed somewhere.

Another odd cultural tidbit - and there are many - In Texas, if you're addressed in Spanish, the rule of thumb is to return the greeting in English unless you speak Spanish.  But everyone here says "Aloha" and is sincere about it.  Or "Mahalo".  And it's usual, I guess, for guests to respond with an Aloha or Mahalo of their own.

There is also the sort of laid-back "island time" culture where the pace is slowed to a crawl.   Even listening to local radio has me embracing the concept.  It sounds like small-town radio with reminders to people such as "hey, there's a fire at Kale Street.  We heat people are getting in the way of firetrucks walking out there taking selfies.  You gotta let the firetrucks in, okay?"

Anyway, we got up with a plan for Day 3.  None of which I have pictures of, but there you are. 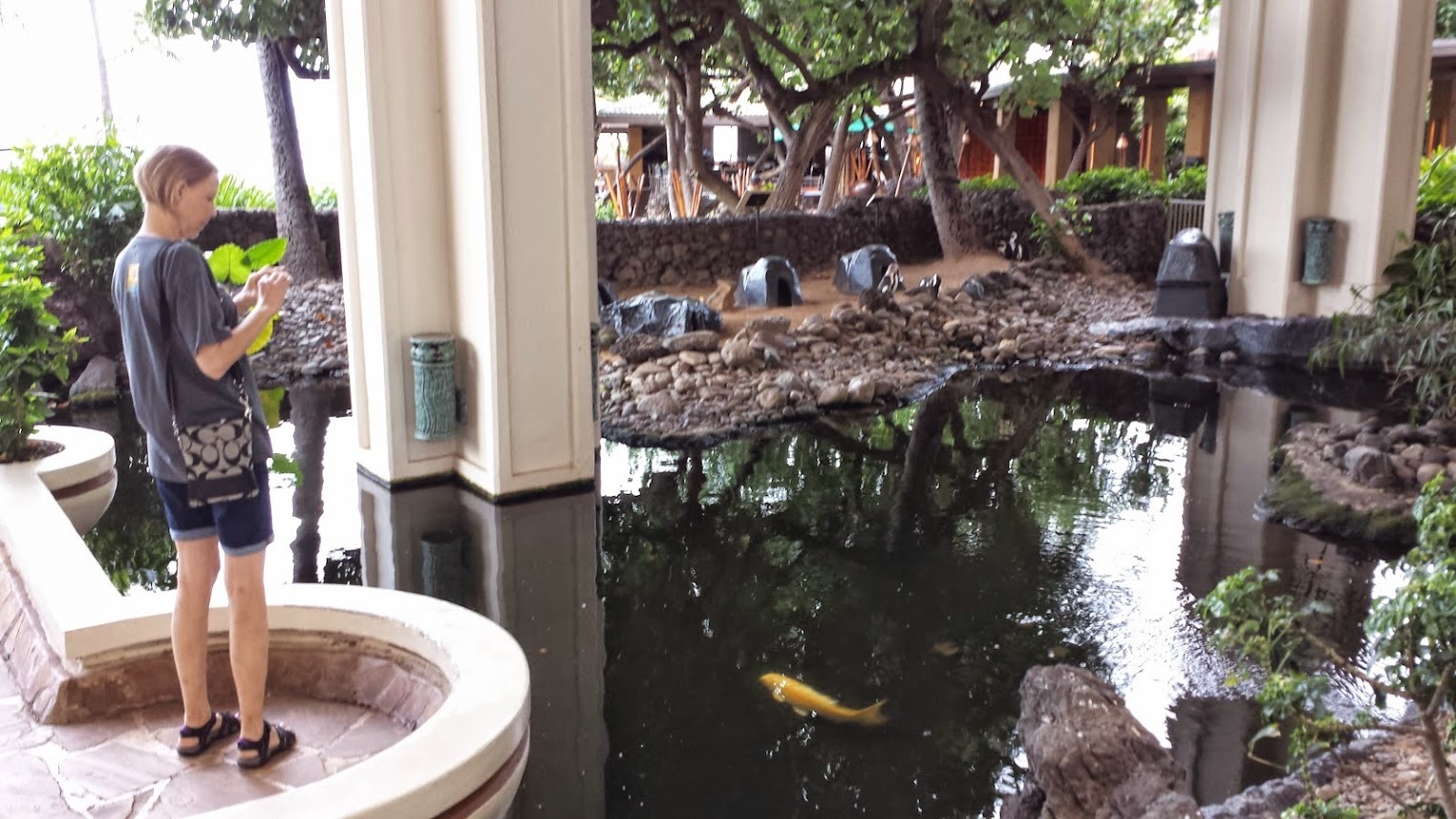 And posing on the lookout point at the hotel. 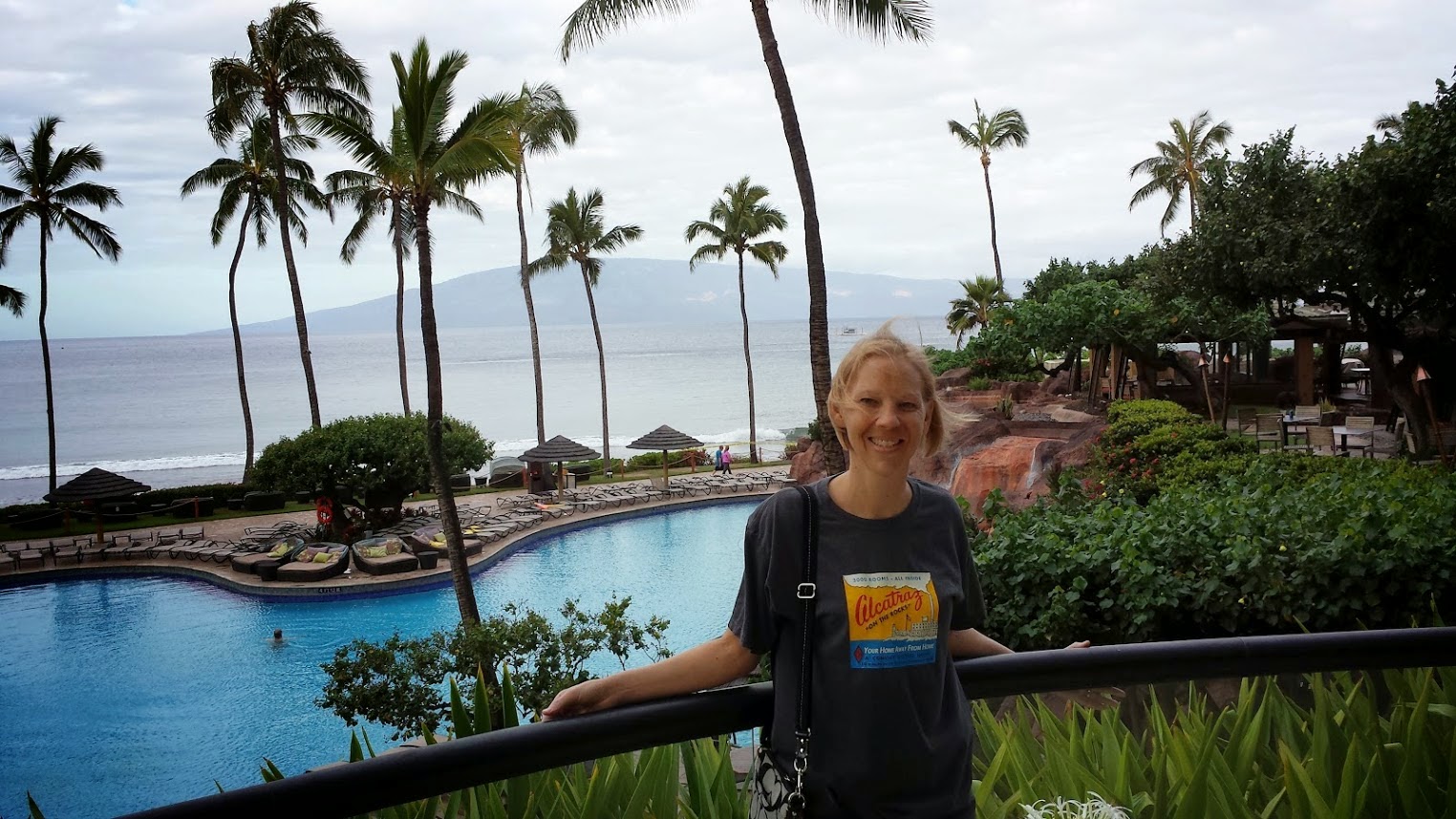 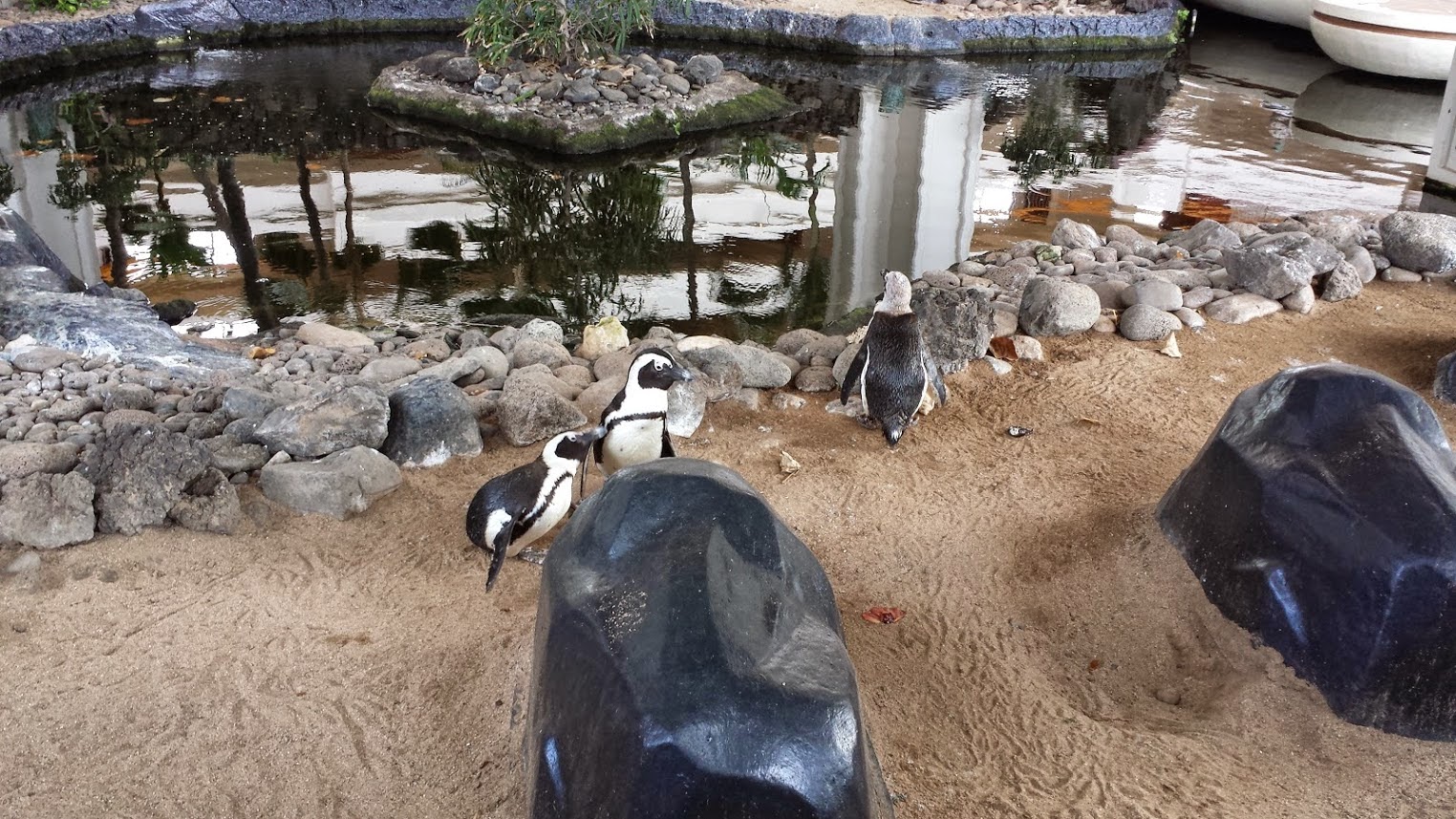 We drove south to a beach with some great snorkeling.  Lots of great fish and coral.  Was a little paranoid as I could see pretty far out, and there aren't many other snorkelers which meant if something was going to get curious, it was going to get curious about just us.  But we were okay.  The beach was phenomenal and I did lots of just plain swimming.

Jamie was headed back out for some more snorkeling and was walking back out when a ray large enough that I saw it from 25 feet away underwater swam right in front of her and she did an immediate about-face, and that ended the snorkeling.  Rays are fine, of course, but there's nothing like a close encounter.

The picture below was taken on the way back in some sugar cane fields.  I assume it's part of sugar cane storage or something. 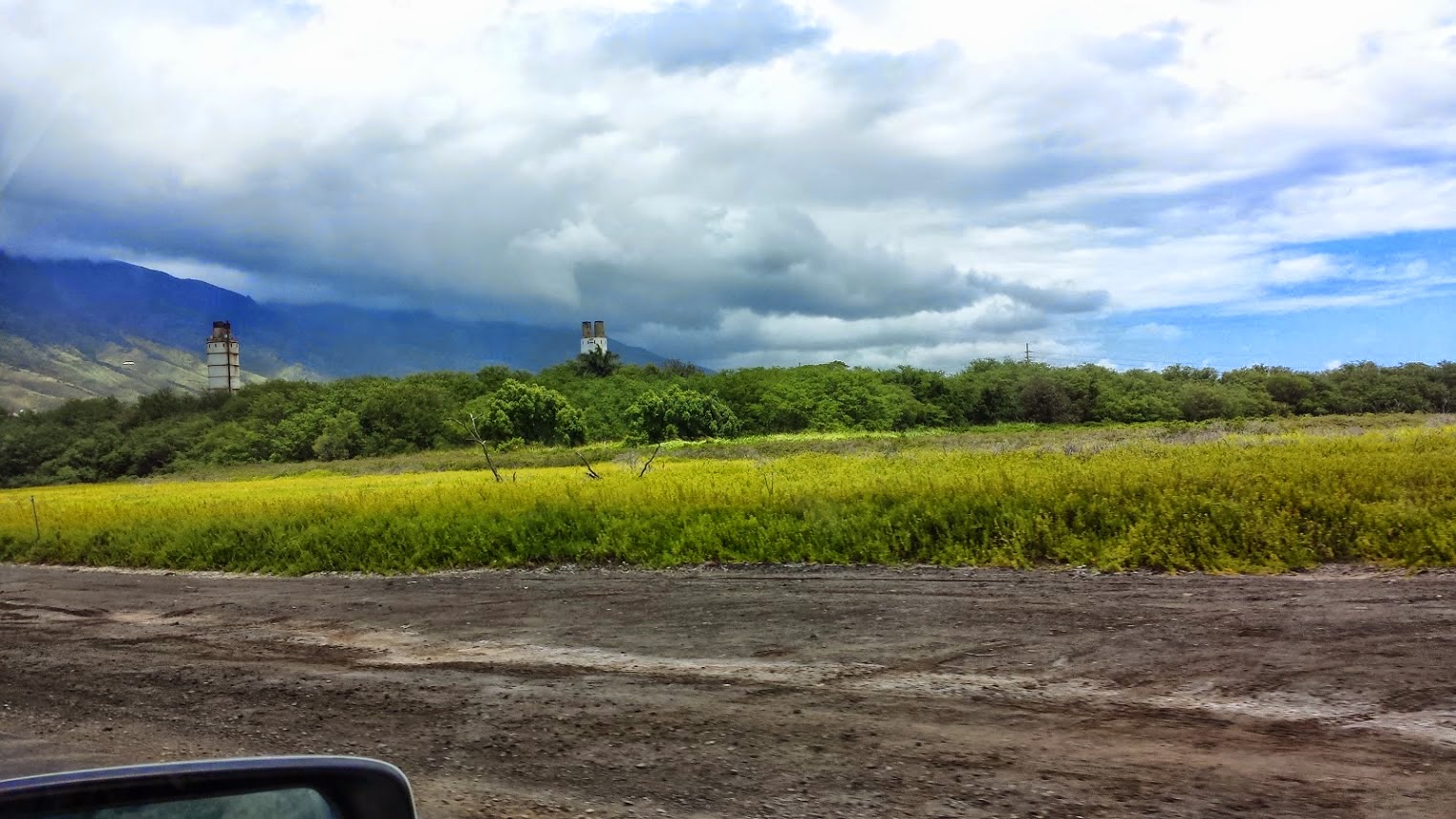 Monday night we went to a Luau.  While it was cheesy, it was also fun cheesy.  I like a good bit of professional-grade cheese.  And Jamie rightfully guessed that I was super-jealous of the MC, because, yes, that is the sort of thing I would be doing for a living if I could figure it out.

Hula Girls before the show. 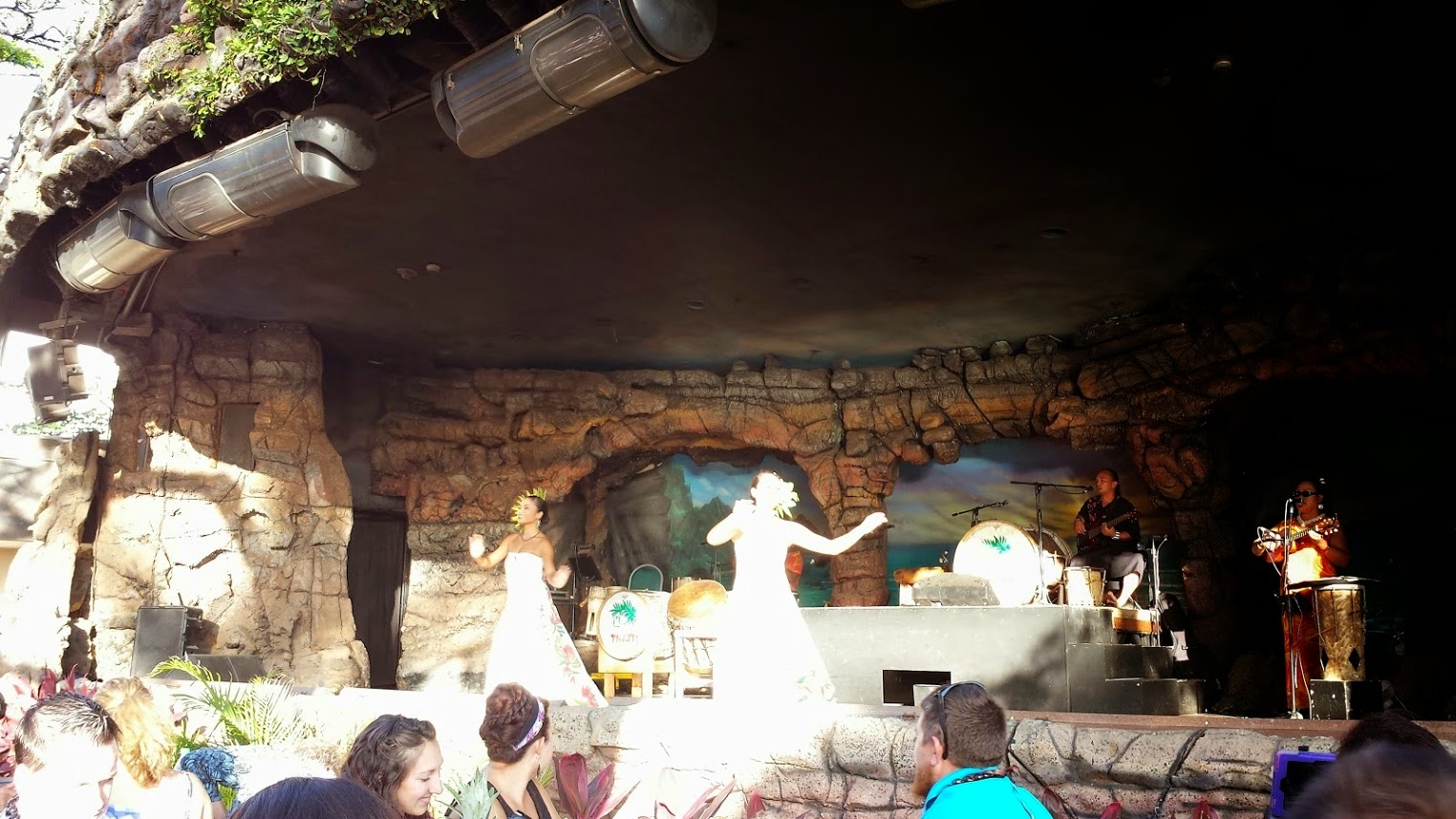 A lava lava fashion show - how to wear your Polynesian garb. 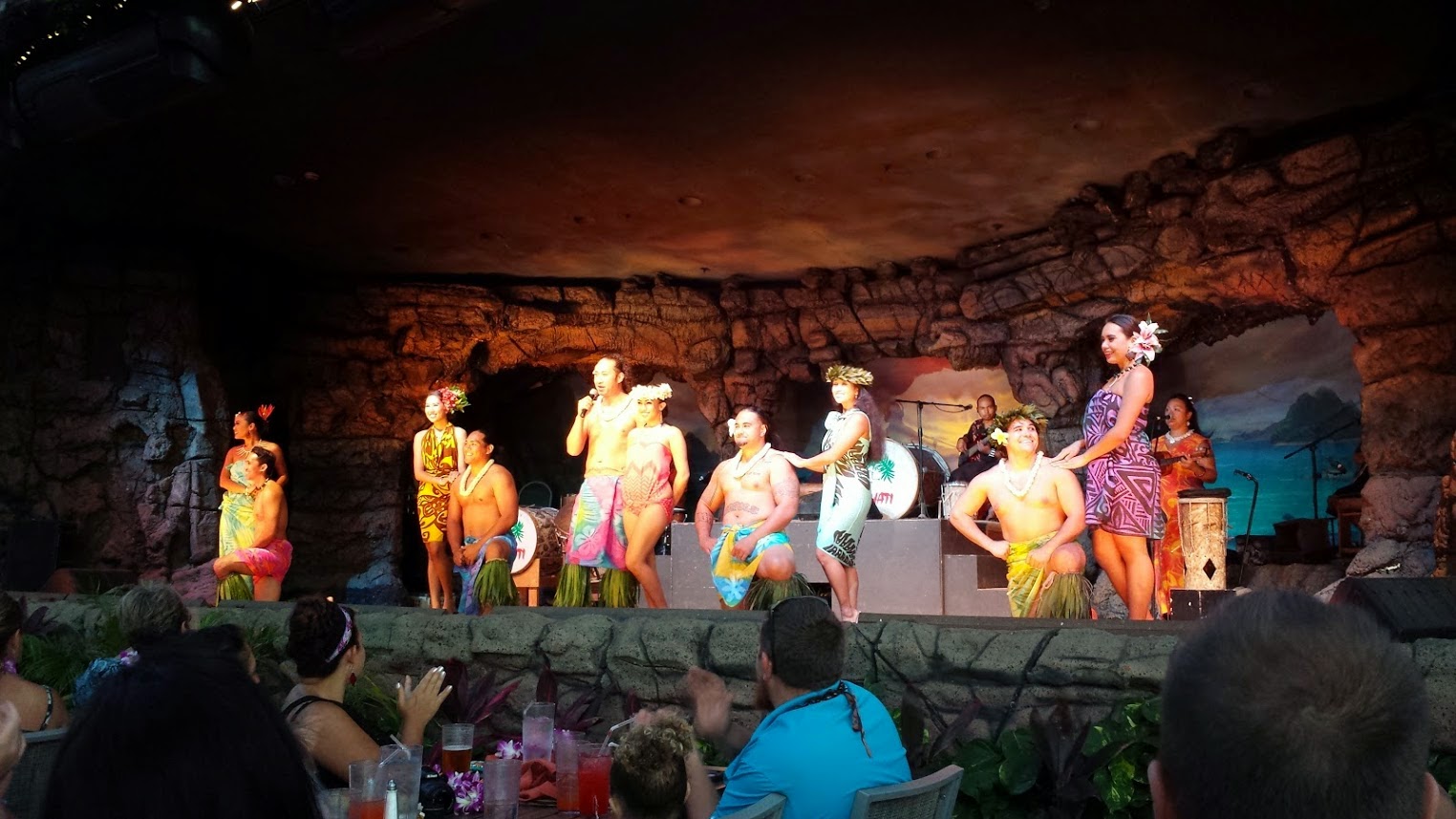 The dudes at work. 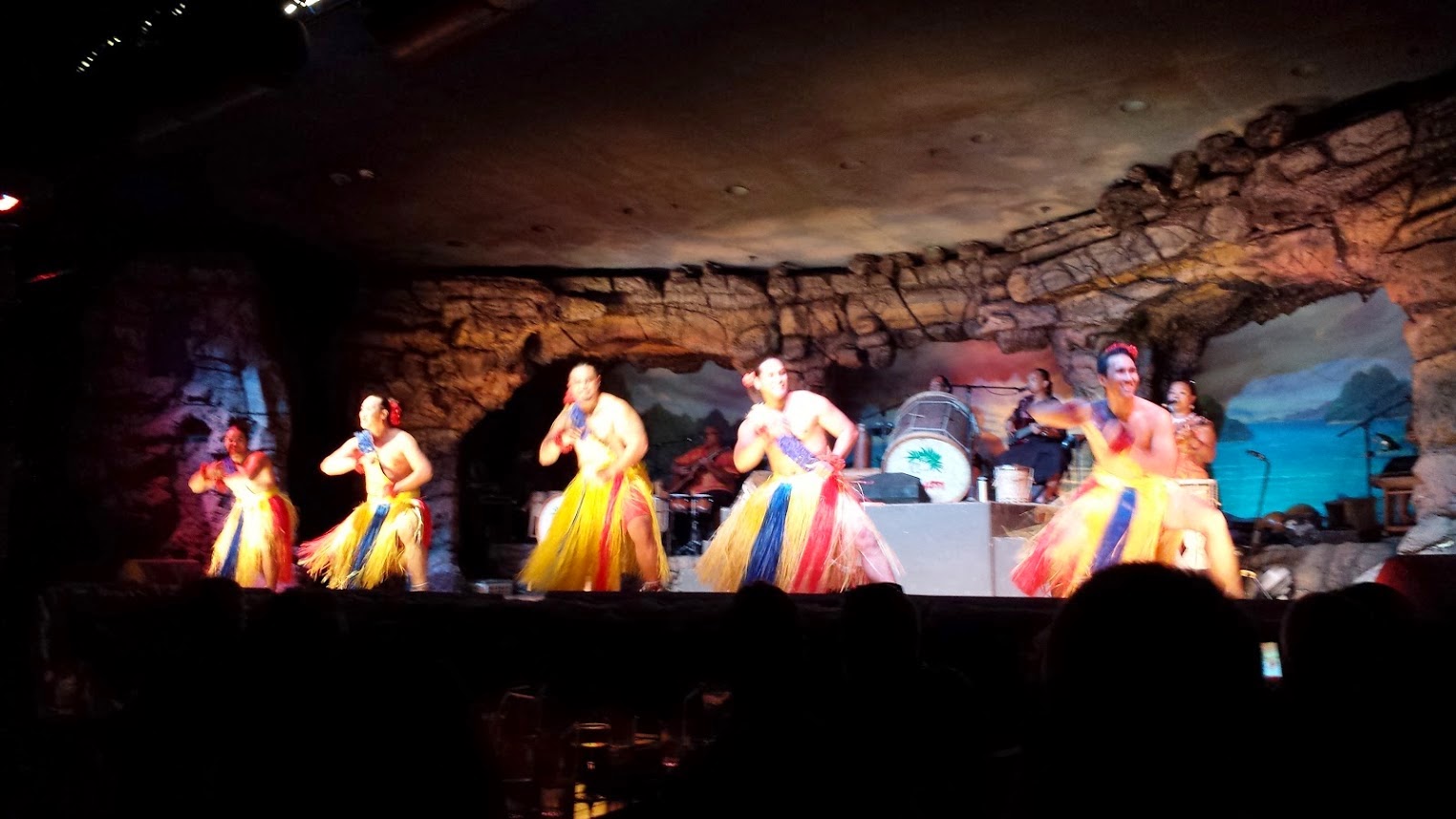 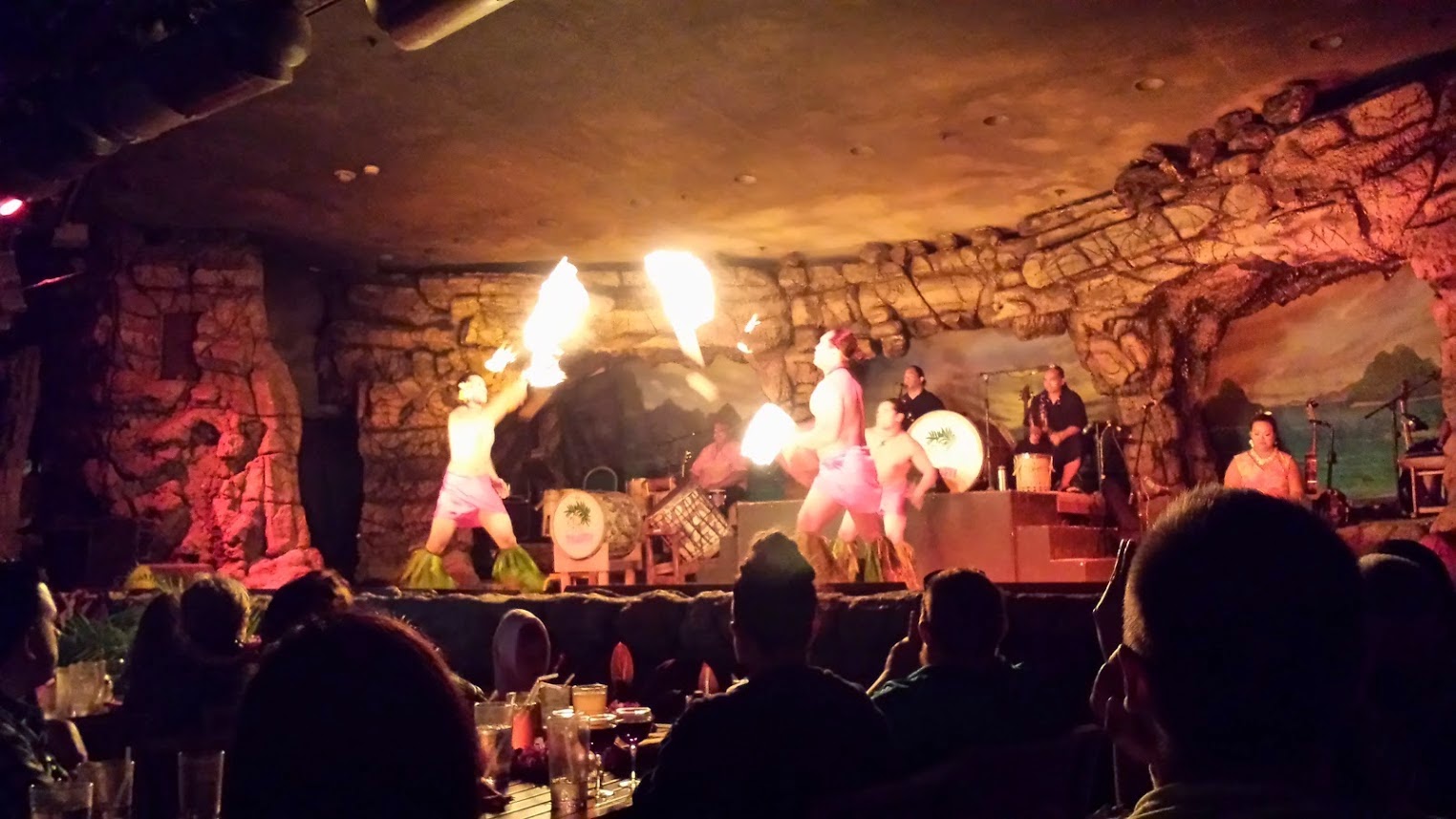 As touristy as we wanna be. 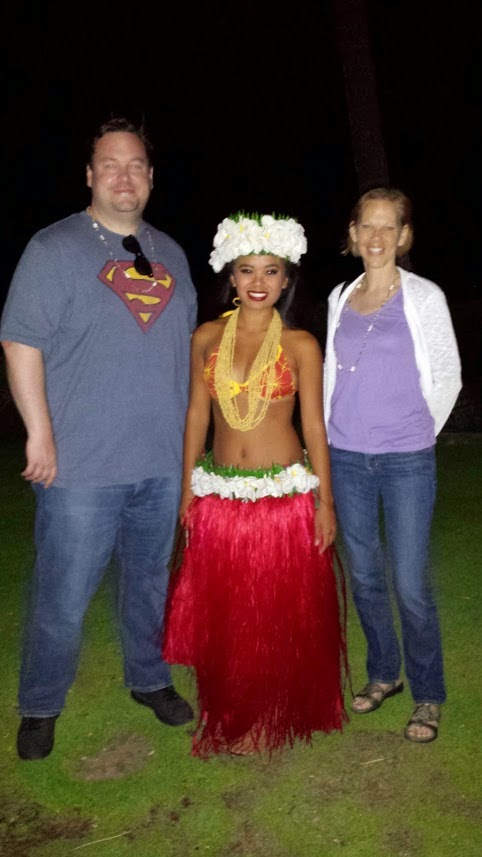 The only downside to the evening - those Mai Tai's were a little thrifty on rum.